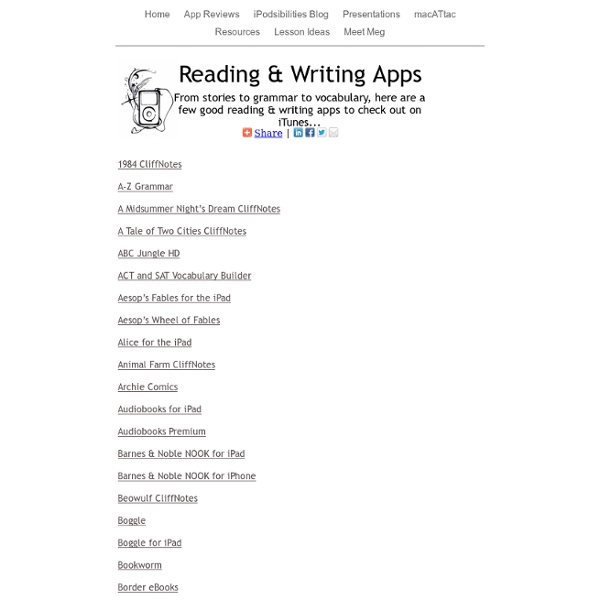 bloomsapps Using Blooms Taxonomy in education is a highly effective way to scaffold learning for the students. With the recent popularity and pervasive nature of iOS devices in school districts it is essential for educators to understand how to implement Blooms in the classroom using the apps that are available. While this list is by no means fully comprehensive, it will assist educators in getting started when implementing iOS devices in the classroom. This site will change almost daily as it will be updated with new and exciting apps! If you find any that you have worked with in your classroom please email dmileham@e1b.org or tweet @bloomsapps or @dmileham75 with your suggestions.

Google Apps for iPad Productivity Tips To increase efficiency, it helps to add any commonly-accessed websites, such as the Google eBookstore or Google Docs, to the home screen as a bookmark. This allows the shortcut to show up as an app icon, taking users directly where they need to go. How to Set Up Gmail for School iPads and iPods One challenge for teachers with students using devices like iPad and iPod touch is collecting student work. Unfortunately, there is not one consistent way for apps to export what a user creates. Some apps connect to Dropbox, some share through iTunes, some export to a website, some share through an IP address, but most apps email content as an attachment. In order to send images, movies, and documents as an attachment, email must be set up on the device. Logging in through web-based mail won't work because you cannot attach files when using web mail in iOS. Email has to be set up in iOS's Mail app in order for an app that shares through email to actually be able to send.

Preposition Builder Preposition Builder, by Mobile Education Store, is another feather in Kyle Tomson’s hat! This dedicated dad has been developing solid speech & language apps for quite some time and Preposition Builder moved him into the mainstream. This app is a wonderful learning tool for all kids at some point in their development. We found this app especially helpful with ESL students, of all ages. Afraid of Programming in Code? Try Scratch For Arduino I’m an Arduino novice. I’ve used my starter kit for a few simplistic projects with my 12-year-old, but outside of that I haven’t ventured further due to my fear of code. Sure, I can knock out some HTML and CSS with the best of them, but when it comes to actual programming, I’m pretty useless. Scratch 4 Arduino could just change that. It’s not coding; but it allows novices like me to build exciting Arduino projects with a visual interface. It’s not going to teach you how to how to program, but it does teach fundamental principles that are useful should you decide to progress to “real” programming.

- Best iPad App Developers 0 Comments December 19, 2011 By: Vicki Windman Dec 18 Written by: 12/18/2011 5:09 PM Top 200 best iPad apps 2012 If you've got yourself an iPad Air or new iPad mini, you'll want to start downloading the best iPad apps straight away. And if you already have an iPad 4 or older iPad, you might want to update it with some new apps. It's the apps that really set iOS apart from other platforms - there are far more apps available on the App Store for the iPad than any other tablet. So which which ones are worth your cash?

Turning Students Into Teachers "The best way to learn anything is to teach it to someone else". Isn't that what you've always been told? It's true ... and also a great philosophy to apply in the classroom. Educreations: DIY Whiteboard Video Tutorials on the iPad The new app from Educreations is available in the Apple App Store today (iTunes link). The app is designed to make it easy to create, narrate, and record whiteboard video tutorials on the iPad and to share them with others. A Web version of the startup's whiteboard app has been available for some time now, but it's the native app for an iPad that makes this sort of tool make sense -- it's so much easier to write on a whiteboard with the finger than it is with a mouse, if nothing else. Educreations is hardly the only app like this available for the iPad (I covered the very similar app ShowMe over on MindShift this summer, for example). But while Educreations' iPad app might be late to the whiteboard app market, its entry is a solid one. Educreations hosts the video creations themselves on educreations.com (helpful for schools that block YouTube), and teachers using the site can opt to share videos privately with a set group of students or share them publicly so anyone can see them.

30 Useful iPad Apps for Business & Presentation Apple sold more than 1 million copies of iPads in the first 3 months. This gadget is definitely more than just a larger version of iPhone or iPod touch. With 4x the screen of an iPhone, the iPad’s display is ideal for reading and for presentations. In today’s post, we’d like to highlight some really useful iPad applications that might replace the things you do daily with your laptop or netbook. With a piece of iPad and these applications, you probably don’t need to carry a laptop around. Here are 30 useful iPad applications for Business and Presentation you might find handy on your next project pitch or business trip.