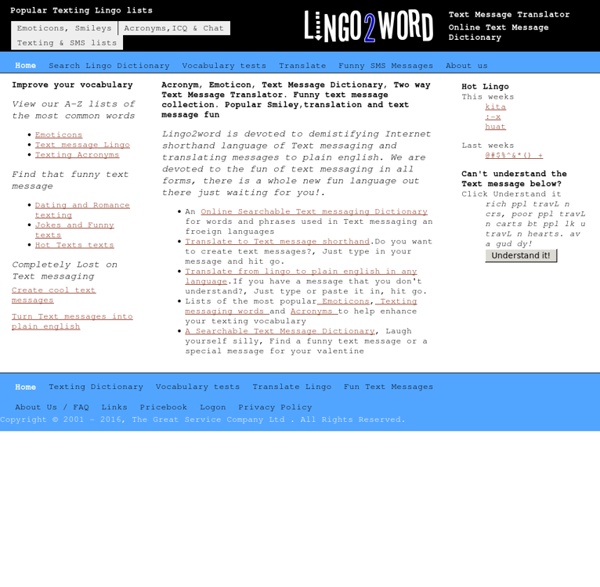 Text Messaging, Chat Abbreviations and Smiley Faces - Webopedia Updated November 16, 2016 / Posted March 01, 2004 By Vangie Beal This chat guide lists more than 1,460 text message and online chat abbreviations to help you translate today's texting lingo. With the popularity and rise in use of online text-based communications came the emergence of a new texting language, tailored to the immediacy and compactness of these new communication media. While it does seem incredible that there are thousands of text abbreviations, keep in mind that different chat abbreviations are used by different groups of people. Top 10 Text Abbreviations According to search query data the following 10 text abbreviations are the most requested chat definitions: What does rofl mean? List of 1,461 Online Chat and Text Message Abbreviations To keep our chat guide user-friendly for all ages, some inappropriate words have been edited to include an alternate meaning. Numbers & Characters A B C D E F G H I J K L M N O P Q R S T U V W X Y Z The History of Text Messaging

13 Internet Slangs with Unexpected Alternate Meanings We've all grown accustomed to the online jargon, shorthands and acronyms that have developed over decades of Internet use. Silly as they might be, most of us are guilty of truncating, abbreviating or misspelling words to save a few seconds here and there. The jury is still out on whether the seconds have added up to much or not, but linguists have had a field day studying online lingual behaviors and their effects on offline writing and speech. Nevertheless, it's interesting to look at how pre-Internet acronyms and abbreviations like "LOL" have taken on new meanings ("laughing out loud") with the introduction of widely popular Internet idioms. Below, you'll find a list of 13 Internet acronyms and slang terms with unexpected alternative meanings, ranging from downright unpredictable to hilariously ironic. Before netizens had us "laughing out loud," there were little old ladies participating in less bone-tickling happenings. A study published by Peter E. Are you a Star Wars fan? And U?

Text messaging Text messaging, or texting, is the act of composing and sending a brief, electronic message between two or more mobile phones, or fixed or portable devices over a phone network. The term originally referred to messages sent using the Short Message Service (SMS). It has grown to include messages containing image, video, and sound content (known as MMS messages). The sender of a text message is known as a texter, while the service itself has different colloquialisms depending on the region. It may simply be referred to as a text in North America, the United Kingdom, Australia, New Zealand and the Philippines, an SMS in most of mainland Europe, and a TMS or SMS in the Middle East, Africa and Asia. Text messages can be used to interact with automated systems to, for example, order products or services, or participate in contests. History[edit] The concept of the SMS (Short Messaging Service) was created by Friedhelm Hillebrand. Message format[edit] Uses[edit] Applications[edit]

MMS Architecture The Multimedia Messaging Service (MMS) is organized over a set of several network elements. One objective of MMS is to deliver a messaging service interoperable with existing mobile messaging system like SMS and EMS but which is also interoperable with existing fixed messaging system such as E-mail Service. The MMS architecture includes the software messaging application in the MMS capable mobile device necessary for the composition sending and receipt of the message. In addition other elements in the network infrastructure are required to route messages, to adapt the content of messages to capabilities of receiving devices etc. The MMS user Agent is the software application shipped with the mobile handset which allow the composition, viewing, sending and retrieval of multimedia messages. The MMS environment (MMSE) refers to the set of MMS elements under the control of a single administration (MMS provider) in charge of providing the service to the MMS subscribers

How to Read SMS/MMS in UIQ Developing your SMS Text Message Database « McCormick Mobile Media January 29, 2010 by mccormickmobilemedia I had two meeting this week where the first question was, “how many names are in your databases and how much does it cost?” Frankly, this is the most common question I get and two things happen every time: First, the look of dissappointment when I say “I don’t have any databases. Here’s some ideas to develop your database: The Ask, i.e. For national advertisers including a Text offer in an ad is as important as the phone # and URL. The Incentive. The Contest. You can also give away tickets to an event/concert that your audience would enjoy. The Vote & The Survey. These are types of promotions and recommendations we help our clients with everyday. Like this: Like Loading...

With Twilio, SMS short codes aren’t just for big companies any more SMS service enabler, Twilio, brought its new short code SMS product out of testing today and showed it off onstage at the MobileBeat 2011 conference in San Francisco. Short codes, in essence, are 6-digit numbers that can be marketed to customers as a quick way to contact a company. But Twilio says they’re incredibly underused. Twilio chief executive, Jeff Lawson likened them to the Ghost Busters twinkie. Twilio blames the lack of widespread short code adoption on the price and application process. Twilio is similar to an aggregator, but its mission is to simplify the short code application process and enable smaller companies to join the SMS noise. “Before we even launched the product, we’d expanded the market by 6%,” said Lawson “Just goes to show the value of a simple pricing model, straight forward, easy API – making it easy for people to consume.”

SMS GupShup raises $10M for text-message social networks Beerud Sheth, a serial entrepreneur in India, figured out the way to reach the most people was not through computers or smartphones. It was through old-fashioned text messages on aging feature cell phones. His Mumbai, India-based company, SMS GupShup has set up social networks in India that work via text messages. Now it has become India’s largest social network with more than 50 million users and the company is announcing today it has raised $10 million in a new round of funding. “It’s a low-tech platform,” Sheth said in an interview. The fifth round was led by Tenaya Capital and it includes existing investors Globespan Capital Partners, Helion Ventures, and Charles River Ventures. Sheth said the company will use the money to move into new markets and expand its team. The SMS GupShup model works well because of the way Indian carriers charge for text messages. With SMS GupShup, users can sign up for interest-based groups that effectively become mini social networks.