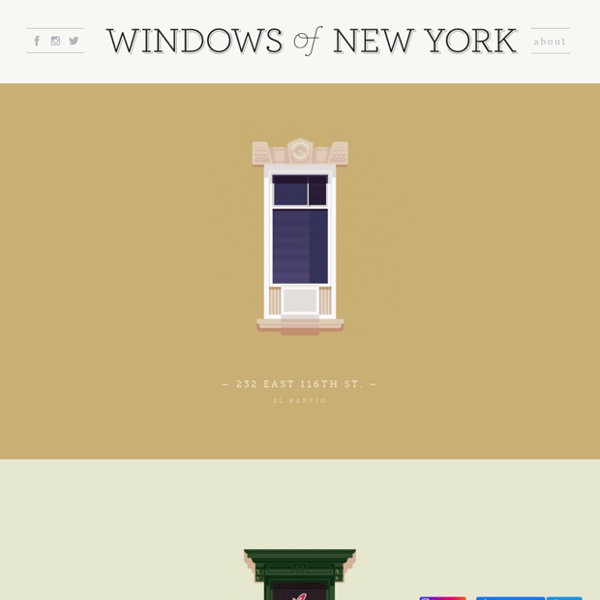 The Windows of New York project is a weekly illustrated fix for an obsession that has increasingly grown in me since chance put me in this town. A product of countless steps of journey through the city streets, this is a collection of windows that somehow have caught my restless eye out from the never-ending buzz of the city. This project is part an ode to architecture and part a self-challenge to never stop looking up. I am a Graphic Designer living in New York City. And I like windows. www.joseguizar.com • hola@joseguizar.com

Justin Johnson - Smoke & Mirrors The Story... Justin Johnson's highly anticipated double album "Smoke & Mirrors" is the most comprehensive musical statement yet made, about the past, present, and future of handmade American Roots instruments~ A sensory immersive musical journey that will have you spellbound from the first note. The "Smoke" album highlights the builds of some of the most talented, innovative, and artistic luthiers in the world today. "Smoke" was recorded at the legendary Sun Studio, the “Birthplace of Rock & Roll,” using the studio’s combination of vintage equipment and modern technology to showcase the corresponding qualities in the 18 modern roots instruments featured.

BBQ Official poster of the SXSW Film Festival 2014 (Austin, Texas). In collaboration with Gravillis. Austin's symbols : - Paramount Theater - Food Trailer Parks - South Congress Bridge bats (- The Texas Capitol) "Our goal was to create a poster that did not feel like it could be easily digitally reproduced. Ultimately, we wanted to embrace the 'do-it-yourself' ethos that SXSW has shown each year with their creative and imaginative footprint at the festival.” -Gravillis Inc. Direction, Crafts, Illustration2014 The French NGO Ecofolio, who works to show the benefits of recycling, asked the agency June21 to promote this idea in a national print campaign.

Norwegian travel documents receive a minimal makeover News: Oslo-based Neue Design Studio has won a competition to redesign Norway's passports and ID cards, a month after graphics by Snøhetta were chosen for the country's new bank notes. Neue Design Studio's proposal, based on the theme The Norwegian Landscape, was selected by a jury earlier this month as the winning scheme to overhaul Norway's travel documents for "the simplicity of the solution". "Of the submissions for the new Norwegian passports and ID cards, The Norwegian Landscape has been chosen as the best concept," said the jury's statement. "It both illustrates the Norwegian identity and makes sure the passport will be viewed as a document of high value." Inside the passports, double-page spreads are illustrated with minimal images of landscapes from different parts of the country. "Nature has always been an essential part of the Norwegian identity and tradition, as well as being a key fundament for our welfare," said Neue Design Studio.

Use of Blur Backgrounds in Website Design: Beautiful Examples Together with wide screen photo backgrounds which are frequently used tools for website decorations, blur backgrounds have thoroughly settled and found their niche in modern website design. Although, at first glance, it is rather difficult to understand what could be so amazing and attractive in blur technique that instantly kills all the detail of spectacular shot or image. But as a matter of fact, it has a whole bunch of advantages that, on the contrary, helps to stress aesthetic side, and make your design sophisticated and elegant. In addition, such backgrounds are able to add readability to your titles and taglines, focus attention on specified elements, easily make foreground elements stand out, and finally contrast and highlight color schemes.

The Art of Negative Space. on Behance Sign Up Log In The Art of Negative Space. Project Featured On: illustrated recipes what better way to celebrate the beginning of spring in rome than to take advantage of the explosion of globe artichokes that overflows on market stalls around every corner? My mama has always cooked a lot of artichokes, this round, typically roman variety when we lived here, and other varieties in australia, but i never really appreciated them until i got a little bit older, and i never had the patience to learn how to clean them and cook them. until i figured out it wasn't so hard at all. artichokes / carciofi are beautiful to draw too. now, because this is not a cooking blog and the illustrated recipes give importance to drawings rather than precise methods and culinary perfection, i recommend you head over to rachel's artichoke post if you want clear instructions on cleaning and prepping the chokes, other than this, it's super simple and delicious.

Ink Calendar by Oscar Diaz Spanish designer Oscar Diaz has designed a calendar that uses the capillary action of ink spreading across paper to display the date. Update: this project is included in Dezeen Book of Ideas, which is on sale now for £12. Each month, a bottle of coloured ink spreads across a sheet of paper embossed with numbers, colouring them in as it goes. Ink Calendar will be exhibited at an exhibition called Sueños de un Grifo - Diseño con Alma de Agua that opens at the Círculo de Bellas Artes in Madrid today. See also our story about the Dramprom light by Roger Arquer that appears in the same exhibition. Here's some info from Diaz:

Satirical Illustrations Of Today’s Problems Drawn In The Style Of The 50s John Holcroft is a well-known British illustrator who has worked for BBC, Reader’s Digest, The Guardian and the Financial Times, among others. However, what makes him famous are not his employers, but the brilliant satire reflected in his illustrations and the retro style he uses to create them. Everytime Holcroft publishes a new drawing, they inevitably go viral and spread all over the Internet. His style is based on advertisements from the 50’s, and he reproduces everything from their visual design style down to their aged vintage feel. The content of these illustrations, however, is anything but old-fashioned – social issues and modern behavior drawn in a satirical way. The issues he focuses on include our dependence on technology, society’s greed and the devaluation of workers, just to name a few.

united.colors.of.black Older → Reblogged 8 months ago from fastdays-longnights (Originally from mineyoursourswhatever) 420,700 notes View comments Reblogged 9 months ago from a-t-o-m-i-c (Originally from tight---jeans) 32,676 notes View comments Reblogged 9 months ago from patchill (Originally from mortur) 177 notes View comments Typography - LuGreen Typography The series of works with hand-drawn typography. You make me feel so lazy. Nostalgic Illustrations By Hollis Brown Thornton South Carolina-based artist and illustrator Hollis Brown Thornton creates drawings that depict now-obsolete technology of decades past, including cassette tapes, VCR tapes, floppy disks and old video games. Using permanent markers, which means that there is little margin for error, he creates nostalgia-inducing drawings of these defunct tech products, often stacked up and packed together to create mesmerizingly colorful compositions. We can still remember that the drawers in our childhood homes used to look a lot likes this. The striking illustrations are available as prints here. All images © /Hollis Brown Thornton | Via: Design Taxi