Who the Fuck is Jacques Ranciere? 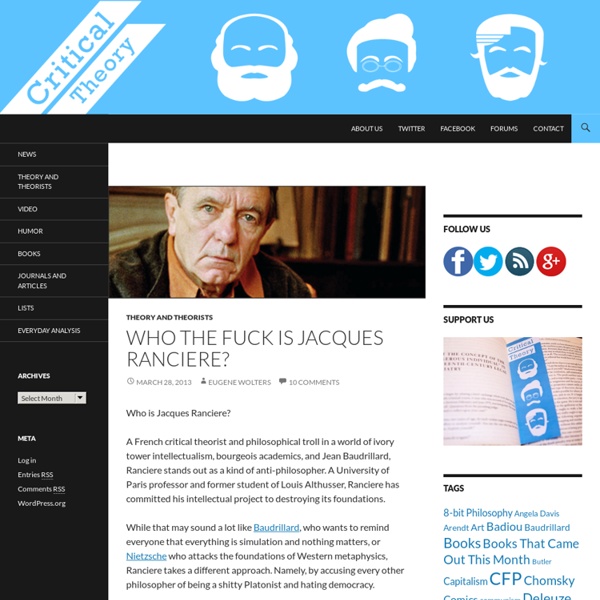 Who is Jacques Ranciere? A French critical theorist and philosophical troll in a world of ivory tower intellectualism, bourgeois academics, and Jean Baudrillard, Ranciere stands out as a kind of anti-philosopher. A University of Paris professor and former student of Louis Althusser, Ranciere has committed his intellectual project to destroying its foundations. While that may sound a lot like Baudrillard, who wants to remind everyone that everything is simulation and nothing matters, or Nietzsche who attacks the foundations of Western metaphysics, Ranciere takes a different approach. While other philosophers deconstruct the metaphysical tradition and replace it with their own project, Ranciere’s philosophy can be summed up by “meh, people will figure it out.” #1 “Fuck the Police” is Pretty Much his Definition of Politics This counts. In his “Ten Theses on Politics”, Ranciere makes a simple claim. What the Fuck is Dissensus? #2 He Doesn’t Get Along with his Colleagues And they did. Related:  Theory Cultural Contemporary

Ranciere, Politics, Aesthetics, and OOO | Larval Subjects . Over at Intra-Being and Algorithm and Contingency, both Andre and Robert have written some interesting posts responding to the recent discussion of OOO and politics. In his post, Robert rightly worries that Ranciere’s politics is too human centered. As Robert writes: Whilst Levi’s mediations on Ranciere’s political schema are noteworthy and promising, the outcome of Ranciere’s manoeuvres, (particularly in his, very current and influential visual aesthetic criticism: see The Emancipated Spectator and The Politics of Aesthetics) are not only contingent on human behaviour (which Levi notes) but are also contingent on a wholly relational indeterminate system. This is quite right: Ranciere perpetually speaks of humans as that around which politics revolves. I call the distribution of the sensible the system of self-evident facts of sense perception that simultaneously discloses the existence of something in common and the delimitations that define the respects parts and positions within it.

Jacques Rancière Jacques Rancière (born 1940) is a French philosopher, Professor of Philosophy at European Graduate School in Saas-Fee and Emeritus Professor of Philosophy at the University of Paris (St. Denis) who came to prominence when he co-authored Reading Capital (1968), with the structural Marxist philosopher Louis Althusser.[1] Life and work[edit] Rancière contributed to the influential volume Reading Capital (though his contribution is not contained in the partial English translation) before publicly breaking with Althusser over his attitude toward the May 1968 student uprising in Paris; Rancière felt Althusser's theoretical stance didn't leave enough room for spontaneous popular uprising.[2] Since then, Rancière has departed from the path set by his teacher and published a series of works probing the concepts that make up our understanding of political discourse, such as ideology and proletariat. Influence[edit] Selected bibliography[edit] Rancière's work in English translation Further reading

Shigeru Mizuki Shigeru Mizuki (水木 しげる, Mizuki Shigeru?, real name: Shigeru Mura, born March 8, 1922) is a Japanese mangaka, most known for his Japanese horror manga GeGeGe no Kitaro (which was originally titled "Hakaba Kitaro"), Kappa no Sanpei and Akuma-kun. Originally from Sakaiminato in Tottori prefecture, he resides in Tokyo. His pen-name, Mizuki, comes from the time when he managed an inn called 'Mizuki Manor' while he drew pictures for kamishibai. A specialist in stories of yōkai (a sub-genre in Japanese horror), he is considered a master of the genre. He is also known for his World War II memoirs and his work as a biographer. Life[edit] Born in the coastal town of Sakaiminato, Mizuki was originally named Shigeru Mura (武良 茂 Mura Shigeru), the second of three sons. However, in 1942, he was drafted into the Imperial Japanese Army and sent to New Britain Island in Papua New Guinea. In 2010 NHK broadcast an asadora about his married life, Gegege no Nyobo, based on his wife's autobiography. Manga[edit]

Chomsky: Thinking Like Corporations is Harming American Universities The following is an edited transcript (prepared by Robin J. Sowards) of remarks given by Noam Chomsky last month to a gathering of members and allies of the Adjunct Faculty Association of the United Steelworkers in Pittsburgh, Penn. On hiring faculty off the tenure track That’s part of the business model. The effective owners are the trustees (or the legislature, in the case of state universities), and they want to keep costs down and make sure that labor is docile and obedient. The idea is to divide society into two groups. This idea is sometimes made quite overt. At the time, everyone regarded Greenspan’s comment as very reasonable, judging by the lack of reaction and the great acclaim he enjoyed. That’s the way you keep societies efficient and healthy from the point of view of the corporations. That’s one aspect, but there are other aspects which are also quite familiar from private industry, namely a large increase in layers of administration and bureaucracy. On the love of teaching

Jacques Rancière - Professor of Philosophy Jacques Rancière (b. 1940 in Algiers) is Professor Emeritus at the Université de Paris (St. Denis). He first came to prominence under the tutelage of Louis Althusser when he co-authored with his mentor Reading Capital (1968). After the calamitous events of May 1968 however, he broke with Louis Althusser over his teacher's reluctance to allow for spontaneous resistance within the revolution. For Jacques Rancière, the idea of equal intelligence shines a light on the status of political equality; ordinary people should have a presumption of intelligence, in the same way we offer a presumption of innocence. There is, in Jacques Rancière's vision, a surprising level of trust in the word and the image, one of an almost anti-hermeneutical structure. Jacques Rancière's books have covered pedagogy, the writing of history, philosophy, cinema, aesthetics and contemporary art.

Shōwa period The Shōwa period (昭和時代, Shōwa jidai?), or Shōwa era, is the period of Japanese history corresponding to the reign of the Shōwa Emperor, Hirohito, from December 25, 1926, through January 7, 1989.[1] The Shōwa period was longer than the reign of any previous Japanese emperor. During the pre-1945 period, Japan moved into political totalitarianism, ultranationalism and fascism culminating in Japan's invasion of China in 1937. This was part of an overall global period of social upheavals and conflicts such as the Great Depression and the Second World War. Defeat in the Second World War brought about radical change to Japan. In these ways, the pre-1945 and post-war periods regard completely different states: the pre-1945 Shōwa period (1926–1945) concerns the Empire of Japan, while post-1945 Shōwa period (1945–1989) was a part of the State of Japan. Etymology[edit] End of "Taishō Democracy"[edit] Washington Conference to Mukden Incident[edit] In 1924, however, friendly U.S. Rise of nationalism[edit]

Introduction to Object Oriented Ontology | The DEW Lab This introductory guide to Object Oriented Ontology is an on-going collection of central theses and surrounding debates. If you’d like to submit a text, blog, or discussion thread that you think is particularly useful to the would-be OOO scholar you can post a link in the comments or email me at steve[at]thedewlab.com If you’re interested in OOO then there are few scholars better equipped to guide you than Levi Bryant, Ian Bogost and Timothy Morton. In 2010 all three scholars presented on a panel at the RMMLA conference in Albuquerque, New Mexico. This 90 minute recording offers an accessible introduction to OOO (Bryant – 0-36:37), the influence of OOO philosophy on scholarly practices (Bogost – 36:27-105:44), as well as the resonance between object oriented ontology and climate change (Morton – 105:44-134:31) Lexicon here Intrigued? OOO is one of those rare projects to unfold, one may even say gestate, in the open forum of the world wide web. “Operational closure is not a happy thought.