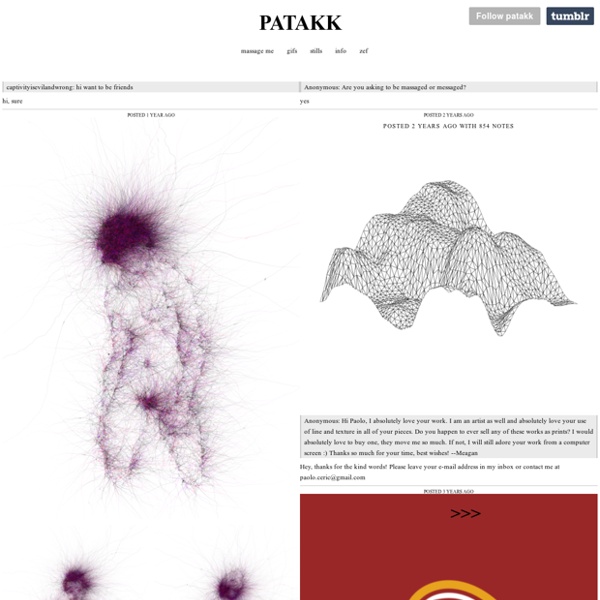 Anonymous: Ola! Can you tell me in which programming language you use, processing2 or something else? Amazing work :) !! posted 8 months ago Anonymous: Hey just wondering if i could have your permission to use one of your gifs as part of my bands logo, thanks Give me one reason why should I let you do that and I will.

Animated Gifs An artist known only as Rrrrrrrroll will leave you spinning with some gif art that works hard to put the art in the gif genre. And yes that was intended as a pun. I guess you could think of the work as ‘animated photography’. If you know or find any more information about the artist please drop a line or two in the comment section. So I sorta owe Matthew DiVito AKA Mr. Collision Detection Jeff Thompson The collision of objects underlies most game experiences and user-interfaces. Baseball bats collide with balls, zombies bump into walls, and Mario lands on platforms and stomps turtles. Even something as simple as clicking a button (a rectangle) with your mouse (a point) is a collision.

Demonic Males: Apes and the Origins of Human Violence By Richard Wrangham, Dale Peterson. Chapter One: Paradise Lost “You will be killed!” mr. div all in our heads // video 16,984 notes Kris Menace ‘The Entirety of Matter’ // Album art by Mr. Web Relic, the Animated GIF, Becomes Medium for Art More often than not, animated GIFs are reserved for quick chuckles. Cat portals , face palms , and even the occasional girl punch , are this limited media format's bread and butter. But the current crop of digital artists are turning to this former Net-annoyance to create Web-based art.

Male Bats Caught Performing Oral Sex on Females Male bats perform oral sex on females, apparently to make sex last longer, researchers say. These findings, the first discovery of male-to-female oral sex in bats, match prior studies revealing that female bats perform fellatio, or oral sex, on male bats. Scientists analyzed a colony of about 420 Indian flying foxes (Pteropus giganteus) roosting in a single fig tree in southern India, near the village of Nallachampatti. This fruit-eating bat is one of the largest bats in the world. Over the course of more than 13 months, using binoculars and a video camera, researchers witnessed 57 cases of sex ― oral and intercourse ― usually in the morning. Art Topics: Generative Art The term ‘generative art’ is an expansive sub-category of contemporary art and predominantly refers to the use of computer coding systems in the process of making art, and often draws inspiration from themes like modern art's geometric forms, such as in pop art. The generative process embraces experimentation, where the artist carefully controls aspects of the work, whilst allowing some parameters to remain randomised. A feedback loop is thus created, where the artist is constantly tweaking a system to produce different results. Also associated with process art, the practice has its roots in dada, and may be traced to pioneering artists like Harold Cohen, who used computer-controlled robots to generate paintings in the late 1960s, and was considered one of the first practitioners of generative art. Today, the likes of Turner Prize winner Keith Tyson was lauded for his ArtMachine, a complex recursive system that generated detailed propositions for artworks, whilst Sedition artists like

eclectic excerpts delivered to your email every day from editor Richard Vague Today's encore selection -- from Quantum: Einstein, Bohr, and the Great Debate about the Nature of Reality by Manjit Kumar. Albert Einstein (1879-1955), the physicist who developed the theory of relativity, was born and spent his earliest years in Germany: " 'The people of Ulm are mathematicians' was the unusual medieval motto of the city on the banks of the Danube in the south-western corner of Germany where Albert Einstein was born. It was an apt birthplace on 14 March 1879 for the man who would become the epitome of scientific genius. The back of his head was so large and distorted, his mother feared her newborn son was deformed.

SDCI l Sharjah Islamic Arts Festival Theme of the upcoming edition of Islamic Arts Festival (Horizon) The work of art as an influential visual production and an innovative accomplishment features specific essence different from our daily life, the life that we encounter through our senses, feelings and insight. For example, the colors, lines, spaces and dimensions generated within an art painting, reflect systems, links and contents that involve visual elements and other form of elements perceived through our senses and intuition. Based on unlimited choices of creation, the formation of these interactive elements according to certain systems produces a group of values, which remarkably depict the artwork intentional effect, through creating a new visual entity that did not even existed until this individual investigation. The impact associated with any visual form reflects authentic essence, highlighted through its own aesthetics and significations.

iPad Simulator Please How would you rate us? CrapAwesome If you are having issues on "slide to login", double click the slider button Please show your support for our hosting fee by clicking on some ads.