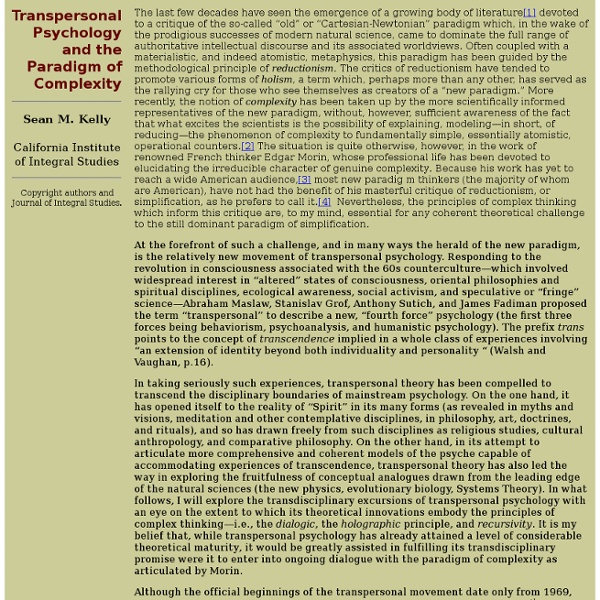 The last few decades have seen the emergence of a growing body of literature devoted to a critique of the so-called “old” or “Cartesian-Newtonian” paradigm which, in the wake of the prodigious successes of modern natural science, came to dominate the full range of authoritative intellectual discourse and its associated worldviews. Often coupled with a materialistic, and indeed atomistic, metaphysics, this paradigm has been guided by the methodological principle of reductionism. The critics of reductionism have tended to promote various forms of holism, a term which, perhaps more than any other, has served as the rallying cry for those who see themselves as creators of a “new paradigm.” At the forefront of such a challenge, and in many ways the herald of the new paradigm, is the relatively new movement of transpersonal psychology. In taking seriously such experiences, transpersonal theory has been compelled to transcend the disciplinary boundaries of mainstream psychology. C. Related:  Wisdom

The Octarine argument. Yes, yes - colour corresponds with real properties. But colour itself is not in the external physical world. It's like those cases where a picture from a telescope or a microscope is given colours artificially to help show up the different substances. The colours are not real, but they do help you understand more about what you're seeing. It turns out that all colour is more or less like that -yes, it's helpful, but that doesn't mean it directly reflects the physical reality. After all, we only actually sense three different wavelengths. If you think about it, though, this means that the way we see things is actually wrong. All the same, it is possible to do a bit better, and some animals detect more than three different wavelengths.

9 Mind-Bending Epiphanies That Turned My World Upside-Down Over the years I’ve learned dozens of little tricks and insights for making life more fulfilling. They’ve added up to a significant improvement in the ease and quality of my day-to-day life. But the major breakthroughs have come from a handful of insights that completely rocked my world and redefined reality forever. The world now seems to be a completely different one than the one I lived in about ten years ago, when I started looking into the mechanics of quality of life. It wasn’t the world (and its people) that changed really, it was how I thought of it. Maybe you’ve had some of the same insights. 1. The first time I heard somebody say that — in the opening chapter of The Power of Now — I didn’t like the sound of it one bit. I see quite clearly now that life is nothing but passing experiences, and my thoughts are just one more category of things I experience. If you can observe your thoughts just like you can observe other objects, who’s doing the observing? 2. Of course! 3. 4. 5.

Slow design Slow Design is a branch of the Slow Movement, which began with the concept of Slow Food, a term coined in contrast to fast food. As with every branch of the Slow Movement, the overarching goal of Slow Design is to promote well being for individuals, society, and the natural environment. Slow Design seeks a holistic approach to designing that takes into consideration a wide range of material and social factors as well as the short and long term impacts of the design. Origin and meaning[edit] Slow Design refers to the goals and approach of the designer, rather than the object of the design. While Fuad-Luke focused on the design of physical products, the concept can be applied to the design of non-material things such as experiences, processes, services, and organizations. Beth Meredith and Eric Storm attempt to summarize the concept, stating: Current and future practice[edit] Common qualities of Slow Design include: See also[edit] References[edit] External links[edit]

User-centered design The chief difference from other product design philosophies is that user-centered design tries to optimize the product around how users can, want, or need to use the product, rather than forcing the users to change their behavior to accommodate the product. UCD models and approaches[edit] For example, the user-centered design process can help software designers to fulfill the goal of a product engineered for their users. User requirements are considered right from the beginning and included into the whole product cycle. These requirements are noted and refined through investigative methods including: ethnographic study, contextual inquiry, prototype testing, usability testing and other methods. Generative methods may also be used including: card sorting, affinity diagraming and participatory design sessions. Cooperative design: involving designers and users on an equal footing. All these approaches follow the ISO standard Human-centred design for interactive systems (ISO 9241-210, 2010).

Participatory design Participatory design (originally Cooperative Design, also known in the USA as co-design) is an approach to design attempting to actively involve all stakeholders (e.g. employees, partners, customers, citizens, end users) in the design process to help ensure the result meets their needs and is usable. The term is used in a variety of fields e.g. software design, urban design, architecture, landscape architecture, product design, sustainability, graphic design, planning, and even medicine as a way of creating environments that are more responsive and appropriate to their inhabitants' and users' cultural, emotional, spiritual and practical needs. It is one approach to placemaking. In several Scandinavian countries, during the 1960s and 1970s, it was rooted in work with trade unions; its ancestry also includes action research and sociotechnical design.[1] Definition[edit] History[edit] History in Scandinavia[edit] Fields of participatory design[edit] Community planning and placemaking[edit]

Slow Movement The Slow Movement advocates a cultural shift toward slowing down life's pace. It began with Carlo Petrini's protest against the opening of a McDonald's restaurant in Piazza di Spagna, Rome in 1986 that sparked the creation of the Slow Food organization. Over time, this developed into a subculture in other areas, such as Cittaslow (Slow Cities), Slow living, Slow Travel, and Slow Design. Geir Berthelsen and his creation of The World Institute of Slowness[1] presented a vision in 1999 for an entire "Slow Planet" and a need to teach the world the way of Slow. "It is a cultural revolution against the notion that faster is always better. Professor Guttorm Fløistad summarizes the philosophy, stating: "The only thing for certain is that everything changes. The Slow Movement is not organized and controlled by a single organization. Cittaslow[edit] The goal of the Cittaslow movement is to resist the homogenization and globalization of towns and cities. Slow ageing[edit] Main article: Slow ageing

Toward a Complex Adaptive Intelligence Community [ Top of page ] What was that? How can we change ourselves in ways we cannot predict? More directly, how do we modify our nature to enable such unpredictable changes? Before giving the right answer, there is a wrong answer that can be dismissed up front— reorganization. Any reorganization by its nature is both predictable and slow. Figure 1 - Complex Adaptive Behavior The only way to meet the continuously unpredictable challenges ahead of us is to match them with continuously unpredictable changes of our own. To describe a community that “dynamically reinvents itself by continuously learning and adapting” in response to environmental changes harks to theoretical developments in the philosophy of science that matured in the 1990s collectively known as Complexity Theory. . . . . . . It is this expertise that engenders the trust required for independent action. There is a new generation of Internet tools that enable people to self-organize around shared knowledge. Figure 2 - Metcalfe's Law

7 Lessons From 7 Great Minds Have you ever wished you could go back in time and have a conversation with one of the greatest minds in history? Well, you can’t sorry, they’re dead. Unless of course you’re clairaudient, be my guest. But for the rest of us, we can still refer to the words they left behind. Even though these great teachers have passed on, their words still live, and in them their wisdom. 1. “If you don’t know where you are going, you’ll end up someplace else.” - Lawrence J. In order for us to achieve our dreams, we must have a vision of our goals. Action: Visualize a life of your wildest dreams. 2. “It was a high counsel that I once heard given to a young person, “Always do what you are afraid to do.” - Ralph Waldo Emerson The best way to learn something is to dive right in to it. Action: You must define your fears in order to conquer them. 3. “All that we are is the result of what we have thought. Our thoughts determine our reality. Action: Create a list of your intentions and desires. 4. 5. 6. 7.

Q Methodology: A Method for Modern Research Wicked Problems If you work in an organisation that deals with social, commercial or financial planning - or any type of public policy planning - then you've got wicked problems. You may not call them by this name, but you know what they are. They are those complex, ever changing societal and organisational planning problems that you haven't been able to treat with much success, because they won't keep still. They're messy, devious, and they fight back when you try to deal with them. Keywords: Wicked problems, general morphological analysis, policy analysis, Horst Rittel Introduction In 1973, Horst Rittel and Melvin Webber, both urban planners at the University of Berkley in California, wrote an article for Policy Sciences with the astounding title "Dilemmas in a General Theory of Planning". At first glance, it is not self-evident what is actually meant by this term. Also, wicked problems are not actually "problems" in the sense of having well defined and stable problem statements. 1. 2. 3. 4. 5. 6. 7.