Facts and information about London 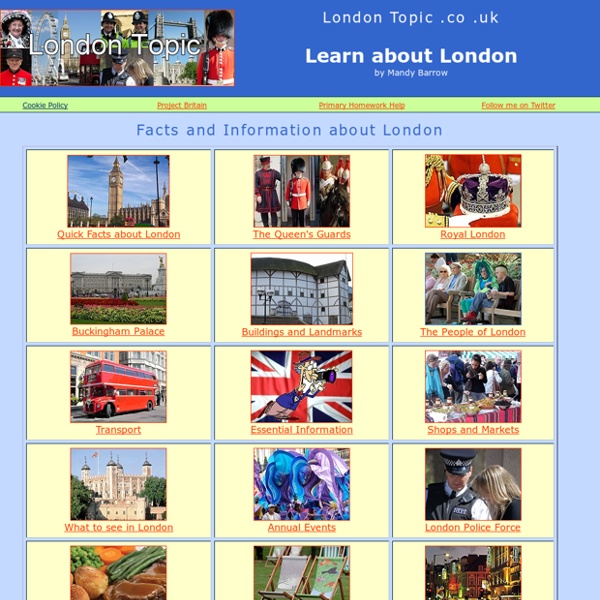 London If you live in London, are visiting England's capital, or are studying London, why not bring... This is Activity Village's collection of original London colouring pages. Take a tour around... Here's a brand new collection of printable word search puzzles, mazes and word scrambles for... Teenagers and UK culture Why bring UK culture to the teen classroom? We can introduce UK culture into the English classroom to help our students improve their English and at the same time learn about values and ways of doing things which may be different to theirs. Learning about life and culture in the UK can be very motivating as it brings the language alive for learners and creates a link between language and real life.

How to be a good tour guide How to be a good tour guide The art of being a tour guide A tour guide – who is it? - A tour guide – a person who guides groups or individual tourists to show them and interpret the cultural and natural heritage of the area they visit; a person who also posses knowledge of contemporary social and political life of a specific area. Listening: A Tour of London Tower Bridge, London (Copyright: Getty) When you visit a city for the first time, a good way to explore it is to go on an organised sightseeing tour. The tour will give you an overview of what there is to see and also provide you with some historical background. A popular way of seeing London is to go in one of the red double deck buses.

US State Department Creates Illustrations Depicting Differences Between British And American English People in America and the UK both speak English, and while most words remain the same there are a few differences that could potentially create a misunderstanding. To help English speakers from all over the world better communicate, the US State Department created these useful illustrations that highlight key differences between British and American English. English originated as early as the mid-5th century, and has since been brought to a number of countries. A trip to London-ESL/EFL Resources « Chestnut ESL/EFL 5 fun facts: What you don’t know about London (SOURCE: today.com) CLICK TO WATCH VIDEO Five facts you don’t know about London CLICK HERE FOR VIDEO & TRANSCRIPT (SOURCE: mythatsenglish.blogspot.gr) Top 10 London Attractions (INFORMATION & PICTURES) SOURCE:visitlondon.com WATCH the FOLLOWING VIDEO & ANSWER THE QUESTIONS-VISIT BLOG (SOURCE: englishteachermargarita.blogspot.com)

WebEnglish.se Related topics: Seasons, Months Warm-up Rapping Weatherman There are seven videos of the Rapping Weatherman. Dr Ciaran O'Keeffe: Six reasons why we should celebrate Halloween - Dr Ciaran O'Keeffe Reverend J John argues today that far from being a harmless celebration, Halloween celebrates evil and trivialises death and deformity. He says it subverts messages we would usually wish to promote - such as warning children not to take sweets from strangers - and glorifies everything that is evil and unpleasant. But I am here to step in and defend Halloween as something frivolously fun that deserved to be celebrated. Here's why... 1. The Origin of Halloween