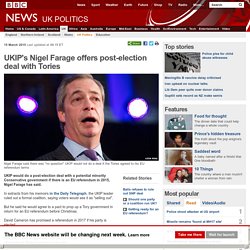 13/03/2015 International Business Times - Ukip leader Nigel Farage is desperate to create a green and unpleasant land. If we needed further proof of the deep unpleasantness of Ukip Nigel Farage served it up in bucketloads yesterday. 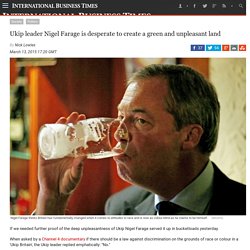 When asked by a Channel 4 documentary if there should be a law against discrimination on the grounds of race or colour in a 'Ukip Britain', the Ukip leader replied emphatically: "No. " Despite some attempts at backtracking, he has maintained he would axe many of our race discrimination laws. Nigel Farage says his discrimination law remarks were wilfully misinterpreted. Nigel Farage has moved to clarify his suggestion that he would abolish much of Britain’s anti-race-discrimination legislation, saying he was merely arguing employers should be allowed to prefer British workers over migrants for jobs. 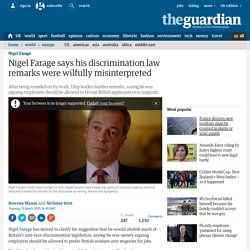 The Ukip leader said he had been “wilfully misinterpreted” after he gave an interview to Trevor Phillips, the former Equality and Human Rights Commission chief, in which he indicated the party would like to do away with much equality legislation. During the interview, Farage said: ‘I think the situation that we now have, where an employer is not allowed to choose between a British-born person and somebody from Poland, is a ludicrous state of affairs ...

I would argue that the law does need changing, and that if an employer wishes to choose – or you can use the word ‘discriminate’ if you want to – but wishes to choose to employ a British-born person, they should be allowed to do so.” Farage replied: “No. 28/02/2015 POLITICO Magazine - The Brit Who Crashed CPAC - Adam B. Lerner. When Dan Schneider, executive director of the American Conservative Union, heard Nigel Farage speak at a dinner last fall, he was entranced by the maverick British politician. 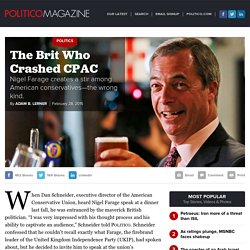 “I was very impressed with his thought process and his ability to captivate an audience,” Schneider told Politico. Schneider confessed that he couldn’t recall exactly what Farage, the firebrand leader of the United Kingdom Independence Party (UKIP), had spoken about, but he decided to invite him to speak at the union’s Conservative Political Action Conference anyway — the only foreign politician to do so this year. Schneider might have done well to look more deeply into Farage’s views, which didn’t sit too well with the CPAC audience —only the latest illustration that far-right politicians in different lands can travel far afield from each other, even when their parties are just across the pond.

“He sounds British,” Veuger said, and that adds an air of sophistication. As CPAC has since learned. Nigel Farage urges Ukip to take positive stance in immigration debate. Nigel Farage urged Ukip to start striking a positive tone about the immigration debate in his spring conference speech on Friday, just hours after some of his party spokesmen linked people coming to Britain to strains on food supply, water and even the sewage system. 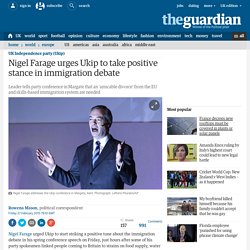 The Ukip leader did not have any new policy to unveil for the two-day event in Margate, Kent, as the party failed to get its manifesto ready in time. Instead, Farage used his speech to an audience of candidates and activists to make a plea for a hopeful message and against negative campaigning. “Everything about our campaign is going to be positive because we believe in Britain,” he said. Ukip wants an “amicable divorce” from the EU, wants to “re-embrace the Commonwealth” and “inject a positive note into the immigration debate” by promoting the benefit of a points-system based on skills, he said. “Schools are full, hospitals are troubled, healthcare – it is difficult to be seen in many areas of this country,” he said. Ukip does deal with far-right, racist Holocaust-denier to save EU funding.

Nigel Farage joins forces with far-right Swedish and French MEPs. 02/06/2014 Debating Europe — Should Beppe Grillo join forces with UKIP's Nigel Farage? The results of the 2014 European Parliament elections may be in, but it could be weeks before their full impact is understood. 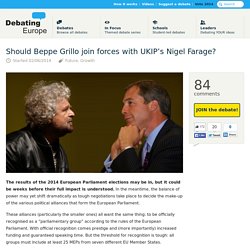 30/05/2014 Debating Europe — Does UKIP's election victory put Britain on course to leave the EU? For the first time in over a century, both Labour and the Conservatives failed to win a national election in the UK. 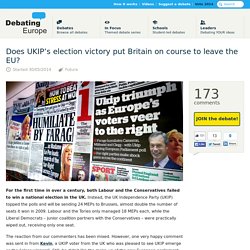 Instead, the UK Independence Party (UKIP) topped the polls and will be sending 24 MEPs to Brussels, almost double the number of seats it won in 2009. Labour and the Tories only managed 18 MEPs each, while the Liberal Democrats – junior coalition partners with the Conservatives – were practically wiped out, receiving only one seat. The reaction from our commenters has been mixed. However, one very happy comment was sent in from Kevin, a UKIP voter from the UK who was pleased to see UKIP emerge as the “clear winners“. Still, he didn’t like the make-up of the new European parliament, adding that “despite all the anti-EU feelings, we still have a very pro-EU parliament, and that’s disappointing“. It’s true that, despite stunning results for Eurosceptics in some countries – particularly France and the UK – two-thirds of voters nevertheless backed pro-European parties. 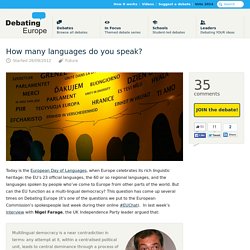 But can the EU function as a multi-lingual democracy? This question has come up several times on Debating Europe (it’s one of the questions we put to the European Commission’s spokespeople last week during their online #EUChat). In last week’s interview with Nigel Farage, the UK Independence Party leader argued that: Multilingual democracy is a near contradiction in terms: any attempt at it, within a centralised political unit, leads to central dominance through a process of ‘divide and rule’.

You can tell one nation one thing, and another nation something else, because there is no real communication between the media-circuses of the two, let alone adequate discussion between electorates. Interview 21/09/2012 Debating Europe — Britain in Europe #5: Could UKIP boycott an EU referendum? As part of our ongoing series of posts looking at the UK’s (increasingly precarious) place within the EU, we recently put some of your questions to Nigel Farage MEP, leader of the UK Independence Party (UKIP). 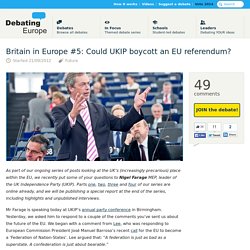 Parts one, two, three and four of our series are online already, and we will be publishing a special report at the end of the series, including highlights and unpublished interviews. Mr Farage is speaking today at UKIP’s annual party conference in Birmingham. Yesterday, we asked him to respond to a couple of the comments you’ve sent us about the future of the EU. We began with a comment from Lee, who was responding to European Commission President José Manuel Barroso’s recent call for the EU to become a ‘Federation of Nation-States’. Lee argued that: “A federation is just as bad as a superstate.