Britain and the EU

Timeline: history of the European Union. Robert Schuman, the French Foreign Minister, proposes that France, Germany and any other European country wishing to join pool coal and steel resources. 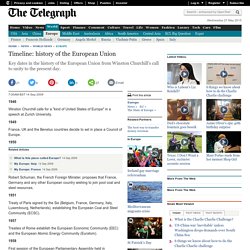 European Union website, the official EU website. Profile: European Union. The European Union, or EU, describes itself as a family of democratic European countries, committed to working together for peace and prosperity. 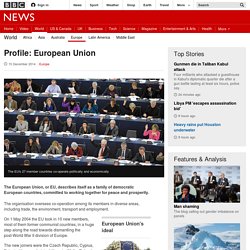 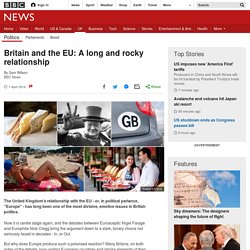 Now it is centre stage again, and the debates between Eurosceptic Nigel Farage and Europhile Nick Clegg bring the argument down to a stark, binary choice not seriously faced in decades - In, or Out. But why does Europe produce such a polarised reaction? Many Britons, on both sides of the debate, love visiting European countries and idolise elements of their culture - not least the food. Indeed, more than 1.5 million Britons have moved there to live.

But Europeans viewing British newspaper coverage, political debates or opinion polls would be forgiven for thinking we have little but contempt for our neighbours. The weight of history Image copyright Getty Images Maybe it is the long history of hostilities that clouds the British view of Europe with suspicion. BBC History: British history An insular mentality? Europe’s elections: The Eurosceptic Union. FOR once, Europe’s leaders seemed to agree: the European Union must change, and fast. 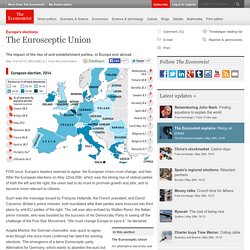 After the European elections on May 22nd-25th, which saw the strong rise of radical parties of both the left and the right, the union had to do more to promote growth and jobs, and to become more relevant to citizens. Such was the message issued by François Hollande, the French president, and David Cameron, Britain’s prime minister, both humiliated after their parties were trounced into third place by anti-EU parties of the right.

The call was also echoed by Matteo Renzi, the Italian prime minister, who was boosted by the success of his Democratic Party in seeing off the challenge of the Five Star Movement. “We must change Europe to save it,” he declared. Angela Merkel, the German chancellor, was quick to agree, even though she once more confirmed her talent for winning elections. What will Europe’s leaders do to quell voters’ ugly mood? The global repercussions may be more worrying. Thatcher and her tussles with Europe. Margaret Thatcher's tussles over Europe and the UK's role in what is now the European Union were among the defining moments of her premiership. 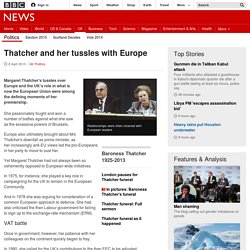 She passionately fought and won a number of battles against what she saw as the excessive powers of Brussels. Europe also ultimately brought about Mrs Thatcher's downfall as prime minister, as her increasingly anti-EU views led the pro-Europeans in her party to move to oust her. Yet Margaret Thatcher had not always been so vehemently opposed to European-wide initiatives. UK Independence Party - UKIP. Eurosceptic Conservative MPs demand major concessions when David Cameron renegotiates Britain's EU membership - General Election 2015 - UK Politics - The Independent. The Europhobes admit the Prime Minister’s unexpected triumph has strengthened his position in the party, and insist there will be no repeat of the rebellions over Europe which destabilised John Major’s government in the 1990s. 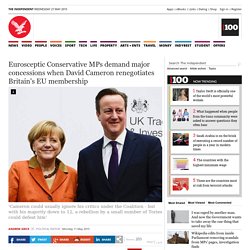 However, they are already raising the bar high on a new EU deal and warning that they will campaign to leave the 28-nation bloc in the 2017 referendum if he secures only cosmetic changes. One Eurosceptic MP said: “He has won a breathing space and he must be allowed to get on with it [the EU talks]. But we have also won new muscle because he will need our votes in the Commons.” Mr Cameron could usually ignore his hardline critics under the Coalition because the Liberal Democrats gave him an overall majority of more than 70.

But with his majority down to 12, a rebellion by a small number of Tories could defeat him. David Davis, a Eurosceptic who was a Government whip during the Major era, believed there would not be a repeat of the revolts in the 1990s. 1 of 8. Brexit – what would happen if Britain left the EU? David Cameron’s electoral triumph has brought the prospect of a British withdrawal from the EU one step closer. 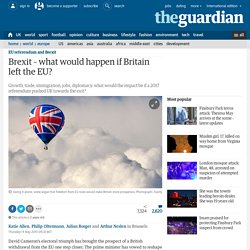 The prime minister has vowed to reshape Britain’s ties with Europe before putting EU membership to a vote by 2017. But what would “Brexit” - a British exit from the 28-nation EU - look like? Eurosceptics argue that withdrawal would reverse immigration, save the taxpayer billions and free Britain from an economic burden. Europhiles counter that it would lead to deep economic uncertainty and cost thousands, possibly even millions, of jobs. Our writers have drawn on the best available expertise to assess what Brexit would mean for growth, jobs, trade, immigration and Britain’s position in the world.

Starting with the estimates that leaving would be a net loss to the UK economy, one analysis often cited is from researchers at the National Institute of Economic and Social Research in 2004.