Loescher English Corner 1 - 7 London sightseeing _with subtitles. Myenglishproject - THE UNITED KINGDOM. A Virtual trip to London Web Quest. Let's talk about the UK (still with Scotland) At the beginning of the new school year teachers usually explain to their students what they are going to study.

Sometimes efl teachers not only teach grammar but also British culture, so one of the first cultural topics they discuss with their students are the geography of the UK and its form of government. Here you can find an interactive mindmap, a digital poster and a collection of useful websites, just to simplify the work. Click on the Glogster digital poster below, you will find general information about the United Kingdom and some videos. Now take a look at my Cacoo mindmap below about the UK form of government. I have edited it with Thinglink to make it interactive. You can also click on the following link to enlarge the above image: Last September, 18th Scottish people voted for Scotland independence. Scottish referendum explained for non-Brits If you want more general information about the Uk government, the Queen and the Royal Family, open my Blendspace lesson.

Learning English. LONDON. Language In Use. It is great to show and offer students many examples of English language in use. 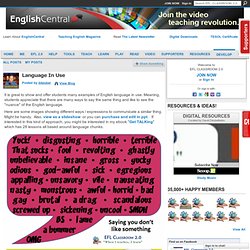 Meaning, students appreciate that there are many ways to say the same thing and like to see the "nuance" of the English language. Here are some images showing different ways / expressions to communicate a similar thing. Might be handy. Also, view as a slideshow or you can purchase and edit in ppt. If interested in this kind of approach, you might be interested in my ebook "Get TALKing" which has 28 lessons all based around language chunks. Learn about Europe: England. Slidestory Home. Facts and information about London. Listening: A Tour of London. Tower Bridge, London (Copyright: Getty) When you visit a city for the first time, a good way to explore it is to go on an organised sightseeing tour. 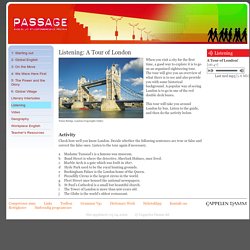 The tour will give you an overview of what there is to see and also provide you with some historical background. A popular way of seeing London is to go in one of the red double deck buses. This tour will take you around London by bus. Listen to the guide, and then do the activity below. Activity Check how well you know London. A Madame Tussaud’s is a famous wax museum. b Bond Street is where the detective, Sherlock Holmes, once lived. c Marble Arch is a gate which was built in 1827. d Hyde Park used to be the royal hunting grounds. 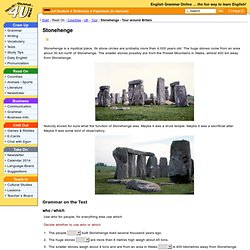 Its stone circles are probably more than 4,000 years old. The huge stones come from an area about 30 km north of Stonehenge. The smaller stones possibly are from the Preseli Mountains in Wales, almost 400 km away from Stonehenge. Nobody knows for sure what the function of Stonehenge was. Search - Mary Glasgow Magazines. Strip The City - London. The Tower of London: an introduction. This is London. Top 10 London Attractions. Visiting London. Voyage to the English speaking world. Window on Britain An introduction to Britain. Welcome to London – Tour around Covent Garden.

WELCOME TO LONDON. City's 'smallest' coffee shop opens in phone box - BBC News. A coffee shop said to be the smallest in Birmingham has opened in a red telephone box. 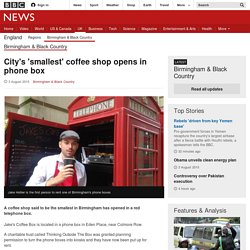 Jake's Coffee Box is located in a phone box in Eden Place, near Colmore Row. A charitable trust called Thinking Outside The Box was granted planning permission to turn the phone boxes into kiosks and they have now been put up for rent. Jake's Coffee Box, which is run by Jake Hollier, is the first person to rent one of the Birmingham phone boxes. Mr Hollier, 23, who has been a healthcare assistant at City Hospital, said the project had been "six months in the making". He said: "I wanted to bring something different to the city. "I've got a coffee machine and some sausage rolls. He said he had about 20 customers in his first two hours. Asked about his first day, he said: "Everyone seems to look really oddly at me. " Thinking Outside The Box has already overseen a similar scheme at Brighton's Pavilion Gardens, where two phone boxes have become units selling coffee and ice cream. Visitlondon.com blog. 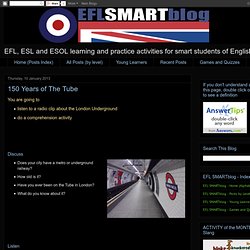 How old is it? Have you ever been on the Tube in London? What do you know about it? Listen What was London like 150 years ago? Listen again and do the quiz below Alternative vocabulary gap fill exercise here Printable worksheets here Read Interesting Facts about the Tube Each year, every Tube train travels 114,500miles/184,269km.The average speed of a train is 33km/20.5 miles per hour.Only 45 per cent of the network is actually in tunnels.There are 426 escalators.