THE BATTLE OF BRITAIN 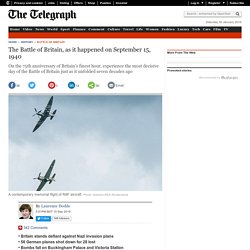 Daylight raids were abandoned in favour of what we now call the Blitz. The aim was still to break our spirit, but that was now harder than ever. Britain had won its first real victory of the war, and its value to public morale was incalulable. Sources I am deeply indebted to the following works, upon which I have relied for this account — • Alfred Price — "Battle of Britain Day" and "The Hardest Day" • Stephen Bungay — "The Most Dangerous Enemy" • Tom Neil — "Gun Button to Fire" • Richard Townshend Bickers — "The Battle of Britain" • Winston Churchill — "Their Finest Hour" — and also to the following for their help. • John Pulfer of the Battle of Britain Historical Society • The Imperial War Museum • Richard Burgess of the Telegraph graphics team Please pursue their works if you want to read more.

Beazley (centre, in flying jacket) with members of No 249 Squadron Whatever happened to lucky Ray Holmes? Hmm. Photo: TMG It was. 8 Things You Need To Know About The Battle Of Britain. Contrails left by British and German aircraft after a dogfight during the Battle of Britain, September 1940. 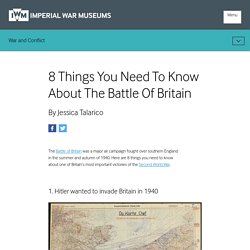 The Battle of Britain took place between July and October 1940. The Germans began by attacking coastal targets and British shipping operating in the English Channel. They launched their main offensive on 13 August. Attacks moved inland, concentrating on airfields and communications centres. Fighter Command offered stiff resistance, despite coming under enormous pressure. Battle of Britain. The Battle of Britain was a struggle between the German Luftwaffe (commanded by Hermaan Göring) and the British Royal Air force (headed by Sir Hugh Dowding’s Fighter Command) which raged over Britain between July and October 1940. 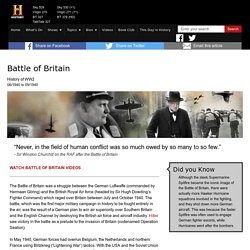 The battle, which was the first major military campaign in history to be fought entirely in the air, was the result of a German plan to win air superiority over Southern Britain and the English Channel by destroying the British air force and aircraft industry. Hitler saw victory in the battle as a prelude to the invasion of Britain (codenamed Operation Sealion). In May 1940, German forces had overrun Belgium, the Netherlands and northern France using Blitzkrieg (‘Lightening War’) tactics. With the USA and the Soviet Union both still mired in hesitant isolationism, and the French ally toppled, Britain now stood alone against Nazi Germany. The climax of the battle came on 15 September, a day in which the Luftwaffe lost 56 planes and the RAF 28. Battle of Britain. BBC iWonder - What was the secret to winning the Battle of Britain? RAF Museum. Situated on the historic site of Hendon's London Aerodrome in Colindale, our North London Museum, is one of two sites belonging to the U.K's only national museum that tells the story of the Royal Air Force through its people and collections. 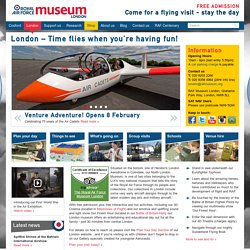 Our collections in London include some very early aircraft designs through to the latest modern day jets and military aircraft. With free admission plus free interactive and fun activities, including our 3D Cinema (located in Milestones of Flight) and our emotive and uplifting sound and light show Our Finest Hour (located in our Battle of Britain Hall), our London museum offers an entertaining and educational day out for all the family - just 30 minutes from central London.

For details on how to reach us please visit the Plan Your Day Section of our London website…and if you’re visiting us with children don’t forget to drop in on our Gallery specially created for youngster Aeronauts.