The truth about David Cameron's fracking fairytale. Davos tends to turn the hardest of heads. 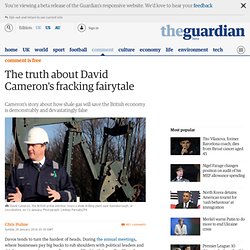 During the annual meetings, where businesses pay big bucks to rub shoulders with political leaders and thinkers, a contagious aura of smugness fills this Alpine valley like a fog, killing much sense of reality. Politicians need a quick corridor story to sell their country's virtues, and David Cameron has landed on a peculiarly ill-informed one. Most narratives are falsifiable only with the passage of time, but Cameron's story is demonstrably a fairytale right now. The Cameron song is that Britain is going to be "re-shoring" businesses – the opposite of offshoring – in part because of cheap gas as fracking takes off: prices will fall as they have in the US, where they are just a third of Europe's prices.

British consumers, whose bills will be halved, will doff their caps to Tory ministers who made possible this revolution of cheap energy. This is not a vision but a fantasy. Assume, however, that our shale deposits are frackable. Drilling through the spin – UK shale gas exploration. Shale gas pad drilling. 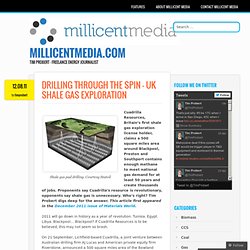 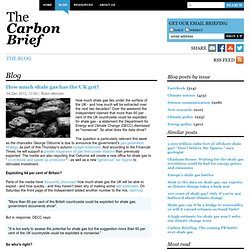 Fracking series part 1: The economic impact. Got some questions about fracking? 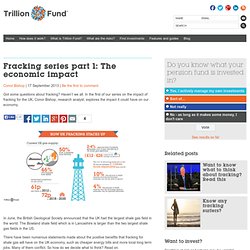 Haven’t we all. The Myths and Realities of Shale Gas Exploration - Speeches. Introduction It’s an honour to be here at the Royal Society today. 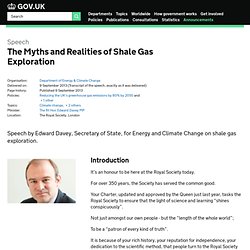 For over 350 years, the Society has served the common good. Your Charter, updated and approved by the Queen just last year, tasks the Royal Society to ensure that the light of science and learning “shines conspicuously”. Not just amongst our own people - but the “length of the whole world”; To be a “patron of every kind of truth”. It is because of your rich history, your reputation for independence, your dedication to the scientific method, that people turn to the Royal Society for understanding when confronted with new and complex challenges.

That is why last year, the Government’s former Chief Scientific Adviser, Sir John Beddington, asked the Royal Society and the Royal Academy of Engineering, to review the scientific and engineering evidence on the advances being made in shale gas extraction. UK Fracking Map : Fracking is a dirty word : Climate Change. Fracking companies entitled to licences on more than 60% of British land. Two-thirds of the UK's land will be available for fracking companies to license, a government map published on Tuesday shows, with new areas opened up in the Midlands, Cumbria and Wales. Ministers said major energy companies had expressed interest in new shale gas licences and up to 150 applications are expected, which could cover about 15% of the UK. Fracking confusion: How UK has been 'fracked' for decades. 21 August 2013Last updated at 19:46 ET By Caroline Lowbridge BBC News, East Midlands Campaigners protested in Parliament Square, London, in December Protests by environmental campaigners have increased awareness of hydraulic fracturing, or "fracking", but the process has been used in the UK's oil and gas industries for decades. 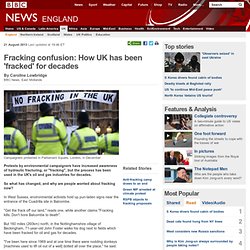 So what has changed, and why are people worried about fracking now? In West Sussex, environmental activists hold up pun-laden signs near the entrance of the Cuadrilla site in Balcombe. "Get the frack off our land," reads one, while another claims "Fracking kills: Don't bore Balcombe to death". But 160 miles (260km) north, in the Nottinghamshire village of Beckingham, 71-year-old John Foster walks his dog next to fields which have been fracked for oil and gas for decades. 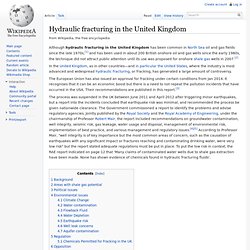 The European Union has also issued an approval for fracking under certain conditions from Jan 2014. It recognises that it can be an economic boost but there is a need to not repeat the pollution incidents that have occurred in the USA. Their recommendations are published in this report.[3] List Of Businesses involved in UK Fracking. Shale-gas-exploitation. Contributed by Marianne Stuart, Team Leader Groundwater Protection with the British Geological Survey Outcrop of main black shale formations in UK and selected oil and gas wells and gasfields. © BGS, NERC (2012) 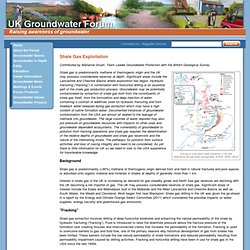 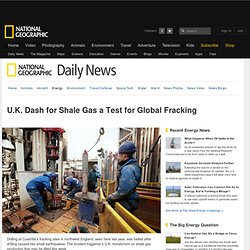 Grose in London The starting gun has sounded for the United Kingdom's "dash for gas," as the media here have dubbed it. A moratorium on shale gas production was lifted Thursday. And plans to streamline and speed the regulatory process through a new Office for Unconventional Gas and Oil were unveiled last week in the annual autumn budget statement by the chancellor of the exchequer, George Osborne.

In the U.K., where all underground mineral rights concerning fossil fuels belong to the crown, hydraulic fracturing, or fracking, could unlock a new stream of government revenue as well as fuel. A taste of the fight ahead in the U.K. came ahead of Osborne's speech last weekend, when several hundred protesters gathered outside of Parliament with a mock 23-foot (7-meter) drilling rig. Fracking: The great debate - UK Politics - UK. Will fracking lead to cheaper gas prices? 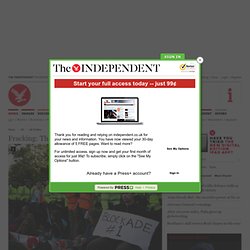 David Cameron: Fracking has the real potential to drive prices down … gas and electric bills can go down when our home-grown energy supply goes up. Caroline Lucas: Prices are set to keep rising. Tom Bawden: The Prime Minister’s claim looks disingenuous at best. Even an executive of Cuadrilla, Britain’s most prominent fracking company, was caught on tape admitting that a domestic shale gas revolution would be extremely unlikely to reduce prices, and if it did, it would only be by a “very small” percentage. Fracking the nation: the dash for gas beneath rural Britain. Compton Martin is not the most obvious place to have a conversation about drilling for gas, and what's already happening in US states such as Texas, Oklahoma and Ohio.

It sits on the northern edge of the Mendip Hills, in the famously picturesque Chew Valley. It may say something about the place that it still has a functioning village water pump. At a bus stop, I meet two local mums: Chloe Mann, 35, and Sarah Kirwan, 39. "It's quiet little village," says Mann, a mother of two who works part-time at a law firm.

Raeng Shale_Gas review. Onshore_UK_oil_and_gas_exploration_England_Dec13_contents. Bgs shale gas. What is shale gas, what is the likely UK resource and where is it? With Professor Mike Stephenson. UK fracking safe but US operations marred by ‘poor practices’ Hydraulic fracturing — or ‘fracking’, as it is popularly known — presents a “very low risk” of contaminating drinking water or triggering forceful earthquakes in the United Kingdom, and can safely be performed as long as companies engage in different practices from those that have produced concern in the United States. Fracking attracts protests around the world. ProgressOhio via Flickr. Extreme Energy Action Network.