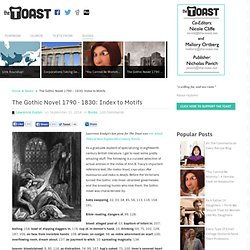 As a graduate student of specializing in eighteenth century British literature, I get to read some pretty amazing stuff. The following is a curated selection of actual entries in the index of Ann B. Tracy’s important reference text, The Gothic Novel, 1790-1830: Plot Summaries and Index to Motifs. Every English Novel Ever. 1. 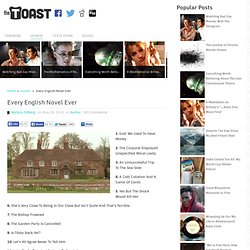 God, We Used To Have Money 2. The Corporal Displayed Unspecified Moral Laxity 3. An Unsuccessful Trip To The Sea-Side 4. 5. 6. 7. 8. Heath Robinson: How to Be a Motorist, Robinson, Browne. Heath Robinson (1872–1944) is Britain’s “Gadget King”—master of the art of creating madcap contraptions that made use of ropes, weights, and pulleys to perform relatively simple tasks, from wart removal to peeling potatoes. 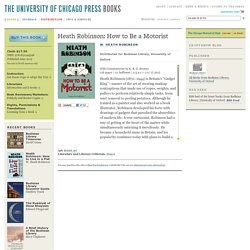 Although he trained as a painter and also worked as a book illustrator, Robinson developed his forte with drawings of gadgets that parodied the absurdities of modern life. A true cartoonist, Robinson had a way of getting at the heart of the matter while simultaneously satirizing it mercilessly. He became a household name in Britain, and his popularity continues today with plans to build a museum in London to share with a new generation the story of his life and work. 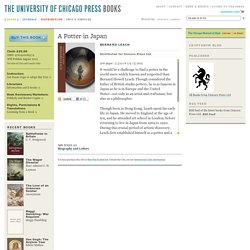 Though considered the father of British studio pottery, he is as famous in Japan as he is in Europe and the United States—not only as an artist and craftsman, but also as a philosopher. Though born in Hong Kong, Leach spent his early life in Japan. He moved to England at the age of ten, and he attended art school in London, before returning to live in Japan from 1909 to 1920. These accounts provide a unique opportunity to see the important Eastern influence on his craft and will appeal to lovers of ceramics and anyone with an interest in cultural interchange between East and West. The Reformation of Emotions in the Age of Shakespeare, Mullaney. James A. Secord, "Visions of Science: Books and Readers at the Dawn of the Victorian Age" (U of Chicago Press, 2014) Ellen Boucher, "Empire's Children" (Cambridge UP, 2014)

Ellen Boucher View on Amazon For almost 100 years, it seemed like a good, even wholesome and optimistic idea to take young, working-class and poor British children and resettle them, quite on their own and apart from their families, in Canada, Australia, and southern Rhodesia. 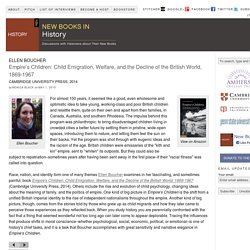 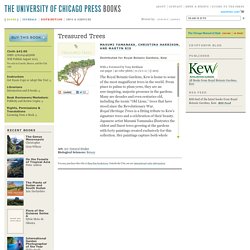 What to give the English king who has everything? Today's post is by one of our readers, Dr. 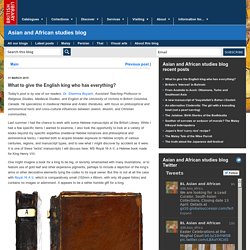 Shamma Boyarin, Assistant Teaching Professor in Religious Studies, Medieval Studies, and English at the University of Victoria in British Columbia, Canada. He specializes in medieval Hebrew and Arabic literatures, with focus on philosophical and astronomical texts and cross-cultural influences between Jewish, Muslim, and Christian communities. Last summer I had the chance to work with some Hebrew manuscripts at the British Library. While I had a few specific items I wanted to examine, I also took the opportunity to look at a variety of books beyond my specific expertise (medieval Hebrew romances and philosophical and astronomical texts). I wanted both to acquire broader exposure to Hebrew scripts of various centuries, regions, and manuscript types, and to see what I might discover by accident as it were. Spine and eighteenth century binding with British Museum stamp (Museum Britannicum) of MS Royal 16 A II Dedication to Henry VIII (f. 1v)

How to Play ‘Wolf Hall’ by Hilary Mantel. The following “notes on characters” are drawn from Hilary Mantel’s suggestions to actors in Wolf Hall and Bring Up the Bodies: The Stage Adaptation, by Mike Poulton, published by Picador. 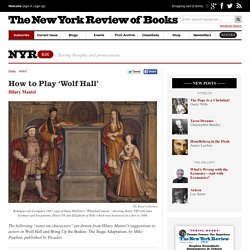 Cardinal Archbishop Thomas Wolsey You are, arguably, Europe’s greatest statesman and greatest fraud. You are also a kind man, tolerant and patient in an age when these qualities are not necessarily thought virtues. You are not quite the enormous scarlet cardinal of the (posthumous) portrait. You are more splendid than stout, a man of iron constitution who has survived the “sweating sickness” six times. When Henry VIII came to the throne you were ready to take much of the burden off the young back, and the Prince was glad to let you carry it.

When Henry first asks for an annulment of his marriage, you are confident that you will be able to secure it. How the Tudors invented breakfast. Few of us in the 21st century would dream of embarking upon our days on an empty stomach, but in historical terms, breakfast is hardly noticeable. 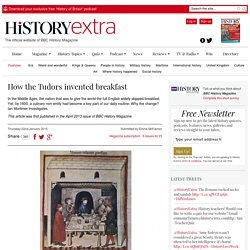 Whole books have been written about feasts and banquets, dinners and suppers. Even teatime has its place on the shelves of our social history. But breakfast? Cornflakes, muesli, bacon and eggs, continental or full English – they are almost all ignored. And they are all features of the modern breakfast, which is far more often studied than breakfasts before 1600.

The reason is not hard to find. Try It! Buy It!: Vintage Adverts, British Library. The Hidden Perspective: The Military Conversations 1906-1914, Owen. The Christmas Match: Football in No Man’s Land 1914, Thermaenius. Two Footballers The road to a field in Flanders Albert and Jimmy The boys from Schedewitz A vanman in Edinburgh Forwards into the War The Players who earned a medal From Africa to Glasgow A short march to the train First over the Channel Marching on Real War Graves at the roadside The first day of the war A half battalion Towards Paris “Rats in a trap” In the Trenches A retreat they could not understand Turning around Barbed wire “Rather a forlorn hope” Quiet, but still dangerous Back into the trenches Christmas Truce A quiet Christmas Delicious silence The Match Nobody’s home ground And the War Went on A new truce in the mud Two destinies in the Great War What If… There was more to the truce than souvenirs and football 100 Years Later Lest we forget Acknowledgements Thanks Sources and biographies. 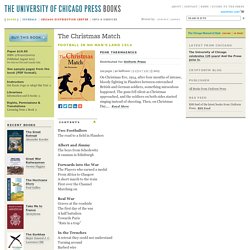 503 Service Temporarily Unavailable. Operation War Diary. The Huns Have Got my Gramophone!: Advertisements from the Great War, Doran, McCarthy. Food for Thought: Keeping Well in Wartime, Imperial War Museums. Wise Eating in Wartime 1. A Little of What You Fancy 2. That Sunday Joint 3. Offal Good Value for Money 4. Fat Fish and Lean Fish 5. The World's Best Food 6. How to Keep Well in Wartime Foreword by the Minister of Health 1. Britain’s ‘Interest’ in Bahrain. In 1783, the Al Khalifa family – originally from the Nejd region of what is now Saudi Arabia – captured the islands of Bahrain from Shaikh Nasr Al Madhkur, who had ruled them on behalf of the Qajar dynasty of Persia. Exhibitions & Learning online. Black Knights, Green Knights, Knights of Color All A-Round: Race and the Round Table. The three-posts-a-week thing is not my best plan so far, but we will hit twelve posts this fine month of October.

It will happen. However, not all of them are going to be clever sciencey posts. This one is a rewrite of a piece I did on another one of my odd little blogs. Since it seems like some sad internet people are mad that a man of color is going to play a role in a modern adaptation of the King Arthur mythos, I thought I would drop some classical-education truthbombs about the 5-ish Known Men Of Color in King Arthur.

Black London: Life before Emancipation. Other books by the author Carrington: A Life Life before Emancipation Gretchen Gerzina Dartmouth College Library Hanover Dartmouth College Library © 1995 Gretchen Holbrook Gerzina All rights reserved. Someone asked me a while ago for resources on Black Victoriana. Britain's black power movement is at risk of being forgotten, say historians. What 'Black Lives' Means in Britain.