What's on in your area in 2017. CrossCountry Trains - seven offbeat UK adventures. Why there's nothing better than strolling through Tobermory. By Clive Aslet Published: 00:39 GMT, 13 August 2015 | Updated: 08:15 GMT, 13 August 2015 All this week, in a series of superb pullouts for you to collect, the Mail is revealing 100 Glories of Secret Britain: the wonderful sights across the country that too few of us know about or visit. 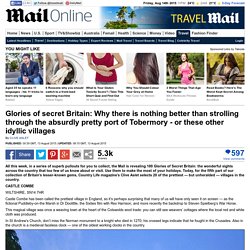 Use them to make the most of your holidays. Today, for the fifth part of our collection of Britain’s lesser-known gems, Country Life magazine’s Clive Aslet selects 20 of the prettiest — but unheralded — villages in the country. Castle Combe has been called the prettiest village in England, so it’s perhaps surprising that many of us will have only seen it on screen — as the fictional Puddleby-on-the Marsh in Dr Doolittle, the Sixties film with Rex Harrison, and more recently the backdrop to Steven Spielberg’s War Horse. This magical village was once a weaving town at the heart of the Cotswolds wool trade: you can still see weavers’ cottages where the local red and white cloth was produced. Britain's unspoilt seaside gems you MUST visit before summer ends  This week the Mail is revealing 100 Glories of Secret Britain so you can enjoy your summer by visiting hidden gemsToday we give you 20 stunning coastal spots too few of us know about - from Botany Bay in Kent to the Isle of Skye By Jenny Coad for the Daily Mail Published: 23:25 GMT, 9 August 2015 | Updated: 09:52 GMT, 11 August 2015 All this week, the Mail is revealing 100 Glories of Secret Britain: the wonderful sights across the country too few of us know about or visit. 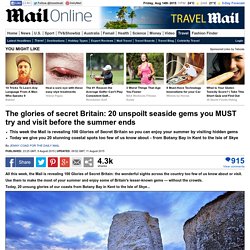 Use them to make the most of your summer and enjoy some of Britain's lesser-known gems — without the crowds. 20 stunning wonders of nature from around Britain that you simply MUST visit  Mail reveals Britain's top 20 natural wonders as part of our special seriesThey include Loch Awe in Scotland and Henrhyd Falls in Powys, Wales Our guide helps you make the most of your summer holiday in the UK By Jo Tweedy For Mailonline Published: 23:56 GMT, 11 August 2015 | Updated: 18:48 GMT, 12 August 2015. 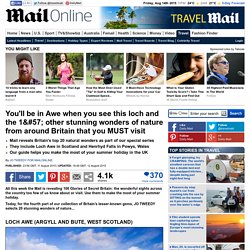 Fabulous historic houses too few of us know about that you simply MUST visit. By Harry Mount for Daily Mail Published: 23:01 GMT, 10 August 2015 | Updated: 17:22 GMT, 11 August 2015 All this week, in a series of superb pullouts for you to collect, the Mail is revealing 100 Glories of Secret Britain: the wonderful sights across the country too few of us know about or visit. 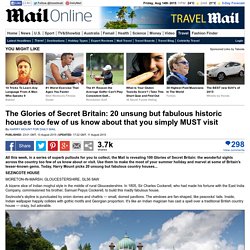 Use them to make the most of your summer holiday and marvel at some of Britain's lesser-known gems. Today, Harry Mount picks 20 unsung but fabulous country houses... A bizarre slice of Indian moghul style in the middle of rural Gloucestershire. Sezincote's skyline is punctuated by onion domes and chattris — small, domed pavilions. In 1805, Sir Charles Cockerell, who had made his fortune with the East India Company, commissioned his brother, Samuel Pepys Cockerell, to build this madly fabulous house OPENING TIMES AND TICKETS: Thursdays, Fridays and Bank Holiday Mondays from May to September; 2.30pm to 5.30pm.

Geograph British Isles - photograph every grid square! Gardens To Visit in England, Scotland & Wales - Great British Gardens. Glories of secret Britain: 20 enchanting gardens you MUST visit this season. Why not spend your summer exploring some of Britain's hidden gems? 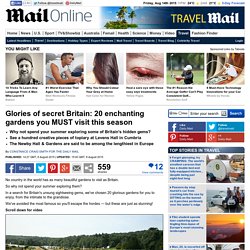 See a hundred creative pieces of topiary at Levens Hall in CumbriaThe Newby Hall & Gardens are said to be among the lengthiest in Europe By Constance Craig Smith For The Daily Mail. Britain's Finest Luxury Hotels, B&Bs, accommodation and attractions.

Scotland. Wales. Ireland. London. South East of England. East of England. South West of England. Midlands of England. Yorkshire. North East. North West. The great myth of urban Britain. 28 June 2012Last updated at 05:56 ET The UK by night, seen from the International Space Station - the bright patches are city lights What proportion of Britain do you reckon is built on? 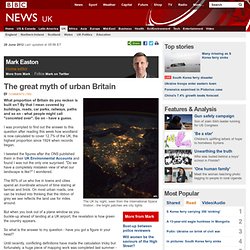 By that I mean covered by buildings, roads, car parks, railways, paths and so on - what people might call "concreted over". Go on - have a guess. I was prompted to find out the answer to this question after reading this week how woodland is now calculated to cover 12.7% of the UK, the highest proportion since 1924 when records began. I tweeted the figures after the ONS published them in their UK Environmental Accounts and found I was not the only one surprised. The 80% of us who live in towns and cities spend an inordinate amount of time staring at tarmac and brick. But when you look out of a plane window as you buckle-up ahead of landing at a UK airport, the revelation is how green the country appears.

So what is the answer to my question - have you got a figure in your head? Their conclusion? Yes. An oasis in a desert of A-roads: Lorry driver documents his life on the highways and byways of the UK... with pictures of snack vans. By Amanda Williams Published: 13:35 GMT, 18 August 2013 | Updated: 14:37 GMT, 18 August 2013 They are a familiar sight to most long haul drivers - an oasis of tea, bacon sandwiches and a friendly ear to tired motorists. 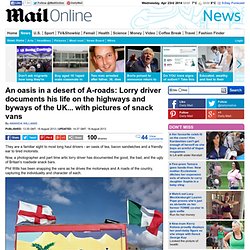 Now, a photographer and part time artic lorry driver has documented the good, the bad, and the ugly of Britain's roadside snack bars. Phil Wills has been snapping the vans as he drives the motorways and A roads of the country, capturing the individuality and character of each. 'Franco's Oasis' snack van, A46, Worcestershire - just one of the many roadside snack vans photographer Phil Wills' has documented along his travels 'Avonmouth Quick Snacks' snack van, A403 road, Bristol. 'Mark's Munchies' snack van, A30 road, Cornwall. 'Gary's' snack van, A5036 road, Liverpool. Picturing each from the front, and treating them with the same reverence as is usually reserved for high end restaurants, Mr Wills documents the name (where available) and location of each.