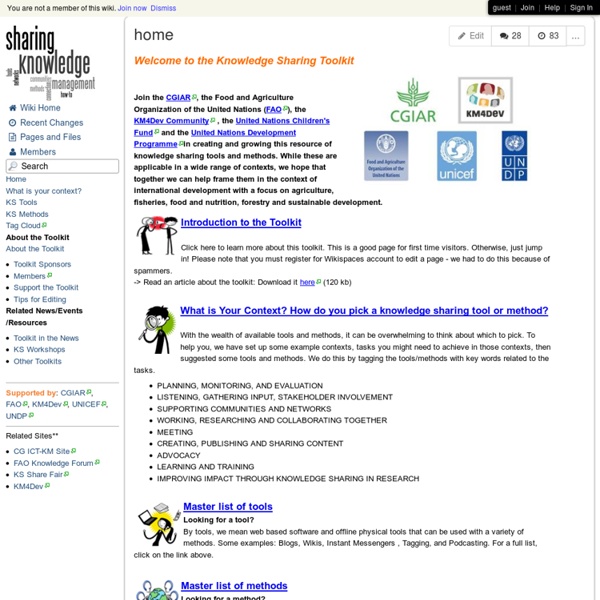 Welcome to the Knowledge Sharing ToolkitJoin theCGIAR, the Food and Agriculture Organization of the United Nations (FAO), the KM4Dev Community , the United Nations Children's Fund and the United Nations Development Programmein creating and growing this resource of knowledge sharing tools and methods. While these are applicable in a wide range of contexts, we hope that together we can help frame them in the context of international development with a focus on agriculture, fisheries, food and nutrition,forestry and sustainable development. Click here to learn more about this toolkit. This is a good page for first time visitors. Otherwise, just jump in! Please note that you must register for Wikispaces account to edit a page - we had to do this because of spammers. -> Read an article about the toolkit: Download it here (120 kb)

Awesome Chart Comparing Traditional Versus 21st Century Learning February 4, 2015 In his classic book “Education and Experience” John Dewey talks about the dichotomy between traditional and progressive forms of education saying that such a dichotomy polarizes discussions around educational matters. Dewey, instead, argued for an experience-based model that builds on the drawbacks and strengths of both models to form a holistic conceptualization of what a student-centred education should be like. Today, as I stumbled upon this beautiful chart on Mindhsift’s Facebook page I could not help but connect it to Dewey’s discussion of experiential and progressive learning. What in the chart is labelled 21st century learner is in fact the kind of learner Dewey theorized in his work more than half a century ago.

Alternatives to SharePoint – Are there really any good ones if standardization and integration is a high priority for you and you have broad needs? Man, the negative articles from the media about SharePoint just seem to keep coming. Here are some recent articles that I have read in the news:I think all of this stuff is a load of crap! It is designed to get people to read stuff and pay for it by looking at and clicking on advertisements, or pay for it with cash in the case of Gartner’s report. Folks, the install base of SharePoint on-premises is HUGE! 3 More Basic Tools For Group Conversations For those who have experience in group process, this post may seem pretty basic. Nevertheless I am including it in this series on dealing with conflict because some readers may not have that much experience leading group process. Even those who do may find something useful in this summary of 3 more basic tools for group conversation. In this post, I draw again on some resources described in Cool Tools for Hot Topics by Ron Kraybill and Evelyn Wright.

A model for knowledge management strategy There are known knowns. These are things we know that we know. There are known unknowns. That is to say, there are things that we know we don’t know. But there are also unknown unknowns. There are things we don’t know we don’t know. Isaac Asimov on the Thrill of Lifelong Learning, Science vs. Religion, and the Role of Science Fiction in Advancing Society by Maria Popova “It’s insulting to imply that only a system of rewards and punishments can keep you a decent human being.” Isaac Asimov was an extraordinary mind and spirit — the author of more than 400 science and science fiction books and a tireless advocate of space exploration, he also took great joy in the humanities (and once annotated Lord Byron’s epic poem “Don Juan”), championed humanism over religion, and celebrated the human spirit itself (he even wrote young Carl Sagan fan mail).

Turning to One Another: Simple Conversations to Restore Hope to the Future Conversation is innate to humans. You can rely on this as you invite people to join a conversation. Talking and listening to one another is something we remember; it’s what humans have done for thousands of years, so it’s deep in our species' memory. These days, because of the bad habits we’ve developed and the frantic pace of our lives, we may need to be reminded about slowing down, not interrupting, listening to each other and not instantly responding.

SDC KM Tools <div class='noindex'>You may be trying to access this site from a secured browser on the server. Please enable scripts and reload this page.</div> Turn on more accessible mode How the Flipped Classroom Is Radically Transforming Learning Editor's Note:Posts about the flipped class on The Daily Riff beginning in January 2011 have generated over 240,000 views to-date - thanks contributors and readers . . . See our other links related to the flipped class below this guest post. Since this post was written, Bergmann and Sams have released their book, Flip your Classroom: Reach Every Student in Every Class Every Day. Do check it out. - C.J.