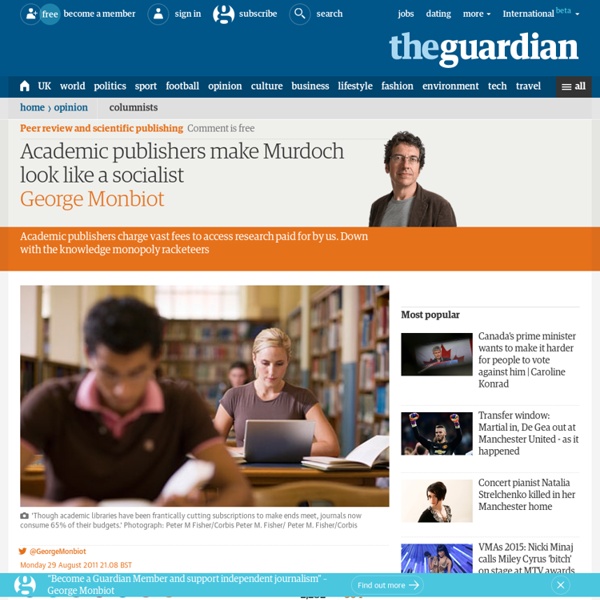 Who are the most ruthless capitalists in the western world? Whose monopolistic practices make Walmart look like a corner shop and Rupert Murdoch a socialist? You won't guess the answer in a month of Sundays. While there are plenty of candidates, my vote goes not to the banks, the oil companies or the health insurers, but – wait for it – to academic publishers. Everyone claims to agree that people should be encouraged to understand science and other academic research. You might resent Murdoch's paywall policy, in which he charges £1 for 24 hours of access to the Times and Sunday Times. Of course, you could go into the library (if it still exists). Murdoch pays his journalists and editors, and his companies generate much of the content they use. The returns are astronomical: in the past financial year, for example, Elsevier's operating profit margin was 36% (£724m on revenues of £2bn). More importantly, universities are locked into buying their products.

World's Dumbest Editor Incurs The Wrath Of The Internet Rejoice, webizens, for today will forever be remembered in the annals of crowdsourced Internet vengeance! When writer Monica Gaudio discovered that a magazine she'd never heard of, Cooks Source, had reprinted an article from her web site about medieval apple pies without her permission, she wrote to the editor asking for an apology and a $130 donation to the Columbia School of Journalism. Here's what world-class bonehead idiot Judith Griggs, editor of Cooks Source, had to say in response: "...honestly Monica, the web is considered 'public domain' and you should be happy we just didn't 'lift' your whole article and put someone else's name on it!... If you took offence and are unhappy, I am sorry, but you as a professional should know that the article we used written by you was in very bad need of editing, and is much better now than was originally. Yes, Griggs actually asked the writer to pay for the privilege of being ripped off!

Online law man: Virtual worlds need real laws Samantha Murphy, contributor (Image: Jo Ito)Tens of millions of people live, work and play in virtual worlds where anything goes. Greg Lastowka thinks we need to police these lawless frontiers What prompted you to write your new book, Virtual Justice? I've always been interested in technology law, and the issues surrounding law in virtual worlds are like canaries in a coal mine. Do you think we need laws covering things like electronic commerce, freedom of speech and defamation in the virtual world? Yes, we definitely do. What kinds of laws do you think we need most? We need to give careful consideration to how copyright operates in virtual worlds, where everything is mediated by the software. Then there's the question of virtual property. Have there been cases of people coming to grief over virtual theft? One that I talk about in the book is the case of a Chinese gamer named Qiu Chegwei. Surely technology has always influenced law. Yes, I think so.

The Initiative | ORCID The real cost of free | Cory Doctorow | Technology Last week, my fellow Guardian columnist Helienne Lindvall published a piece headlined The cost of free, in which she called it "ironic" that "advocates of free online content" (including me) "charge hefty fees to speak at events". Lindvall says she spoke to someone who approached an agency I once worked with to hire me for a lecture and was quoted $10,000-$20,000 (£6,300-£12,700) to speak at a college and $25,000 to speak at a conference. Lindvall goes on to talk about the fees commanded by other speakers, including Wired editor Chris Anderson, author of a book called "Free" (which I reviewed here in July 2009), Pirate Bay co-founder Peter Sunde and marketing expert Seth Godin. In Lindvall's view, all of us are part of a united ideology that exhorts artists to give their work away for free, but we don't practice what we preach because we charge so much for our time. It's unfortunate that Lindvall didn't bother to check her facts. Why do I do this? Networks won't be harder to use.

ReaderMeter: researcher-level metrics based on readership In a blog post last week, Dario Taraborelli officially announced ReaderMeter. ReaderMeter takes the usage data from reference managers (starting with Mendeley) to analyze the impact of publications by a particular author. ReaderMeter is a welcome addition to other metrics of researcher impact, most of which are citation-based. And ReaderMeter was hacked together in a few nights, so the service should improve over time. Dario mentions some of the current limitations in his blog post: Usage data only from Mendeley. ReaderMeter is visually pleasing and fun to use. Technical Lead Article-Level Metrics and Product Manager, PLOS

11 Open Source Projects that Make Free Information Rock Photo via Todd Huffman via Flickr Creative Commons What happens when data is available for anyone to access and use? What happens when projects are open source so people can contribute their skills to improve it? We're now more than ever connected to a wealth of information stored literally at our fingertips -- if we can access it. So the concept of sharing is useful beyond creating tool libraries or Zipcar services. Sharing, when extended to information, can do amazing things, from creating fascinating mash-ups of data to explore and extrapolate new ideas to improving our transportation systems. Screengrab via Encyclopedia of LifeEncyclopedia of LifeA partnership between scientists and the general public, the goal of Encyclopedia of Life is to catalog information about every living thing on earth, and make that information freely available to every human being. PLoS One JournalAccess to published scientific research is vital to improving current research.

Eight criteria for a Journal of the FutureResearch cycle research The concept of the scientific journal is in dare need of adapting to the times we live in. To the long stream of observations in this direction ( my favourite ), Heinz Pampel and Lambert Heller have now added a set of eight criteria that they deem to be important “für ein informationswissenschaftliches Journal der Zukunft”. I basically agree with all they state in there (indeed, some of the phrasings could have been mine), so my criticism focuses on the format: The criteria were posted only in a version that is not editable by anyone else. Of course, their CC-BY license allows me to take a copy and make it editable, which I will do in the following. The criteria were developed with information science in mind. We can of course imagine a future in which translation tools are good enough for everyone to write in their preferred language(s), but this is not mentioned, so I find it a bit strange to put these thoughts out in German only .

On Criticism of ACS and C&EN | Terra Sigillata September 28th, 2010 • 08:09 I put up a version of this post up a few days ago at my other blog, Take As Directed , on the new Public Library of Science (PLoS) network, PLoS Blogs . There, the post netted a total of one comment . That one was not from a chemist but rather from my respected library information scientist colleague, Christina Pikas , formerly with me at ScienceBlogs and now at the vibrant Scientopia blogger collective . Before I was offered that slot at PLoS to write among a group of truly lofty science journalists, editors, book authors, and bloggers, I had made arrangement for my long-time blog, Terra Sigillata, to move here to CENtral Science . But back to science. When blogger friends learned I’d be writing at both CENtral Science and PLoS, many looked at me askance – or as much as one could online. Uh, yeah. And for all the open-access pontificating that all information should be free, I think that we all had to take a moment to reflect a couple of weeks ago when Mr.

Has Oracle been a disaster for Sun's open source? Why do we still publish research (via) papers?Research cycle research Mind the bugs in the system: papers. Photo: Jenn Forman Orth When I lost a WiFi connection recently, I was left with the usual error message, which led me to look more attentively at the URL than I am used to. Its content part read “Lets-Stop-Publishing-Research”. I had come there because the link appeared interesting in some way (don’t remember the details now), yet stopping to publish research was not what I would have expected to see. In any case, that supposed title triggered a chain of thoughts that circled around the arguments that could be put forward for stopping to publish research. When the connection was back a few moments later, it turned out that this was a case of URL chopping, as is commonly implemented on blogging platforms — the title of the post was actually “ Let’s Stop Publishing Research Papers “, which is not only more probable as a title but also, as a conclusion, well in line with my thoughts on the matter . Internal vigilance. External vigilance.