40 maps that explain the world 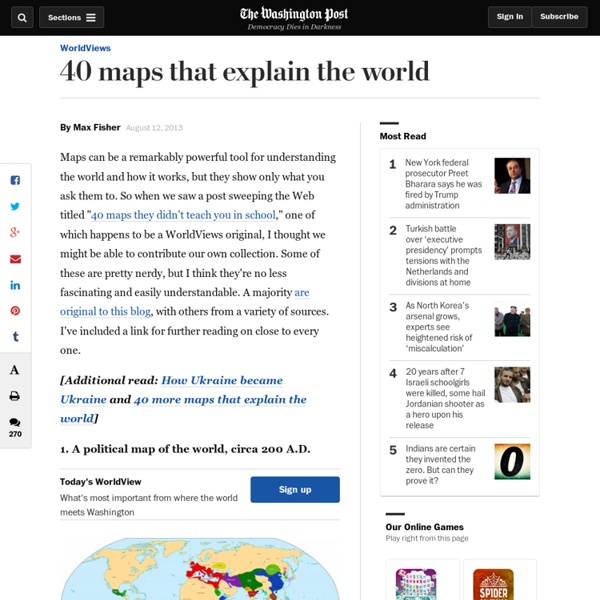 Maps can be a remarkably powerful tool for understanding the world and how it works, but they show only what you ask them to. So when we saw a post sweeping the Web titled "40 maps they didn't teach you in school," one of which happens to be a WorldViews original, I thought we might be able to contribute our own collection. Some of these are pretty nerdy, but I think they're no less fascinating and easily understandable. A majority are original to this blog, with others from a variety of sources. [Additional read: How Ukraine became Ukraine and 40 more maps that explain the world] 1. world worldviews Dallas shooting updates News and analysis on the deadliest day for police since 9/11. post_newsletter353 follow-dallas true after3th false Today's WorldView What's most important from where the world meets Washington Please provide a valid email address. Click to enlarge. 2. Click to enlarge. This might be useful in planning your next vacation, although there are some big surprises in the results. 3.

Global city The most complex of these entities is the "global city", whereby the linkages binding a city have a direct and tangible effect on global affairs through socio-economic means.[1] The use of "global city", as opposed to "megacity", was popularized by sociologist Saskia Sassen in her 1991 work, The Global City: New York, London, Tokyo[2] though the term "world city" to describe cities that control a disproportionate amount of global business dates to at least the May 1886 description of Liverpool by The Illustrated London News.[3] Patrick Geddes also used the term "world city" later in 1915.[4] Cities can also fall from such categorization, as in the case of cities that have become less cosmopolitan and less internationally renowned in the current era. Criteria Characteristics Although what constitutes a world city is still subject subject to debate, standard characteristics of world cities are:[6] Studies GaWC study A map showing the distribution of GaWC-ranked world cities (2010 data) See also

Luo people of Kenya and Tanzania The Luo (also called Joluo, singular Jaluo) are an ethnic group in western Kenya, eastern Uganda, and in Mara Region in northern Tanzania. They are part of a larger group of ethnolinguistically related Luo peoples who inhabit an area ranging from Southern Sudan (South Sudan), South-Western Ethiopia, Northern and Eastern Uganda, South-Western Kenya and North-Eastern Tanzania. The Luo are the third largest ethnic group (13%) in Kenya, after the Kikuyu (22%) and the Luhya (14%). The Luo and the Kikuyu inherited the bulk of political power in the first years following Kenya's independence in 1963. The Luo population in Kenya was estimated to be 2,185,000 in 1994 and 4.1 million in 2010 according to Govt census. However the figure was disputed by many Luos as not scientific since a significant portion of people previously considered as Luo were now counted as Suba. The main Luo livelihoods are fishing, farming and pastoral herding. History[edit] Pre-colonial times[edit] Colonial times[edit]

The Dominican Republic Erased Birthright Citizenship The Dominican Republic also has a long, brutal history of anti-Haitian racism. During his rule from 1930 to 1961, the fascist dictator Rafael Trujillo built a racialized concept of Dominican national identity on the fuzzy idea that the descendants of Spanish slavery on the eastern part of the island had higher levels of European ancestry than, and thus were superior to, the descendants of French slavery on the western part of the island. This rhetoric led to a 1937 rampage in which Dominican soldiers and allied citizens massacred thousands of people who they identified as Haitians. Martha S. In the decades that followed, Haitian migrants in the Dominican Republic remained largely confined to isolated company towns in the cane fields, known as bateyes. Because nationalists tend to be political conservatives, they often feel pressure to pretend that the radical changes they’re making aren’t changes at all. Courts did not like this.

Mountain of Tongues Can a nationalist movement from the internet save the world's most scattered people? This story was produced in partnership with the Pulitzer Center. What the ancients knew about the fortress of mountains between the Black and Caspian Seas was that it was home to many peoples and impossible to reach. Herodotus heard from the Persians that “many and all manner of nations dwell in the Caucasus,” most of whom he claimed lived on wild shrubs. But the first person to penetrate the Caucasus and report back in reliable detail on its bewildering diversity was a tenth-century Arab historian and geographer named Abu al-Hasan Ali ibn al-Hussain al-Mas’udi. In the Caucasus, al-Mas’udi found “seventy-two nations, and every nation has its own king and language which differs from the others.” This observation—that high-friction terrain isolates and thereby fosters cultural difference—has been echoed by anthropologists in our own era. The Circassians were scattered most thoroughly and brutally of all.