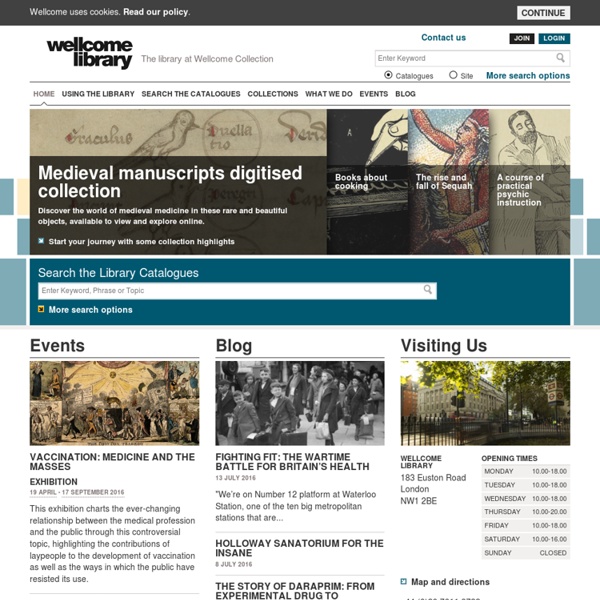 Information Philosopher - Introduction Introduction The Information Philosopher has established that quantum mechanics and thermodynamics play a central role in the creation of all things. This finding has enormous implications for philosophy and metaphysics. Instead of a closed universe that is winding down deterministically from an initial state of high information, we find the universe is open and increasing information indeterministically from an initial state of relatively high entropy and low information.

Library - Library, The University of York Library essentials YorSearchSearch the Library catalogue, check your account & more E-resources GuideBrowse ebook and ejournal collections, and databases The Quest For Gnosis — Gabriel D. Roberts Those who have read my other works know that I came from fundamentalist Christian background; a mindset that clearly set boundaries of what I should and should not believe. This book may touch on some of those ideas in conversation, but will not be the primary focus here, instead the focus is upon equipping you with a new sense of wonder and understanding of just how big this omniverse is and just how amazing a part of it you can be. Though you will find the definition to vary within the pages of this book, the term Gnosis in its most basic form simply means knowledge. Going more deeply Gnosis means intrinsic knowledge of a mystical nature; something that is personal and experiential. It is my opinion that the best way to understand something is to take a hands on approach to its investigation, not taking other people’s word for it. Poetic speech is nice, but it does little to stem the tide of real evil at work in this world.

UCL Library Services Students Staff Visitors Facts about Ecstasy MDMA (3,4-methylenedioxymethamphetamine), commonly referred to as ecstasy or molly, is a drug that is sold either as a pressed pill taken orally, or as a powder that is snorted or swallowed. MDMA’s effects resemble those of both stimulants and psychedelics. A typical dose of 100 to 125 mg lasts four to six hours. How the Starfish Prime Nuclear Bomb Worked – blowing up the radiation belts for science by Marshall Brain | July 2, 2010 Imagine you are a scientist. In 1958 there is a big discovery – some of the very first satellites launched by the United States discover the Van Allen radiation belts. Over the next couple of years they are further studied and characterized by more satellites. So imagine that you are a scientist, and there are no nuclear proliferation or testing bans in place yet.

How extreme isolation warps the mind Sarah Shourd’s mind began to slip after about two months into her incarceration. She heard phantom footsteps and flashing lights, and spent most of her day crouched on all fours, listening through a gap in the door. That summer, the 32-year-old had been hiking with two friends in the mountains of Iraqi Kurdistan when they were arrested by Iranian troops after straying onto the border with Iran. Accused of spying, they were kept in solitary confinement in Evin prison in Tehran, each in their own tiny cell. She endured almost 10,000 hours with little human contact before she was freed. One of the most disturbing effects was the hallucinations.

"The Man Who Runs The World's Smartest Website" (in The Observer) Since the mid-1960s John Brockman has been at the cutting edge of ideas. He is a passionate advocate of both science and the arts, and his website Edge is a salon for the world's finest minds To say that John Brockman is a literary agent is like saying that David Hockney is a photographer. For while it's true that Hockney has indeed made astonishingly creative use of photography, and Brockman is indeed a successful literary agent who represents an enviable stable of high-profile scientists and communicators, in both cases the description rather understates the reality. More accurate ways of describing Brockman would be to say that he is a "cultural impresario" or, as his friend Stewart Brand puts it, an "intellectual enzyme". (Brand goes on helpfully to explain that an enzyme is "a biological catalyst – an adroit enabler of otherwise impossible things".)

Index page It is currently Wed May 22, 2013 7:21 am View unanswered posts • View active topics Forum Rules and Features This section will contain posting guidelines for the forum along with any other information that is relevant to this forum. 13 Topics 326 Posts Last post by madmaxNZ Sat May 18, 2013 9:01 pm Endless-Sphere Wiki Things related to the E-S Wiki 2 Topics 21 Posts Last post by crossbreak Sun Mar 31, 2013 10:20 am General Discussion Talk about anything and everything here within reason. NeuroLogica Blog Jan 13 2017 Cognitive Biases in Health Care Decision Making This was an unexpected pleasant find in an unusual place. The Gerontological Society of America recently put out a free publication designed to educate patients about cognitive biases and heuristics and how they can adversely affect decision making about health care.

Profile: Jebsen Center - Feature - Tufts University When it comes to fighting terrorism, The Fletcher School's Jebsen Center for Counter-Terrorism Studies emphasizes predictive strategies over preemptive action. "Imagine tomorrow, a nuclear device goes off in Cincinnati, Ohio." The frightening scenario is posed by Brig. Breaking the Speed of (Light) Thought An announcement a couple of weeks ago claimed that the speed of light had been broken. A pair of German physicists, Dr. Gunter Nimtz and Dr.