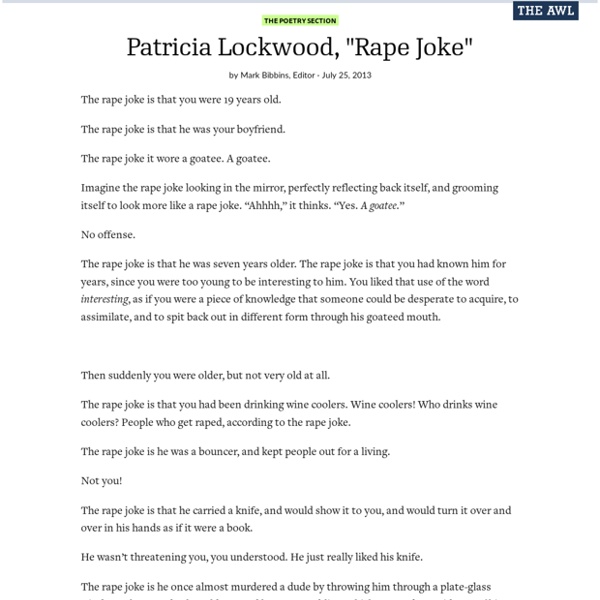 Other Translations of "A River Merchant's Wife" Other Translations of 'A River Merchant's Wife" Transcription of Ernest Fenollosa's Notebook (Pound's Source) Chokanka Could the Facebook Win Be Feminism’s Tipping Point? Photo courtesy womenactionmedia.org . Feminists won big on Tuesday when an online campaign forced Facebook to revisit their policies on misogynist hate speech. In just a week, the protest—organized by Women, Action & the Media (WAM), Everyday Sexism and writer Soraya Chemaly—generated nearly 5,000 e-mails and 60,000 tweets directed at Facebook’s advertisers. After companies started to pull ads, Facebook responded with a lengthy statement committing to change their policies and admitting they hadn’t been doing their due diligence curtailing violent sexism: “In recent days, it has become clear that our systems to identify and remove hate speech have failed to work as effectively as we would like, particularly around issues of gender-based hate…. We need to do better—and we will.” Jaclyn Friedman, executive director of WAM,* says the win left her “cautiously optimistic.”

‘Next Generation’ of 20 hotly-tipped poets announced by Poetry Book Society From former heroin addict Sam Willetts to the hit performance poet Kate Tempest, they are the up-and-coming new poets who have been named as the Carol Ann Duffys and Simon Armitages of the future. The Poetry Book Society has released its once-in-a-decade list of Next Generation poets, which has in the past tipped names from Duffy and Armitage to Alice Oswald and Don Paterson for future success. The 20 new names, said the poetry organisation which was founded by TS Eliot in 1953, are expected to “dominate the poetry landscape of the coming decade”. More than half of them are women, from Tempest, the 27-year-old south London performance poet whose spoken-word theatre show Brand New Ancients won her the Ted Hughes award for innovation in poetry last year, to 66-year-old Annie Freud.

This Five-Minute Video Is Every Relationship You've Ever Had This could be a more accurate dialogue, IMO: P1: This is fun, there's something happening next week, we should go. P2: Yeah, that was a blast. Stranger Danger New Comic! TRANSLATIONS:Spanish (Credit: Taller de Teoría Queer) All of the experiences in this comic are either directly from my own life or related to me by people I know and care for. I don’t know, I’m all mad today. In the elevator in my building a woman decided she had an opinion about something I was wearing around my neck and grabbed it so she could tell me what she thought, and got mad when I told her to fuck off.