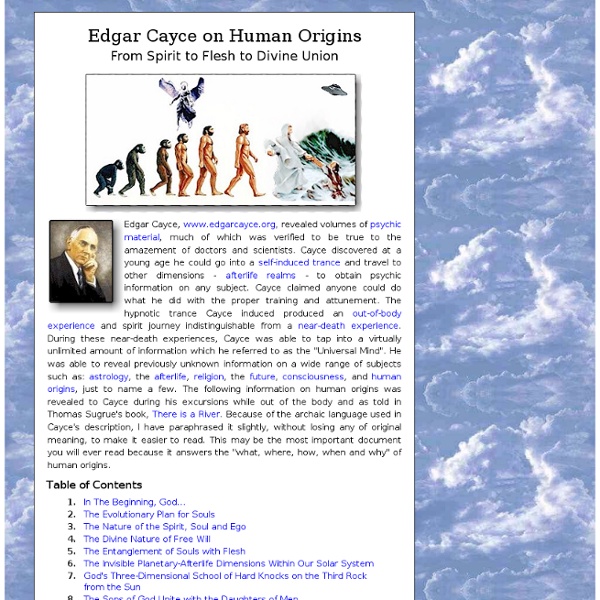 People usually demand a beginning, so in the beginning there was a sea of spirit and it filled all of space. The spirit was static, content, and aware of itself. It was a giant resting on the bosom of its thought and contemplating what it is. Then the spirit moved into action. It withdrew into itself until all of space was empty. God desired self-expression and desired companionship; therefore, God projected the cosmos and souls. Each design carried within it the plan for its evolution - both physical and spiritual. All things are a part of God and an expression of God's thought. All things, including the souls of individuals, were created as "fractals" of God for companionship with God - the "Whole." The pattern God used to create souls was the pattern of God's own Spirit. The spirit of the individual existed before the soul of the individual was created. The nucleus of the soul was the balance of positive and negative forces equal in power. But these things could happen. Related:  Astronomy

The Celestine Prophecy The Celestine Prophecy is a 1993 novel by James Redfield that discusses various psychological and spiritual ideas which are rooted in many ancient Eastern Traditions and New Age spirituality. The main character of the novel undertakes a journey to find and understand a series of nine spiritual insights on an ancient manuscript in Peru. The book is a first-person narrative of the narrator's spiritual awakening as he goes through a transitional period of his life. Summary[edit] The book discusses various psychological and spiritual ideas that are rooted in many ancient Eastern Traditions, such as how opening to new possibilities can help an individual to establish a connection with the Divine. The story opens with the male narrator becoming reacquainted with an old female friend, who tells him about the Insights, which are contained in a manuscript dating to 600 BC, which has been only recently translated. Influences[edit] Publishing history, adaptations and sequels[edit] References[edit]

The Multidimensional Human There is evidence to suggest that other worlds or dimensions exist just beyond the range of our normal perception, but we remain unaware of them because our minds are not objectively conscious at these higher levels. Our normal level of consciousness is restricted in some way, preventing us from tuning in to these subtler realms. If you have young children you might have noticed them looking a things that don't appear to be there or talking to "imaginary friends". Very young children can actually see into these hidden worlds, but they lose the ability as they grow older. In altered states of consciousness the censorship of the physical mind ceases. Altered states can be induced by certain drugs, holotrophic breathing techniques and meditation, but they also occur naturally every night in the hypnogogic state when we are not quite asleep but not quite awake. What am "I"? Human Experience The physical body allows us to move around and interact with things in this physical world.

Time The flow of sand in an hourglass can be used to keep track of elapsed time. It also concretely represents the present as being between the past and the future. Time is a dimension in which events can be ordered from the past through the present into the future,[1][2][3][4][5][6] and also the measure of durations of events and the intervals between them.[3][7][8] Time has long been a major subject of study in religion, philosophy, and science, but defining it in a manner applicable to all fields without circularity has consistently eluded scholars.[3][7][8][9][10][11] Nevertheless, diverse fields such as business, industry, sports, the sciences, and the performing arts all incorporate some notion of time into their respective measuring systems.[12][13][14] Some simple, relatively uncontroversial definitions of time include "time is what clocks measure"[7][15] and "time is what keeps everything from happening at once".[16][17][18][19] Temporal measurement and history[edit] World time[edit]

Arabic phrasebook The following phrasebook deals mostly with Modern Standard Arabic. See the Lebanese Arabic phrasebook, Jordanian Arabic phrasebook or the Egyptian Arabic phrasebook for Arabic dialects relating to those regions/countries. Arabic is the fourth most widely-spoken language in the world and is one of the six official languages of the United Nations. It is spoken in many popular destinations in North Africa and the Middle East. There are many regional dialects, but a standard Arabic language is maintained due to religious needs and region-wide media. Arabic is written from right to left. For communication purposes while travelling and using this guide, it is very important to note that Arabic is divided into Classical Arabic (mostly used in print) and Colloquial Arabic. Pronunciation guide[edit] Arabic pronunciation varies widely from place to place, almost to the extent of making it unintelligible even for native Arabic speakers. As a general rule: . , or kh while using the voice box. كيف حالك؟

Internet Sacred Text Archive Home This Year’s Finest Conjunction: Venus and Jupiter Two brightest planets Venus and Jupiter come as close as a third of a degree apart as seen from North America. It will be easy to spot them in the western sky as no other celestial body will outshine the beautiful tandem when the sun and the moon are down. “To the eye they’ll look like a double star,” said Kelly Beatty, a senior editor at Sky & Telescope magazine. “Anyone who hasn’t glanced at the evening sky for a while will be surprised by how dramatically tight the pairing is.” The closest conjunction will happen on June 30th and July 1st, 2015. Use Star Walk to find your way across the sky and see the exact timing for your location. Star Walk is available worldwide on iOS, Android, Kindle and Windows Mobile.

Evidence for God from Science Planet Tozer Creative Review commissioned photographer Jason Tozer to shoot these pictures on behalf of Sony using its new Alpha 350 digital camera. They are, in fact, all common-or-garden soap bubbles, shot in-camera. We'll be revealing more on how Tozer obtained these stunning images later in the week. The full series is shown below and to see them at a larger size simply click on each image. Alternatively you can check out the Flickr set we've created for the project at CR's photostream page. Click here for more details on the new Sony Alpha D-SLR. For more of Tozer's work, see jasontozer.com

The Gnosis Archive: Resources on Gnosticism and Gnostic Tradition What is Gnosticism? Many visitors have requested some basic introductory material explaining Gnosticism. To meet this need we offer these "places to start": two short articles, The Gnostic World View: A Brief Summary of Gnosticism and What is a Gnostic?; and an audio lectures (mp3 format) on the Gnostic concept of Christ: The Misunderstood Redeemer. A reading of the Overview of the Gnostic Society Library collection will also give a useful brief introduction to the history and textual legacy of the Gnostic tradition. For more in-depth reading suggestions visit the Gnostic Society Bookstore—you will find offered there a selection of the best introductory and advanced books on Gnosticism, along with brief reviews of recommended books. Meditations Take a moment to reflect on a brief meditation and reading from the Gnostic scriptures, selected from this week's Gnostic liturgy. The Gnostic Society Library Documentary films: Nag Hammadi Library collection updated: Gnosis and C. "C.G. C. C.

9 Key Components of the Shift to Higher Consciousness This article originally appeared in WakingTimes.com. Facing considerable political, economic, social and ecological crises, the human race is desperate for a transformation and a new direction. Business as usual ensures that we are doomed to run a course of half-conscious self-destruction, as man-made catastrophes multiply and stress mounts in every aspect of life. The social problems and entrenched patterns at the source of global issues are too vast and complex to be solved at the personal level, yet, paradoxically, the personal transformation of the individual offers a lonesome opportunity to avert the catastrophes we are engineering for ourselves. The shift. Personal evolution is both the great duty and the great joy of all human beings and is a process of divine significance, frequently unfolding in overlapping stages and related developments. 1. 2. 3. 4. This is the ultimate test. 5. 6. 7. 8. 9. Conclusion

Maya Once considered an unsolvable enigma, recent advances in the decipherment of the Maya writing system has not only shed light on the mechanics of the script, but also on the socio-political, artistic, and historical aspects of Maya civilization. As a whole, the Maya people created the longest lasting civilization of the New World. It became distinguishable from other early farming cultures of Mesoamerica in the middle of the first millenium BCE, when the first great Maya cities were constructed. Their culture endured through changes, wars, and disasters until it was suppressed by the Spanish conquest in the 16th and 17th centuries. The last indepedent Maya kingdom of Tayasal, fell as late as 1697. However, the Maya survived and there is estimated to be at least one million Mayas living in Mexico, Guatemala, El Salvador, and Honduras today. General Overview The Maya hieroglypic writing is arguably one of the most visually striking writing systems of the world. Numbers and Calendar Syllabary