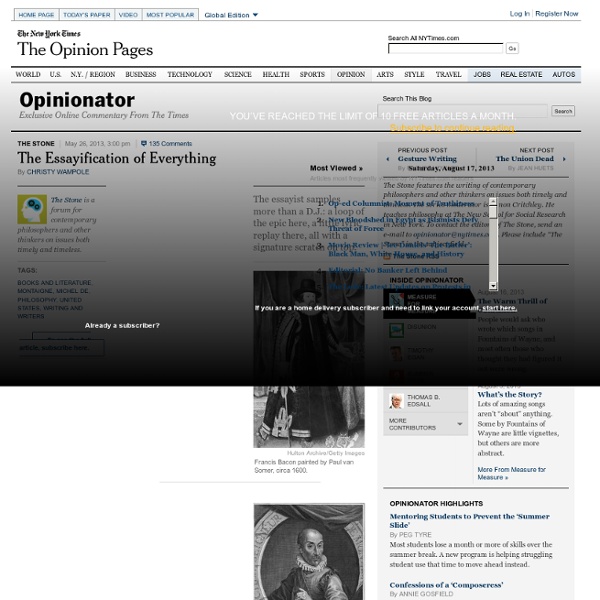 The Stone is a forum for contemporary philosophers and other thinkers on issues both timely and timeless. Lately, you may have noticed the spate of articles and books that take interest in the essay as a flexible and very human literary form. These include “The Wayward Essay” and Phillip Lopate’s reflections on the relationship between essay and doubt, and books such as “How to Live,” Sarah Bakewell’s elegant portrait of Montaigne, the 16th-century patriarch of the genre, and an edited volume by Carl H. Klaus and Ned Stuckey-French called “Essayists on the Essay: Montaigne to Our Time.” The essayist samples more than a D.J.: a loop of the epic here, a little lyric replay there, all with a signature scratch on top. It seems that, even in the proliferation of new forms of writing and communication before us, the essay has become a talisman of our times. What do I mean with this lofty expression? Let’s start with form’s beginning. The possibilitarian is a virtuoso of the hypothetical. Related:  e-learning

Picturing the Personal Essay: A Visual Guide | Creative Nonfiction A design professor from Denmark once drew for me a picture of the creative process, which had been the subject of his doctoral dissertation. “Here,” he said. “This is what it looks like”: Aha, I thought, as we discussed parallels in the writing process. Nothing is wasted though, said the design professor, because every bend in the process is helping you to arrive at your necessary structure. The remarkable thing about personal essays, which openly mimic this exploratory process, is that they can be so quirky in their “shape.” Narrative with a lift Narrative is the natural starting place since narrative is a natural structure for telling others about personal events. Take, for example, Jo Ann Beard’s essay “The Fourth State of Matter.” Narrative essays keep us engaged because we want answers to such questions. One interesting side note: trauma, which is a common source for personal essays, can easily cause an author to get stuck on the sort of plateau Kittredge described.

I was 16 when my mom died. I raised my sisters the best I could Photo by Jaroslav Kocian/Flickr via Getty Images We never expected my father to take care of us after my mother died, and we were right. Mom was 53 when colorectal cancer killed her. She left me three girls to raise and a household to run. I was 16. My sisters and I grew up in Manhattan. When my mother got sick, I saw pitching in as an extension of my normal eldest sister responsibilities. In the middle of my mother’s illness, my family moved from New York City to the Poconos. But then Mom was diagnosed with advanced colorectal cancer. My accident happened while bike-riding with a friend—exactly the kind of outing I’d dreamed of. “Yes,” I said, though I wasn’t. That night, though Mom hadn’t been upstairs in months, she braved the steps to wake me every two hours to check for a concussion. “What’s your name? Cancer had wreaked havoc on her lower body, and a heating pad covered in yellow floral fabric lived permanently on her recliner. On her lap she held a shiny navy folder. “What?”

Blog » The Best Work in Literature If you’re new here, you may want to subscribe to our RSS feed . Thanks for reading! Photo by Daniel Leininger / Flickr The following post by Manjula Martin ( @manjulamartin ) is part of our online companion to our Spring 2013 issue on The Business of Literature. Click here for an overview of the issue . i. Even then, I viewed my summer gig as work I would one day leave behind: when I grew up, I was certain, I would become a full-time artist. My family’s store was housed in a grand 1910 sandstone building, formerly a bank. In the business of literature, the people who mind the store—from writers to editors to Tumblrs— often have other jobs, too. ii. I was sixteen and about to graduate from high school by the time a coworker said to me, “So, what are you gonna do now?” “I dunno,” I said, “maybe drop out of college and move to New York and become a famous writer by the age of twenty-one?” Did I really believe I would be a bestselling author with a sweet Soho loft by age twenty-one? iii. iv.

Falling Men: On Don DeLillo and Terror, Chris Cumming New York Police officers are seen under a news ticker in Times Square in New York, April 16, 2013. (REUTERS/Brendan McDermid) Some terrorist attacks become cultural obsessions, while others are forgotten completely. There were three bombings in New York City in 1975, none of which I’ve ever heard talked about, each of which would probably shut down the city if it happened now. These were underground disturbances, moments of disorder that helped warp the culture, even if they weren’t absorbed or even remembered. DeLillo’s fictional treatments of terrorism and mass shootings are extensive. When Falling Man came out, reviewers noted that DeLillo’s earlier books had seemed to anticipate the events of September 11, as well as the aura of dread and unreality that followed. No matter how common they’ve become, terrorist attacks and gun massacres always seem unprecedented. Texas again. Last week’s events in Boston conform to this pattern. Dzhokhar is the other side of Oswald.

Using Mind Maps For Creating Novels | No Wasted Ink Take a word. Place that word in the center of a sheet of paper and circle it. Let the word tease your brain. Allow related ideas, words or concepts to be inspired by this word. Write down those new ideas around the word. Draw lines to connect them. When I’m first beginning a novel’s outline, I like to use mind maps to help generate characters and plot points. Overall Plot Mind Map Start with a central Node, the title of your book. Next I generate mind maps for each of the points that I come up with in the hubs. Character Generation Mind Map Write the name of your character in the center of a sheet of paper. Plot Generation Mind Map Think of an moment in time that will happen in your novel. I am a paper person and write my mind maps in a composition notebook with my fountain pens. I have included a review of five of the the mind mapping software programs below. Freemind This was the first mind map program that I used when I started creating the maps. Xmind MindMeister TheBrain Prezi Like this:

Frank Sinatra Has a Cold - Gay Talese - Best Profile of Sinatra In the winter of 1965, writer Gay Talese arrived in Los Angeles with an assignment from Esquire to profile Frank Sinatra. The legendary singer was approaching fifty, under the weather, out of sorts, and unwilling to be interviewed. So Talese remained in L.A., hoping Sinatra might recover and reconsider, and he began talking to many of the people around Sinatra -- his friends, his associates, his family, his countless hangers-on -- and observing the man himself wherever he could. The result, "Frank Sinatra Has a Cold," ran in April 1966 and became one of the most celebrated magazine stories ever published, a pioneering example of what came to be called New Journalism -- a work of rigorously faithful fact enlivened with the kind of vivid storytelling that had previously been reserved for fiction. Click here to read the six other greatest Esquire stories ever published -- in their entirety. Frank Sinatra Has a Cold By Gay Talese Frank Sinatra does things personally. "No," Ellison said. "No."

Los Angeles Review of Books - John Gray’s Godless Mysticism: On "The Silence Of Animals" The Joke’s on You | Steve Almond Steve Almond [from The Baffler No. 20, 2012] Among the hacks who staff our factories of conventional wisdom, evidence abounds that we are living in a golden age of political comedy. The New York Times nominates Jon Stewart, beloved host of Comedy Central’s Daily Show, as the “most trusted man in America.” But their sanctification is not evidence of a world gone mad so much as an audience gone to lard morally, ignorant of the comic impulse’s more radical virtues. Our lazy embrace of Stewart and Colbert is a testament to our own impoverished comic standards. Fans will find this assessment offensive. We have come to accept coy mockery as genuine subversion and snarky mimesis as originality. Michiko Kakutani of the New York Times offered a summation of the majority opinion in a 2008 profile of Stewart that doubled as his highbrow coronation. The most famous example is Colbert’s turn as the featured speaker at the 2006 White House Correspondents’ Association Dinner. You got that?

How To Write A Personal Essay Photo Credit: Colleen Kinder Leslie Jamison's incredible new essay collection, The Empathy Exams, covers topics ranging from random violence to HBO's Girls to abortion to bad romance to stereotypes, proving she can write about anything. Here, she tells us how she approaches personal nonfiction writing, as well as provides tips. When people ask what kind of nonfiction I write, I say “all kinds,” but really I mean I don’t write any kind at all: I’m trying to dissolve the borders between memoir and journalism and criticism by weaving them together. When I talk about writing essays that resonate beyond the personal, I don’t mean that personal material isn’t sufficient. I’m interested in essays that follow the infinitude of a private life toward the infinitude of public experience. In my own essay, “The Empathy Exams,” I tell several personal stories—an abortion, a failed heart surgery—inside a broader inquiry into the terms of empathy itself: What does it consist of?

Small Talk I recently found myself sitting across a table from a stranger, chewing awkwardly in silence. It was a familiar scenario: a hole-in-the-wall sandwich shop with not enough tables and me sitting alone, assenting readily when an older woman asked if she could share my premium slice of real estate. She sat down and we both began to eat, eyes studiously averted—quickly, the silence became unbearable. The weather has a long-standing monopoly on the small talk market, and it’s not hard to see why. The Oxford English Dictionary dates the first appearance of the term “small talk” to eighteenth-century British Parliamentarian Lord Chesterfield’s Letters to His Son , a collection of pedagogical nuggets dispensing wisdom on a comprehensive range of topics, as befits a book with the subtitle “On the Fine Art of Becoming a Man of the World and a Gentleman.” A little small talk before getting down to business is like washing your hands in preparation for a meal. Heidegger is not unaware of this. .

American Anthropological Association: English As She Is Spoke Written by Rosina Lippi Green In discussions about language, prescriptive types generally scorn academic linguists; they see us as language anarchists who reject the very idea of rules. In fact, any linguist will tell you that all human language is structured and rule governed. What linguists and anthropologists object to are pronouncements about good and bad language which are founded in aesthetics, fashion, or prejudice, but served up as objective truths with a side order of superiority. Less important (but still irritating) is the way many prescriptivists get wound up in inane controversies about punctuation, which has nothing to do with spoken language, but still will be filed under "proper grammar." Prescriptivists can be purposefully obtuse and more than bellicose when arguing a position. Sociocultural linguists are actually interested in prescriptivism. 1. 2. 3.