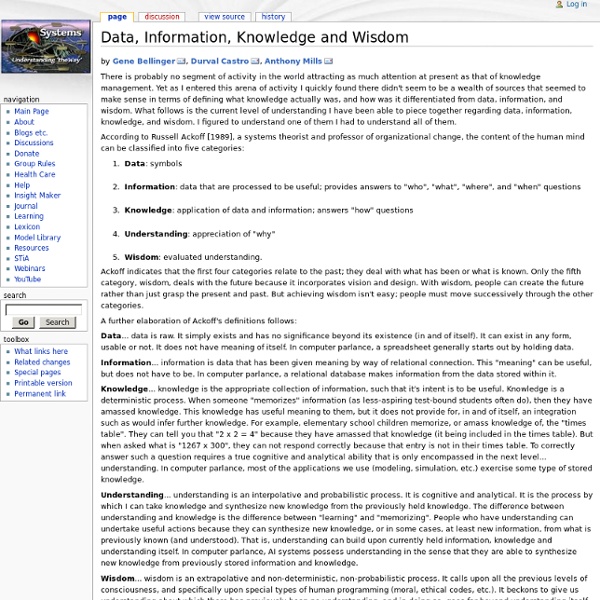 From SystemsWiki by Gene Bellinger, Durval Castro, Anthony Mills There is probably no segment of activity in the world attracting as much attention at present as that of knowledge management. Yet as I entered this arena of activity I quickly found there didn't seem to be a wealth of sources that seemed to make sense in terms of defining what knowledge actually was, and how was it differentiated from data, information, and wisdom. What follows is the current level of understanding I have been able to piece together regarding data, information, knowledge, and wisdom. According to Russell Ackoff [1989], a systems theorist and professor of organizational change, the content of the human mind can be classified into five categories: Ackoff indicates that the first four categories relate to the past; they deal with what has been or what is known. A further elaboration of Ackoff's definitions follows: Data... data is raw. Ex: It is raining. Ex: It rains because it rains. Now consider the following: Related:  Wisdom

Data, Information, Knowledge, & Wisdom by Gene Bellinger, Durval Castro, Anthony Mills There is probably no segment of activity in the world attracting as much attention at present as that of knowledge management. Yet as I entered this arena of activity I quickly found there didn't seem to be a wealth of sources that seemed to make sense in terms of defining what knowledge actually was, and how was it differentiated from data, information, and wisdom. What follows is the current level of understanding I have been able to piece together regarding data, information, knowledge, and wisdom. I figured to understand one of them I had to understand all of them. According to Russell Ackoff, a systems theorist and professor of organizational change, the content of the human mind can be classified into five categories: Ackoff indicates that the first four categories relate to the past; they deal with what has been or what is known. A further elaboration of Ackoff's definitions follows: Data... data is raw. Ex: It is raining. What is it?

Lego Serious Play at CERN, Challenge Based innovation CBi is the latest iteration of an evolving experiment at CERN in Geneva. The CBi acronym stands for “Challenge Based innovation”, and the experiment pulls in students from several countries and multiple disciplines. The Scimpulse Foundation collaborates with CERN since 2013 and in this occasion we facilitate a concept design workshop. It’s a sunny September morning in Mayrin, the outskirts of Geneva, right on the side of the ATLAS experiment building there is a new shell enclosure where a bunch of students practice and learn about innovation. Dr. Marco Manca is the coach of the team and he wants to make sure that they come out of the experience with a new mindset. The challenge is to design something that may enable blind people to perceive the surrounding environment; maybe some type of augmented sensory device. They call themselves the “Heisenberg” team. They fly through the training! what is Vision? To know how we did it, keep on reading … Let me see! Let me see!

Knowledge to Wisdom The Problem with the Data-Information-Knowledge-Wisdom Hierarchy - David Weinberger by David Weinberger | 9:00 AM February 2, 2010 The data-information-knowledge-wisdom hierarchy seemed like a really great idea when it was first proposed. But its rapid acceptance was in fact a sign of how worried we were about the real value of the information systems we had built at such great expense. What looks like a logical progression is actually a desperate cry for help. The DIKW hierarchy (as it came to be known) was brought to prominence by Russell Ackoff in his address accepting the presidency of the International Society for General Systems Research in 1989. Where is the Life we have lost in living? Those lines come from the poem “The Rock” by T.S. The DIKW sequence made immediate sense because it extends what every Computer Science 101 class learns: information is a refinement of mere data. But, the info-to-knowledge move is far more problematic than the data-to-info one. So, what is “knowledge” in the DIKW pyramid? And humbug.

Knowledge Cartography Metacognition: The Gift That Keeps Giving Editor's note: This post is co-authored by Marcus Conyers who, with Donna Wilson, is co-developer of the M.S. and Ed.S. Brain-Based Teaching degree programs at Nova Southeastern University. They have written several books, including Five Big Ideas for Effective Teaching: Connecting Mind, Brain, and Education Research to Classroom Practice. Students who succeed academically often rely on being able to think effectively and independently in order to take charge of their learning. These students have mastered fundamental but crucial skills such as keeping their workspace organized, completing tasks on schedule, making a plan for learning, monitoring their learning path, and recognizing when it might be useful to change course. Many teachers we know enjoy teaching students how to wield one of the most powerful thinking tools: metacognition, or the ability to think about your thoughts with the aim of improving learning. Metacognition in the Brain How to Teach Students to Be More Metacognitive

Phronesis Phronēsis ( Greek : φρόνησις) is the Greek word for wisdom or intelligence which is a common topic of discussion in philosophy . In Aristotelian Ethics , for example in the Nicomachean Ethics it is distinguished from other words for wisdom and intellectual virtues – such as episteme and techne – as the virtue of practical thought. For this reason, when it is not simply translated by words meaning wisdom or intelligence, it is often translated as " practical wisdom ", and sometimes (more traditionally) as " prudence ", from Latin prudentia . Phronesis is also sometimes spelled Fronesis . [ edit ] Related concepts [ edit ] Intellectual In Book 6 of the Nicomachean Ethics , Aristotle distinguishes between two intellectual virtues which are sometimes translated as "wisdom": sophia and phronesis . [ edit ] Ethical According to Aristotle' theory on rhetoric phronesis is one of the three types of appeal to character ( ethos ). Gaining phronesis requires maturation, in Aristotle's thought:

Magic and Mystery, Chaos and Complexity Paradox My dictionary says a paradox is a seemingly absurd or contradictory statement even if it is well founded. In life there are many things that appear absurd and contradictory that are in fact real and true. These paradoxes mean we live in a world of mystery where there is always something new to learn and experience. Tonight I will talk about some of those paradoxes and how they might help us understand the world we live in. The first paradox is that we have two competing needs in life beyond our needs for mere survival. The second need we have is to be accepted by other people. So, one dancing partner is our need to belong; to feel accepted and connected. There is no unity without sacrifice. The other dancing partner is our need to be a unique individual. Just as dancers need to be balanced with one another. The extremes of only co-operating or only competing do not work. When we are out of balance we cause harm to ourselves and the people around us. . Zen Buddhism teaches us.

Social Value Creation: How To Manufacture Wisdom We call this wisdom In the old days, the hiring manager was the person to know if you wanted to get a job. They would read your resume and compare it with the “bell curve” in their mind. This bell curve contains a statistical sample of all similar situations that the manager has witnessed, the variables involved, and a range of outcomes observed across their long and illustrious career…Ohhhmmmmmm We Call This Simulated Wisdom Modern HR systems try to simulate this wisdom through a series of innovations such as key word search, structured interviews, personality tests, and employee incentives. Social Media vs. The Data need to be Normalized The world has become so strange, complex, technological, and interwoven, that no single person can possibly posses such a vast and broad set of experiences as to arrive at an optimized outcome every time. The Social Credit Score The Percentile Search Engine Example Innovation Economics Eventually, we will learn to manufacture wisdom …OhhhhMmmmmGeeeee

The secret to creativity, intelligence and scientific thinking: Being able to make connections 10.3K Flares Filament.io 10.3K Flares × When we shared this image from the @buffer Twitter account recently, it got me thinking. The Tweet resulted in over 1,000 retweets, which somehow was an indication that a lot of people seemed to agree with this statement. The original is from cartoonist Hugh MacLeod, who came up with such a brilliant way to express a concept that’s often not that easy to grasp. The image makes a clear point—that knowledge alone is not useful unless we can make connections between what we know. Lots of great writers, artists and scientists have talked about the importance of collecting ideas and bits of knowledge from the world around us, and making connections between those dots to fuel creative thinking and new ideas. This is a really fun, inspiring topic to read about, so I collected some quotes and advice from my favorite creative thinkers about the importance of making connections in your brain. Connections fuel creativity: nothing is original 1. 2. 3. P.S.