The Power Of The Mind: How To Train Yourself To Be More Successful : Managing 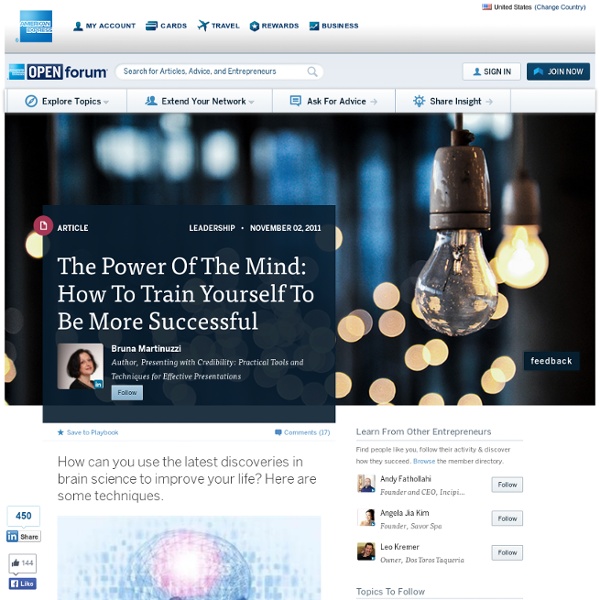 How can you use the latest discoveries in brain science to improve your life? Here are some techniques. November 02, 2011 Leadership tycoon Warren Bennis once said, “We seem to collect information because we have the ability to do so, but we are so busy collecting it that we haven’t devised a means of using it. The true measure of any society is not what it knows but what it does with what it knows.” There is a wealth of information at our disposal today on the latest discoveries in brain science. We can either drown in this information or turn it into a lifesaver by extracting its practical knowledge. Use visualization to learn a new skill Neuroplasticity is the ability of the brain to continuously create new neural pathways. In a Harvard University study, two groups of volunteers were presented with a piece of unfamiliar piano music. Albert Einstein, who is credited with saying that “imagination is more important than knowledge,” used visualization throughout his entire life. Parker J.

quotes Beware of your thoughts, they become your words. Beware of your words, they become your actions. Beware of your actions, they become your habits. Beware of your habits, they become your character. Beware of your character, it becomes your destiny. - Unknown I hear, I forget. How to Develop a Sound Mind A sound mind in a sound body, is a short, but full description of a happy state in this World: he that has these two, has little more to wish for; and he that wants either of them, will be little the better for anything else. – John Locke There are a number of diverse issues that could alter our wellbeing / contentment — entailing aliment, standard of living, workout routines, anxiety, family, and line of business et al. However, the principal aspect that frequently gets ignored is the strength of the mind. Sound mind is the gateway to form / sustain an active and cheerful life. Your beliefs are exceptionally influential and can direct all phases of your life comprising your health. Most of us are only to some extent conscious of the reasonings that run through our mind.

70 Ways to Increase Your Brain Power 28. Creatine. This is a compound found in meat, used by athletes to help build muscle. Now the evidence is here to show that it helps your brain as well. Proceedings B , a journal published by the Royal Society reports that the research showed improvement in working memory and general intelligence resulting from creatine supplementation. Learned Helplessness The Misconception: If you are in a bad situation, you will do whatever you can do to escape it. The Truth: If you feel like you aren’t in control of your destiny, you will give up and accept whatever situation you are in. In 1965, a scientist named Martin Seligman started shocking dogs. He was trying to expand on the research of Pavlov – the guy who could make dogs salivate when they heard a bell ring. Seligman wanted to head in the other direction, and when he rang his bell instead of providing food he zapped them with electricity. To keep them still, he restrained them in a harness during the experiment.

5 Ways To Hack Your Brain Into Awesomeness Learn More While You Sleep So say you haven't followed that first step up there and choose to continue sleeping like other mere mortals. A very minor change in your schedule can still let you use your sleep patterns to your advantage, by making you smarter. Holy Shit, How Can I Do It? No, we're not talking about those scams where they have you put a tape recorder under your pillow and let it teach you Spanish while you're asleep. What scientists have found out is if you need to remember a bunch of information (say, for a big exam), do NOT study right up until time for the exam.

40 Photo-Illustrated Questions to Refocus Your Mind Asking the right questions is the answer… It’s not the answers you get from others that will help you, but the questions you ask of yourself. Here are 40 thought-provoking questions to help you refresh and refocus your thinking: Please share your thoughts with us in the comments section below. Also, check out our sister site, Thought Questions, for more photo-illustrated questions like these; and check out The Book of Questions if you’re interested in reading even more inspiring, thought-provoking questions.Title photo by: Helga Weber For all other photo credits please refer to ThoughtQuestions.com How to train your mind to remember anything Josha Foer observed the 2005 USA Memory Championship and won it in 2006He says you can teach yourself to remember a lot of information effectively One of the keys is to associate a word or a fact with other things you remember, Foer saysFoer: "If you want to make something memorable, you first have to make it meaningful" Editor's note: Joshua Foer is a writer and the author of "Moonwalking With Einstein: The Art and Science of Remembering Everything." In 2005, he attended the USA Memory Championship as an observer. After learning to train his memory using ancient techniques, he came back to the same contest a year later and won it. Foer spoke at the TED2012 conference in March.

The Dalai Lama’s 18 Rules For Living May 6, 2011 | 42 Comments » | Topics: Life, List At the start of the new millennium the Dalai Lama apparently issued eighteen rules for living. Since word travels slowly in the digital age these have only just reached me. Here they are. Just how powerful IS positive thinking? When people recover from illnesses against all odds ... should their claims that "positive thinking" made the difference constitute PROOF POSITIVE? Turns out, not even the "experts" entirely agree on that one. Our Cover Story this morning is from Rita Braver: Rookie New York Giants Mark Herzlich was on top of the world last weekend - starting for the very first time. But Two years ago, Herzlich was facing a much bigger challenge than winning a football game - he was diagnosed with bone cancer. "My doctor at the time had told me not only would I never play football again, I'd probably never be able to run again," Herzlich said.

5 Ways To Hack Your Brain Into Awesomeness Much of the brain is still mysterious to modern science, possibly because modern science itself is using brains to analyze it. There are probably secrets the brain simply doesn't want us to know. But by no means should that stop us from tinkering around in there, using somewhat questionable and possibly dangerous techniques to make our brains do what we want. We can't vouch for any of these, either their effectiveness or safety.

Mind-Controlled Musical Instrument Helps Paralysis Patients Rehabilitate Music Through the Mind Eduardo Miranda Paralysis patients could play music with their minds , using a new brain-control interface that senses brain impulses and translates them into musical notes. Users must teach themselves how to associate brain signals with specific tasks, causing neuronal activity that the brain scanners can pick up. Then they can make music. 70 Reminders to Help You Break Any Barrier I am pleased to introduce this guest article by a new friend John, the creator of HiLife2B, where he hopes to inspire people and to help them achieve their dreams. Follow him on Twitter: @janyasor 1. Believe that even the smallest compliment can save someone’s life