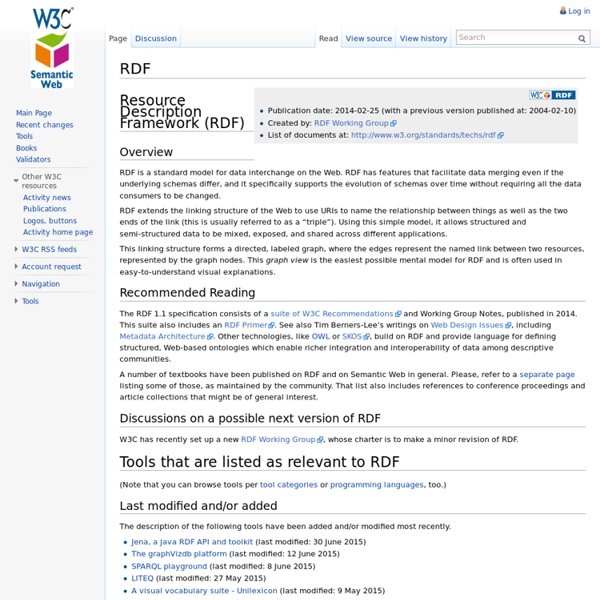 Overview RDF is a standard model for data interchange on the Web. RDF has features that facilitate data merging even if the underlying schemas differ, and it specifically supports the evolution of schemas over time without requiring all the data consumers to be changed. RDF extends the linking structure of the Web to use URIs to name the relationship between things as well as the two ends of the link (this is usually referred to as a “triple”). Using this simple model, it allows structured and semi-structured data to be mixed, exposed, and shared across different applications. This linking structure forms a directed, labeled graph, where the edges represent the named link between two resources, represented by the graph nodes. Recommended Reading The RDF 1.1 specification consists of a suite of W3C Recommendations and Working Group Notes, published in 2014. A number of textbooks have been published on RDF and on Semantic Web in general. Discussions on a possible next version of RDF

RDFS and Inferencing Resource Description Framework Schema (RDFS) extends RDF with simple organisational constructions. These help define concepts more explicitly and also allow for inferences to be generated with a reasoning engine. Classes and Subclasses An rdfs:Class is a set of elements — it is an organisational construct rather than a tangible object. RDFa 1.1 Distiller and Parser Warning: This version implements RDFa 1.1 Core, including the handling of the Role Attribute. The distiller can also run in XHTML+RDFa 1.0 mode (if the incoming XHTML content uses the RDFa 1.0 DTD and/or sets the version attribute). The package available for download, although it may be slightly out of sync with the code running this service. If you intend to use this service regularly on large scale, consider downloading the package and use it locally. Storing a (conceptually) “cached” version of the generated RDF, instead of referring to the live service, might also be an alternative to consider in trying to avoid overloading this server… What is it?

Triplestore Much like a relational database, one stores information in a triplestore and retrieves it via a query language. Unlike a relational database, a triplestore is optimized for the storage and retrieval of triples. In addition to queries, triples can usually be imported/exported using Resource Description Framework (RDF) and other formats. OWL The OWL Web Ontology Language is designed for use by applications that need to process the content of information instead of just presenting information to humans. OWL facilitates greater machine interpretability of Web content than that supported by XML, RDF, and RDF Schema (RDF-S) by providing additional expressive power along with a formal semantics. The group's work is complete with the publication of OWL 2 (Second Edition). There may be new Errata and discussion on public-owl-dev@w3.org. Second Edition Deliverables

RDF and JSON: A Clash of Model and Syntax – Lost Boy I had been meaning to write this post for some time. After reading Jeni Tennison’s post from earlier this week I had decided that I didn’t need too, but Jeni and Thomas Roessler suggested I publish my thoughts. So here they are. I’ve got more things to say about where efforts should be expended in meeting the challenges that face us over the next period of growth of the semantic web, but I’ll keep those for future posts. Everyone agrees that a JSON serialization of RDF is a Good Thing. And I think nearly everyone would agree that a standard JSON serialization of RDF would be even better.

Resource Description Framework (RDF) Schema Specification 1.0 W3C Candidate Recommendation 27 March 2000 This Version: Latest Version: Previous Version: Editors: Cytoscape: Hands-down Winner for Large-scale Graph Visualization I still never cease to be amazed at how wonderful and powerful tools are so often and easily overlooked. The most recent example is Cytoscape, a winner in our recent review of more than 25 tools for large-scale RDF graph visualization. We began this review because the UMBEL subject concept “backbone” ontology will involve literally thousands of concepts. Graph visualization software suitable to very large graphs would aid UMBEL’s construction and refinement.

SKOS Simple Knowledge Organization System - home page SKOS is an area of work developing specifications and standards to support the use of knowledge organization systems (KOS) such as thesauri, classification schemes, subject heading lists and taxonomies within the framework of the Semantic Web ... [read more] Alignment between SKOS and new ISO 25964 thesaurus standard (2012-12-13) ISO 25964-1, published in 2011, replaced the previous thesaurus standards ISO 2788 and ISO 5964 (both now withdrawn). Members of the Working Group responsible for ISO 25964 have gone on to consider the implications for SKOS users.

Welcome to the OpenUp Data Enrichment Service OpenUp Client The OpenUp Client allows you to access DES functionality from any web page you are browsing. Simply drag the bookmarklet link below onto your toolbar and click on it when you want to know more! It's still experimental so there may be the odd glitch! Cross-Origin Resource Sharing (CORS) The client makes use of CORS, allowing data to be posted to the DES. Uniform resource locator A uniform resource locator, abbreviated as URL (also known as web address, particularly when used with HTTP), is a specific character string that constitutes a reference to a resource. In most web browsers, the URL of a web page is displayed on top inside an address bar. An example of a typical URL would be " A URL is technically a type of uniform resource identifier (URI), but in many technical documents and verbal discussions, URL is often used as a synonym for URI, and this is not considered a problem.[1] URLs are commonly used for web pages (http), but can also be used for file transfer (ftp), email (mailto) and many other applications (see URI scheme for list). URLs are specified in RFC 3986 (2005), and in a WHATWG URL Living Standard.[2] History[edit]

Uniform resource identifier Relationship to URL and URN[edit] URIs can be classified as locators (URLs), as names (URNs), or as both. A uniform resource name (URN) functions like a person's name, while a uniform resource locator (URL) resembles that person's street address. In other words: the URN defines an item's identity, while the URL provides a method for finding it. URLs and URNs[edit] A URL is a URI that, in addition to identifying a web resource, specifies the means of acting upon or obtaining the representation: providing both the primary access mechanism, and the network "location".

À propos de data.bnf.fr (data.bnf.fr) Current Version This site, which has been available online since July 2011, is continuously being developed and undergoes regular updates. The version currently displayed is Version [1.3] of data.bnf.fr, posted online on 2014/03/25.