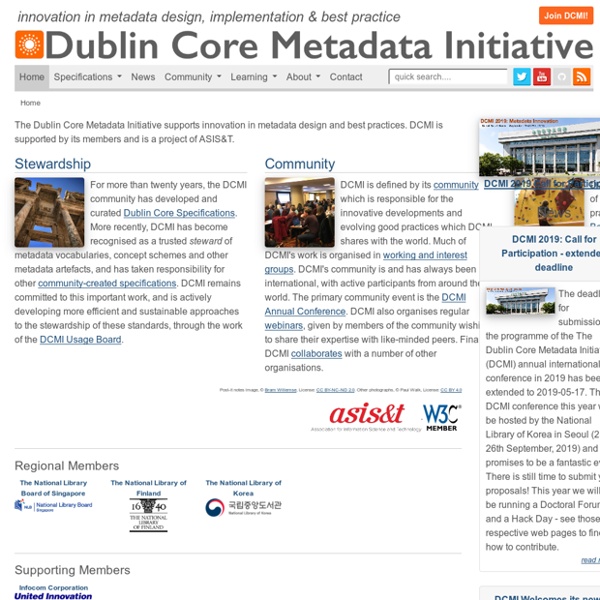 SPARQL 1.1 Protocol 4.1 Security There are at least two possible sources of denial-of-service attacks against SPARQL protocol services. First, under-constrained queries can result in very large numbers of results, which may require large expenditures of computing resources to process, assemble, or return. Another possible source are queries containing very complex — either because of resource size, the number of resources to be retrieved, or a combination of size and number — RDF Dataset descriptions, which the service may be unable to assemble without significant expenditure of resources, including bandwidth, CPU, or secondary storage. In some cases such expenditures may effectively constitute a denial-of-service attack. A SPARQL protocol service may place restrictions on the resources that it retrieves or on the rate at which external resources are retrieved.

DCMI Metadata Terms This document is an up-to-date, authoritative specification of all metadata terms maintained by the Dublin Core Metadata Initiative. Included are the fifteen terms of the Dublin Core Metadata Element Set, which have also been published as IETF RFC 5013 [RFC5013], ANSI/NISO Standard Z39.85-2007 [NISOZ3985], and ISO Standard 15836:2009 [ISO15836]. Each term is specified with the following minimal set of attributes: Where applicable, the following attributes provide additional information about a term: This release of DCMI Metadata Terms reflects changes described more fully in the document "Maintenance changes to DCMI Metadata Terms" [REVISIONS].

Science The more we understand about science and its complexities, the more important it is for scientific data to be shared openly. It’s not useful to have ten different labs doing the same research and not sharing their results; likewise, we’re much more likely to be able to pinpoint diseases if we have genomic data from a large pool of individuals. Since 2004, we’ve been focusing our efforts to expand the use of Creative Commons licenses to scientific and technical research. Science Advisory Board Semantic Web Case Studies Case studies include descriptions of systems that have been deployed within an organization, and are now being used within a production environment. Use cases include examples where an organization has built a prototype system, but it is not currently being used by business functions. The list is updated regularly, as new entries are submitted to W3C. There is also an RSS1.0 feed that you can use to keep track of new submissions.

Make Your Products 'POP!' On Social Media & SERPs with Microdata! Get More Visits from Social Media when Someone Shares Your Products The biggest validation for your store is when a customer shares your products on social media. What they’re saying is: “Hey, I had a great experience buying from these guys. If This Then That (IFTTT): Connecting the Web One Recipe at a Time If This Then That (IFTTT) is a service software that lets the Internet do your work for you by connecting major sites across the web, such as Gmail, Dropbox, Facebook, Evernote, and more. The way IFTTT works is by taking a trigger (if this) and connecting it to an action (then that) on another site. This is known as a personal recipe. Here are some examples: When you add a new photo on Instagram, a photo file is added to Dropbox.Every time it is threatening to rain, receive a text message.When the temperature reaches 80 degrees, turn the fan on at home (to keep the dog cool!)