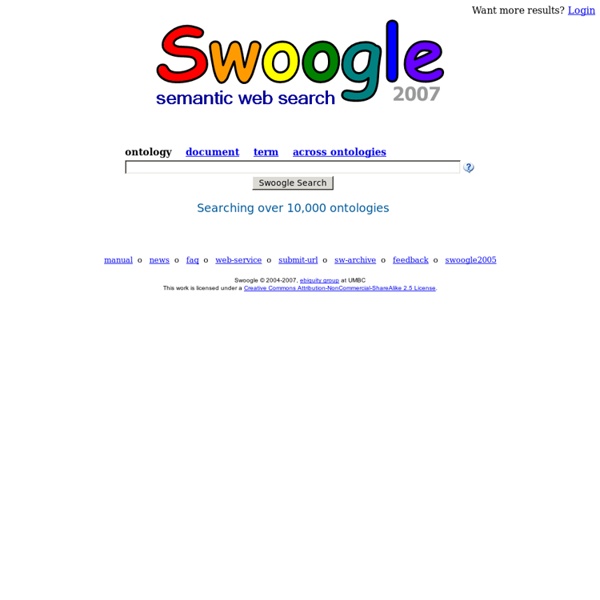 Sears: Appliances, Tools, Electronics, Apparel and more from Craftsman, Kenmore, Diehard and other Leading Brands Watson Semantic Web Search This is the Watson Web interface for searching ontologies and semantic documents using keywords. This interface is subject to frequent evolutions and improvements. If you want to share your opinion, suggest improvement or comment on the results, don't hesitate to contact us... eDonkey network The eDonkey Network (also known as the eDonkey2000 network or eD2k) is a decentralized, mostly server-based, peer-to-peer file sharing network best suited to share big files among users, and to provide long term availability of files. Like most sharing networks, it is decentralized, as there is not any central hub for the network; also, files are not stored on a central server but are exchanged directly between users based on the peer-to-peer principle. Currently, the eD2k network is not supported by any organization (in the past it was supported by the MetaMachine Corporation, its creator, which now is out of business) and development and maintenance is being fully provided by its community and client developers.

Watson Semantic Web Search This is the Watson Web interface for searching ontologies and semantic documents using keywords. This interface is subject to frequent evolutions and improvements. If you want to share your opinion, suggest improvement or comment on the results, don't hesitate to contact us... At the moment, you can enter a set of keywords (e.g.

W3C List This page collects links to Semantic Web Search Engines. Semantic Web Search Engines use robots to crawl RDF data from the Web and provide search and navigation facilities over crawled data. The page is part of the community project SweoIG/TaskForces/CommunityProjects/LinkingOpenData Echoes - Real-time Topic Homepage Mashup Onswipe Imagine waiting for the train while picking out your groceries from a display case filled with products identical in size, scale and color to really grocery store shelves. If the first round of the digital revolution was about making the real virtual, this time it is about making the virtual real again. South Korean grocery chain Tesco was looking for a way to one-up their major competitor – impossible to do in terms of physical shops due to a lack of actual stores; hence, they turned toward the world wide web with a combination of mobile phone and QR code technologies. Using smartphones, shoppers can browse the isles during time normally spent idle anyway on their way to or from work. Their purchased products are then delivered by the store, waiting for them when they get home and ready to be put right into the kitchen cabinets, refrigerator or freezer.

How to publish Linked Data on the Web This document provides a tutorial on how to publish Linked Data on the Web. After a general overview of the concept of Linked Data, we describe several practical recipes for publishing information as Linked Data on the Web. This tutorial has been superseeded by the book Linked Data: Evolving the Web into a Global Data Space written by Tom Heath and Christian Bizer. This tutorial was published in 2007 and is still online for historical reasons. Social Media App Lets You Live Vicariously Through Friends' Experiences Vycarious, a new social-media app that is available for iOS, lets you create, follow and comment on friends' experiences, ranging from a two-week vacation to handcrafting a dinner table. To start, users create an "experience description," such as "cooking Pad Thai." They then choose a photo or video as the lead image, denote a starting date and time, and include hashtags to make their experience searchable. After that, users can upload posts, videos, images and other media until their experience ends. However, friends can still write comments even after users hit the end button to signal that their experience is over. "There just really isn't a way to share an entire experience [on social media]," Rosalie Bartlett, co-founder and CEO of Vycarious, told Mashable. " With Twitter, it's tiny, tiny snippets.

The 101 Most Useful Websites on the Internet Here are the most useful websites on the Internet that will make you smarter, increase productivity and help you learn new skills. These incredibly useful websites solve at least one problem really well. And they all have cool URLs that are easy to memorize thus saving you a trip to Google. Trans-Atlantic Bandwidth Crunch coming During the dot-com boom, so many undersea cable delivering the Internet traversed the bottom of the ocean between the U.S. and Europe that bandwidth prices plummeted and providers of submarine cables filed for bankruptcy. But those cables may soon no longer be enough to satisfy the global demand for bandwidth between the two continents, according to research out today from TeleGeography. The research firm estimates that bandwidth requirements will grow 33 percent between 2008 and 2015, and trans-Atlantic capacity will be exhausted by 2014.