URI, Adressing, Distributed hashes, Watermarks and such. The Semantic Web: Where is it now? – Rashif “Ray” Rahman. Although there is no Gartner report to show for it, the period 2006 to 2010 marks the most exciting time yet for semantic (web) technologies. 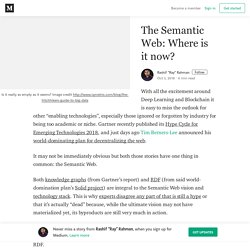 Peak of inflated expectations of the vision, perhaps? Freebase was in full swing, and would later go on to be acquired by Google and become the foundation for its very own proprietary Knowledge Graph. SPARQL v1.1,OWL v2 and SPIN were introduced to provide much needed RDF querying flexibility, ontology intelligence and reasoning capabilities. Tutorial 3: Semantic Modeling. Next: Introducing RDFS & OWL Whilst RDF offers a flexible, graph-based model for recording data that is interchangable globally, it doesn't offer any means to record semantics or meaning. 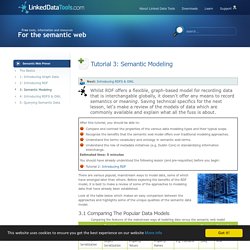 Saving technical specifics for the next lesson, let's make a review of the models of data which are commonly available and explain what all the fuss is about. After this tutorial, you should be able to: Compare and contrast the properties of the various data modeling types and their typical scope.Recognise the benefits that the semantic web model offers over traditional modeling approaches.Understand the terms vocabulary and ontology in semantic web terms.Understand the role of metadata initiatives (e.g.

Dublin Core) in standardizing information interchange.Estimated time: 5 minutes You should have already understood the following lesson (and pre-requisites) before you begin: Tutorial 2: Introducing RDF There are various popular, mainstream ways to model data, some of which have emerged later than others. Turtle (syntax) Turtle (Terse RDF Triple Language) is a format for expressing data in the Resource Description Framework (RDF) data model with the syntax similar to SPARQL. RDF, in turn, represents information using "triples", each of which consists of a subject, a predicate, and an object. Each of those items is expressed as a Web URI. Turtle provides a way to group three URIs to make a triple, and provides ways to abbreviate such information, for example by factoring out common portions of URIs.

Notation 3 Logic. Up to Design Issues An RDF language for the Semantic Web This article gives an operational semantics for Notation3 (N3) and some RDF properties for expressing logic. 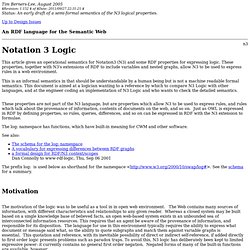 These properties, together with N3's extensions of RDF to include variables and nested graphs, allow N3 to be used to express rules in a web environment. This is an informal semantics in that should be understandable by a human being but is not a machine readable formal semantics. RDF/XML. RDFa 1.1 Distiller and Parser. Warning: This version implements RDFa 1.1 Core, including the handling of the Role Attribute. 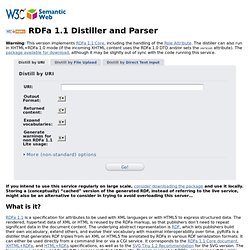 The distiller can also run in XHTML+RDFa 1.0 mode (if the incoming XHTML content uses the RDFa 1.0 DTD and/or sets the version attribute). The package available for download, although it may be slightly out of sync with the code running this service. If you intend to use this service regularly on large scale, consider downloading the package and use it locally. Storing a (conceptually) “cached” version of the generated RDF, instead of referring to the live service, might also be an alternative to consider in trying to avoid overloading this server… What is it?

RDFa 1.1 is a specification for attributes to be used with XML languages or with HTML5 to express structured data. As installed, this service is a server-side implementation of RDFa. Distiller options Output format (option: format; values: turtle, xml, json, nt; default: turtle) The default output format is Turtle. Text/html: RDF - Semantic Web Standards. Overview RDF is a standard model for data interchange on the Web. 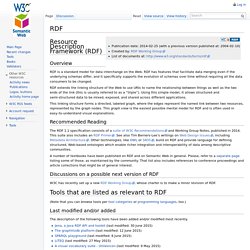 RDF has features that facilitate data merging even if the underlying schemas differ, and it specifically supports the evolution of schemas over time without requiring all the data consumers to be changed. RDF extends the linking structure of the Web to use URIs to name the relationship between things as well as the two ends of the link (this is usually referred to as a “triple”). Using this simple model, it allows structured and semi-structured data to be mixed, exposed, and shared across different applications. This linking structure forms a directed, labeled graph, where the edges represent the named link between two resources, represented by the graph nodes. Recommended Reading The RDF 1.1 specification consists of a suite of W3C Recommendations and Working Group Notes, published in 2014. A number of textbooks have been published on RDF and on Semantic Web in general. Resource Description Framework (RDF) Schema Specification 1.0. W3C Candidate Recommendation 27 March 2000. 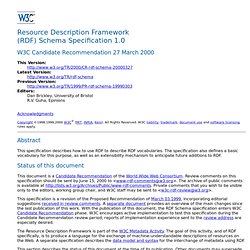 Resource Description Framework (RDF) Uniform resource locator. Uniform resource identifier. Relationship to URL and URN[edit] URIs can be classified as locators (URLs), as names (URNs), or as both. 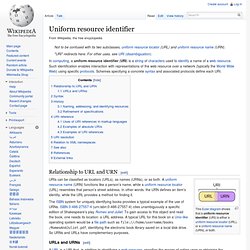 A uniform resource name (URN) functions like a person's name, while a uniform resource locator (URL) resembles that person's street address. In other words: the URN defines an item's identity, while the URL provides a method for finding it. URLs and URNs[edit]