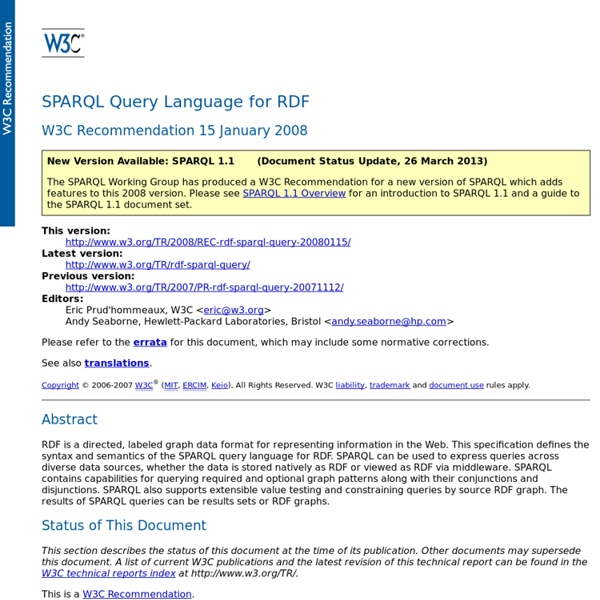 W3C Recommendation 15 January 2008 New Version Available: SPARQL 1.1 (Document Status Update, 26 March 2013) The SPARQL Working Group has produced a W3C Recommendation for a new version of SPARQL which adds features to this 2008 version. Please see SPARQL 1.1 Overview for an introduction to SPARQL 1.1 and a guide to the SPARQL 1.1 document set. This version: Latest version: Previous version: Editors: Eric Prud'hommeaux, W3C <eric@w3.org> Andy Seaborne, Hewlett-Packard Laboratories, Bristol <andy.seaborne@hp.com> Please refer to the errata for this document, which may include some normative corrections. See also translations. Copyright © 2006-2007 W3C® (MIT, ERCIM, Keio), All Rights Reserved. Abstract RDF is a directed, labeled graph data format for representing information in the Web. Status of This Document This section describes the status of this document at the time of its publication. This is a W3C Recommendation. Appendices 1 Introduction 1.1 Document Outline 1.2 Document Conventions Data: Query: ?

SPARQL vs. SQL - Intro This lesson compares the SPARQL and SQL query languages, which are designed to query RDF and relational data, respectively. You may be reading this lesson because you know one and want to learn the other or because you need to make some decisions about which to use for some purpose. First, let's look at their data models; that is, the way we consider their data to be structured. Comparing RDF and SQL data Many people ask what can be done with SPARQL that can't be done with SQL, when in fact they care about what can be done in RDF that can't be done with relational databases. Both of these languages give the user access to create, combine, and consume structured data. Free Geolocation Database New Database Format Available: This page is for our legacy databases. For our latest database format, please see our GeoLite2 Databases. Databases IP Geolocation The GeoLite databases are our free IP geolocation databases.

SWRL: A Semantic Web Rule Language Combining OWL and RuleML W3C Member Submission 21 May 2004 This version: Latest version: Authors: Ian Horrocks, Network Inference Peter F. Patel-Schneider, Bell Labs Research, Lucent TechnologiesHarold Boley, National Research Council of CanadaSaid Tabet, Macgregor, Inc.Benjamin Grosof, Sloan School of Management, MITMike Dean, BBN Technologies How British do you feel? Visualised Visualising data online and in a newspaper is like the difference between speaking Spanish and conversing in French; there have the same roots and are ostensibly similar - but in practice are completely different. So it's proven with the results of our online Britishness survey, where we asked readers to rate how they felt about their nationality. The results provide a fascinating insight into how different parts of the UK really feel about the nation as a whole. Online, it works just like a Google map - where you can zoom in and see how people feel in each place, ranked by the maps of each country. It works using the Google Maps API, feeding from a spreadsheet form that readers are essentially filling in.

The Semantic Web: An Introduction This document is designed as being a simple but comprehensive introductory publication for anybody trying to get into the Semantic Web: from beginners through to long time hackers. Recommended pre-reading: the Semantic Web in Breadth. Table Of Contents What Is The Semantic Web? Open Linked Data Discovery, Proof and Trust I have been giving more and more thought lately about the top two layers of the semantic web "layer cake" – "proof," and above it, "trust." The lower layers receive a lot of attention – RDF (and other data structures), OWL (and ontologies in general), SPARQL, URIs, and so forth – but trust and proof haven't been, I think, explored with the same depth as other aspects of the semantic web. I came to wondering, what if those underlying lower layers came together? What if there was widespread adoption of these technologies, and heaps of well-structured, properly-linked data became available? In this sea of linked data, wouldn't there be some resources that deliberately misrepresented their origin, the data they provided, or both?

Royal Society journal archive made permanently free to access 26 October 2011 Around 60,000 historical scientific papers are accessible via a fully searchable online archive, with papers published more than 70 years ago now becoming freely available. The Royal Society is the world’s oldest scientific publisher, with the first edition of Philosophical Transactions of the Royal Society appearing in 1665. Henry Oldenburg – Secretary of the Royal Society and first Editor of the publication – ensured that it was “licensed by the council of the society, being first reviewed by some of the members of the same”, thus making it the first ever peer-reviewed journal. Philosophical Transactions had to overcome early setbacks including plague, the Great Fire of London and even the imprisonment of Oldenburg, but against the odds the publication survived to the present day. Its foundation would eventually be recognised as one of the most pivotal moments of the scientific revolution.

How Best Buy is Using The Semantic Web Yesterday we wrote about the increasing usage of Semantic Web technologies by large commercial companies like Facebook, Google and Best Buy. The Semantic Web is a Web of added meaning, which ultimately enables smarter and more personalized web apps to be built. In this post we explore how a leading U.S. retailer, Best Buy, is using a Semantic Web markup language called RDFa to add semantics to its webpages. This is not just an academic exercise for Best Buy. As we will see, semantic technology has already led to increased traffic and better service to its customers. We spoke to Jay Myers, Lead Web Development Engineer at BestBuy.com, to find out how.

Cool Infographics - Cool Posters A collection of great infographic posters from around the world. Click the image to be taken to the poster site to view details and order yourself a copy. Purchasing posters through these links will help support Cool Infographics on most of the posters below. Thank you! A Visual Compendium of Cameras A meticulously illustrated catalog of 100 landmark cameras, culled from over a century of photographic history, depicting both professional and consumer models and tracing photography’s history from the first models to today’s digital wonders. Case Study: CRUZAR — An application of semantic matchmaking for eTourism in the city of Zaragoza Maria Jesús Fernández, City Council of Zaragoza and Antonio Campos, CTIC Foundation, Spain August 2008 General Description The web is a big showcase for cities that want to build their tourism industry. Nowadays, many tourists plan their trips in advance using the information that is available on web pages. Cities compete against each other to offer the most attractive and complete information and services through the tourism section of their web sites.