ThoughtWorks University: Retrospective Coherence at Mark Needham. I recently came across Joseph Pelrine’s blog post where he describes the way that you might go about organising a great party. 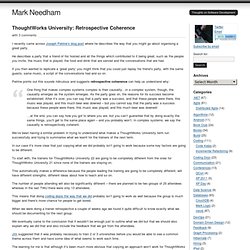 He describes a party that a friend of his hosted and all the things which contributed to it being great, such as the people you invite, the music that is played, the food and drink that are served and the conversations that are had. If you then wanted to replicate a ‘great party’ you might think that you could just replay his friend’s party, with the same guests, same music, a script of the conversations had and so on. Pelrine points out this sounds ridiculous and suggests retrospective coherence can help us understand why: One thing that makes complex systems complex is their causality…in a complex system, though, the causality emerges as the system emerges. As the party goes on, the reasons for its success become established.

Education Reform – A Wicked Problem « Iterations. Why is it so difficult to change the way we educate our children? 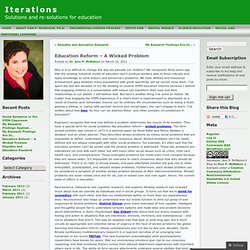 We recognized thirty years ago that the existing industrial model of education won’t produce workers able to think critically and apply knowledge to solve today’s and tomorrow’s problems. COMMUNITY CAPACITY BUILDING. From the President... 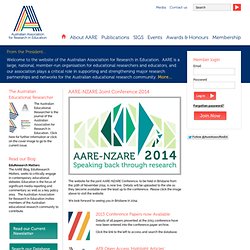 Welcome to the website of the Australian Association for Research in Education. AARE is a large, national, member-run organisation for educational researchers and educators, and our association plays a critical role in supporting and strengthening major research partnerships and networks for the Australian educational research community. More... AARE-NZARE Joint Conference 2014. Education in Singapore : special needs. Feedback on article Education for children (of typical school-going ages) with disabilities is managed by voluntary welfare organisations (VWOs). 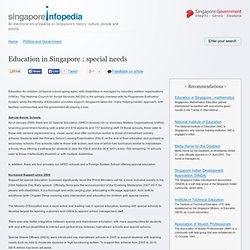 The National Council for Social Services (NCSS) is the primary overseer with its Programme Evaluation System, while the Ministry of Education provides support. Singapore takes the “many helping hands” approach, with families, communities and the government all playing a role. Special Needs SchoolsAs of January 2009, there are 20 Special Education (SPED) schools run by Voluntary Welfare Organisations (VWOs) receiving government funding, with a total of 4,619 students and 737 teaching staff. Of these schools, three cater to those with sensory impairment (e.g. visual, aural) and offer curriculum similar to those of mainstream primary schools.

In addition, there are four privately run SPED schools and a Foreign System School offering special education. Government SupportPolitically, the 1950s were turbulent times in Singapore. Leadership and emotional intelligence: A decade of discovery and key questions for HR directors. Martyn Newman , 27 Jan 2012 When Paul Ekman, a prominent emotions researcher, first travelled to the highlands of Papua New Guinea a few decades ago to study emotions in tribes people he could not have imagined the revolution in psychology – and the impact on the workplace - that this would spark. 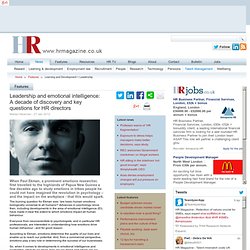 The burning question for Ekman was: 'are basic human emotions biologically universal to all humans? ' Leadership and the Emotional Edge. By Pat Schally Leaders possessing a high degree of Emotional Intelligence (EI) lead the way to greater influence in relationships, adaption to change, management of conflict, effective negotiation and cultural sensitivity. 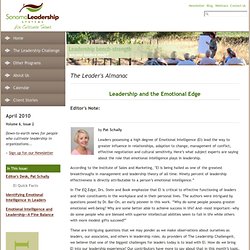 Here’s what subject experts are saying about the role that emotional intelligence plays in leadership. 4 Steps to Building an Emotionally Intelligent Culture. In an article last week, I discussed Five Reasons Why Emotional Intelligence (EI) Workshops Fail. 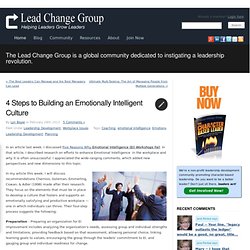 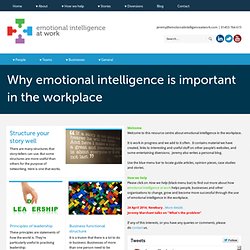 It is work in progress and we add to it often. It contains material we have created, links to interesting and useful stuff on other people’s websites, and some entertaining diversions. Jeremy also writes a personal blog. Use the blue menu bar to locate guide articles, opinion pieces, case studies and stories. How we help Please click on How we help (black menu bar) to find out more about how emotional intelligence at work helps people, businesses and other organisations to change, grow and become more successful through the use of emotional intelligence in the workplace. 24 April 2014, Newbury . Emotional Intelligence and Cultural Competency: Inclusion Leadership « leonormccallrodriguez.

GlobalLeadership%2011206. Intellectual Leaders. First described by Burns in 1978, intellectual leaders were one of the four types of transformational leaders documented. 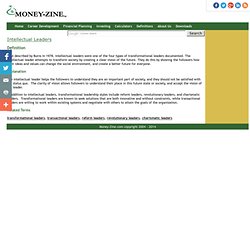 The intellectual leader attempts to transform society by creating a clear vision of the future. They do this by showing the followers how their ideas and values can change the social environment, and create a better future for everyone. Explanation The intellectual leader helps the followers to understand they are an important part of society, and they should not be satisfied with the status quo. The clarity of vision allows followers to understand their place in this future state or society, and accept the vision of the leader. Are Teachers Really Leaders in Disguise? Research has clearly told us the leadership qualities and behaviors that are most effective. 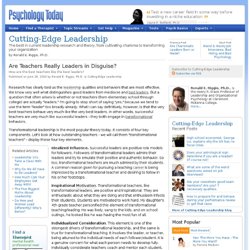 MLI%20Impact%202012. Greenlee_0705. Teacher - Responsibilities of Elementary and Secondary School Teachers, Qualifications of Elementary and Secondary Teachers - Education, Students, National, and Public. The role and responsibilities of elementary and secondary school teachers have undergone a significant evolution since the publication of the first edition of the Encyclopedia of Education. Historically, teachers have been viewed as purveyors of content knowledge and academic skills, but teachers in the early twenty-first century have also become ambassadors to multicultural communities and promulgators of democracy. As expectations for teacher performance have increased, so too has the status of teaching–the term teaching profession has become commonplace.

Conventionally viewed as dispensers of knowledge, teachers are increasingly perceived as facilitators or managers of knowledge. They are often thought to be colearners with their students. Few modern teachers would try to claim intellectual hegemony in the classroom; such a claim would not stand the challenge of increasingly sophisticated students. Responsibilities of Elementary and Secondary School Teachers. Ncsm_april2011. Introduction - New Learning: A Charter for Change in Education.

At worst, education is a low paying, low status profession. In Universities, Education is a fragmented discipline area, assuming a professional service role more often than it does a leading intellectual role. One simple metric for the overall social value placed upon education as a profession and an area of social development is the miniscule amounts spent on R&D—an estimated 0.25% of education budgets, compared to 5 to 15 percent for engineering and medicine.156 As a profession, education is in need of major transformation.

Some of the transformation is in employment conditions, including pay rates and greater opportunities for working flexible hours (more or less than the conventional working week). Action Items Action Item 3.1: Improve the Quality of Working Life of Teaching and Enhance the Rewards of Teaching Develop a Professional Pedagogue Program, to reconceive and redesign the job of teaching. Action Item 3.2: Build Educational R&D into Every School Supporting Evidence. Strategic Leadership - Definition and Qualities of a Strategic Leader. Leadership: 4 Traits of Incredibly Effective Delegators. Before opening my business, I worked for a lot of companies--big and small, corporate and family run, traditional and innovative. I encountered many types of managers, and I learned that those who managed best were those who allowed staff members to think boldly, to move swiftly, and to do so with a game plan rather than a rulebook.

When it came time to open Metal Mafia, I knew that I wanted my company to be a place that valued motivation and maverick thinking over micromanagement. The only way to make that happen was to be willing to delegate, and as a business owner, giving up control sometimes was scary. To beat back fear in favor of freedom, here's how to comfortably delegate: Establish checkpoints. The New Psychology of Strategic Leadership.

The Idea in Brief Firms typically cluster around a few strategic positions, leaving others unoccupied. The intense competition on those occupied mountaintops makes it hard for firms to gain attractive returns. Why Flexible Interpretation is Key in Strategic Thinking. Uncertainty can be scary – but what is even scarier is how insidious the human mind can be in the face of uncertainty. The Three Strengths Of A True Strategic Leader - Forbes.com. 6 Habits of True Strategic Thinkers.