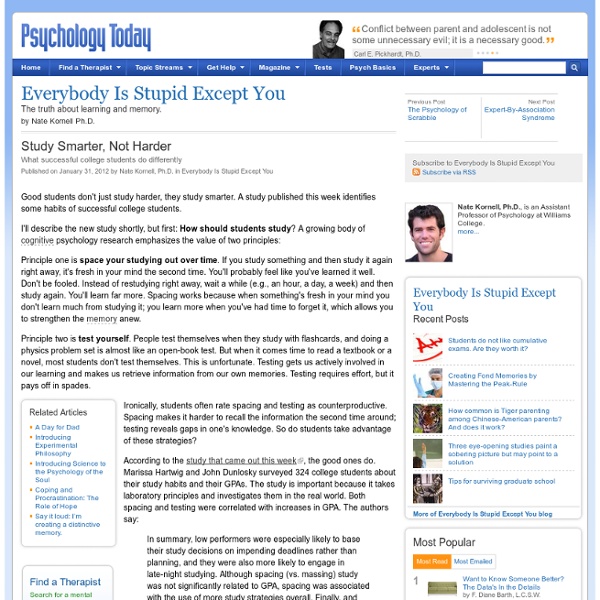 Good students don't just study harder, they study smarter. A study published this week identifies some habits of successful college students. I'll describe the new study shortly, but first: How should students study ? A growing body of cognitive psychology research emphasizes the value of two principles: Principle one is space your studying out over time . Principle two is test yourself . Ironically, students often rate spacing and testing as counterproductive. According to the study that came out this week , the good ones do. In summary, low performers were especially likely to base their study decisions on impending deadlines rather than planning, and they were also more likely to engage in late-night studying. Why spacing wasn't significantly related to GPA isn't clear. It's always important to remember that correlation doesn't equal causation. College isn't all about grades, it's really about learning.

Bjork Learning and Forgetting Lab - Research Applying Cognitive Psychology to Enhance Educational Practice The primary goal of this research, which is funded by the James S. McDonnell foundation, is to promote learning and memory performance within educational contexts through the investigation of principles in cognitive psychology. The overlying theme of "desirable difficulties," first introduced by Robert Bjork (1994), is also explored through manipulations in the spacing of learning events and the study schedule produced by interleaving various to-be-learned items, such as English-Swahili translated word pairs or prose materials. Studies have also looked at the effectiveness of similar choices used in multiple choice tests for future test performance as well as the act of generating items when they are presented with missing letters. This line of work is also directed toward understanding the mechanisms behind metacognitive awareness of learning. I. In recent years, we have explored this phenomenon in a variety of ways. II. R.

Smarts: Four things worth learning about learning {*style:<b>Read. Recall. Write. </b>*} Experiments show that the way most of us try to learn new material is inefficient. We read and reread a passage until we think we understand it. {*style:<b>Do it forward and backward </b>*}I usually hike through a forest preserve in a clockwise direction. {*style:<b>Test, Retest </b>*}People often study as subject until they can get 100% right on a test of their understanding of the subject. Even more generally, good intentions alone are not enough. {*style:<b>Get to the theory behind the fact </b>*}Many people have a self-imposed learning disability : They focus on "just the facts." Understanding the principle of compounding allows you to see that a very small change in the interest rate makes a huge difference over time and that when paying off a debt or saving money, a small change in the amount you add or subtract each month makes an enormous difference - pennies - in how quickly you reach your goal.

Simple Ways To Study Better Knowledge is the essence of smart thinking. No matter how much raw intelligence you have, you are not going to succeed at solving complex problems without knowing a lot. That's why we spend the first 20 (or more) years of our lives in school. Robert Bjork and fellow PT blogger Nate Kornell have explored some of the study habits of college students in a 2007 paper in Psychonomic Bulletin & Review . Of course, guidelines from memory research come from studies in idealized circumstances. To address this question, Marissa Hartwig and John Dunlosky related the study habits of college students to their grade point average (GPA) in a 2012 paper in Psychonomic Bulletin & Review . The students with the highest GPA were more likely to study by testing themselves than the students with lower GPAs. All college students tend to focus their study on upcoming assignments. Finally, the time of day that students study also matters.

Surviving Tough Times Dick Marcinko, author of and other books about the Navy Seals and related topics, says that when he is looking for tough men for his units, he looks for warthogs, not gazelles. A gazelle is fast, lovely, and elegant. Warthogs are ugly and slow. To Marcencko, a gazelle is someone who does things effortlessly and well. They're smart and talented. Because they've never to dig deep, they don't know how to do it. To get into Seal Team 6, you go through days of grueling, hard grunt labor. The Navy Seals swim - one of their primary missions is underwater reconnaissance They got to one point in the testing where the men were supposed to grab two buckets full of rocks and swim across the pool with them. Some of them did - those guys made the team. One guy grabbed the buckets, jumped in the pool, and started running. The drill instructor snarled at him in disgust: "What the f**k is wrong with you a*****e?!" "I can't swim!" He made the team. That's what warthogs have: grit. Those kids are warthogs.

We're Only Human...: The Science of Cramming I went to a very nerdy college. This school was so nerdy that the “mascot” was an engineer, and at football games students would chant: “Tangent, secant, cosine, sine. Three point one four one five nine. Go Engineers!” I'm not kidding. So how is it possible that today I do not even know what a secant is? Was I studying the wrong way during all those wee hours? Consider “overlearning.” University of South Florida psychologist Doug Rohrer decided to explore this question scientifically. The results were interesting. Rohrer and Pashler also wanted to see if the scheduling of study breaks might make a difference in learning. All these experiments involved rote learning, but Rohrer and Pashler have also found similar effects with more abstract learning, like math. All we were taught about study skills at my nerdy school was to keep a clean, well-lit work space and eat a good breakfast, and most of us ignored that advice.

Introduction to accelerated learning: 3. Review and recall Learning cannot take place without memory, and we expect our students to be able to process, synthesise and recall a vast amount of information every day. There are, however, some simple strategies that we can employ to help them to do this. Firstly consider the natural concentration span. A rough guide is that concentration span in minutes is equivalent to chronological age in years, +/− 2 minutes. That means that even our most attentive 18 year olds need a short concentration break every 15–20 minutes. So when planning lessons, think about providing a brief break or change of focus or activity every 15 minutes or so. Beginnings and endings of lessons are vital times in terms of review and recall. Reviewing information is also vitally important for longer-term recall. Review a lesson you have recently taught which involved a long activity.

Think You Know How To Study? Think Again Meat Eaters Downplay Animal Minds The decision about whether to eat meat has a moral dimension to it. The animals that we use for food are complex creatures. Deciding to eat them means accepting that they will be killed so that you can eat them. That is not to say, of course, that people grapple with this decision at every meal, but in some way everyone has to make some decision about whether to eat animals. And before I go any further with this discussion, I should mention that I have been a vegetarian for about 10 years now for a combination of economic, health, and moral reasons. An interesting question about eating meat involves how people grapple with the issue that many animals people eat are reasonably intelligent creatures. In one simple study, the researchers asked (meat-eating) participants to rate how willing they were to eat a variety of animals ranging from houseflies, to fish, to chicken to elephants to gorillas. It isn't just thinking about animals being used for food, though.

Study skills Study skills or study strategies are approaches applied to learning. They are generally critical to success in school,[1] considered essential for acquiring good grades, and useful for learning throughout one's life. There are an array of study skills, which may tackle the process of organizing and taking in new information, retaining information, or dealing with assessments. While often left up to the student and their support network, study skills are increasingly taught in High School and at the University level. More broadly, any skill which boosts a person's ability to study and pass exams can be termed a study skill, and this could include time management and motivational techniques. Study skills are discrete techniques that can be learned, usually in a short time, and applied to all or most fields of study. Historical context[edit] The term study skills is used for general approaches to learning, skills for specific courses of study. Types[edit] Methods based on visual imagery[edit]

10 Tips to Study Smart and Save Time I recently got my marks back from University. My grade point average was a 4.2 out of a possible 4.5, resting between an A and a perfect A+. In itself, this isn’t an incredible achievement. Is it just natural talent? This strategy of organization I label holistic learning. Learning is a process similar to building a house. You are fed building supplies, bricks, mortar and glass. Memorization – Instead of building anything you simply stare at each brick for several minutes trying to record its position. There is nothing particularly wrong with either of these strategies, assuming they aren’t your entire strategy. Learning Holistically The alternative strategy is to focus on actually using the information you have to build something. Metaphor – Metaphors can allow you to quickly organize information by comparing a complex idea to a simple one.

Why Do Depressed People Lie in Bed? If you've personally suffered from depression or known someone who has, you know that when people are really depressed, they have a strong urge to stay in bed. Why do depressed people lie in bed? It isn't because of great snuggle time under the blankets. Beds are the location in the house most associated with inactivity A perfectly able-bodied person can't bring him or herself to rise out of bed. The intuitive answer is that a lack of motivation is to blame. The intuitive answer is okay as far as it goes. First, we have to detour to contemporary evolutionary psychology , which tells us that moods have a function: Moods help us pursue goals efficiently. These relationships between moods, goal, and effort hold for a variety of species. So this alternative theory turns the standard explanation on its head. Have you ever had difficulties getting out of bed? Write me with your experience at chartingthedepths@gmail.com