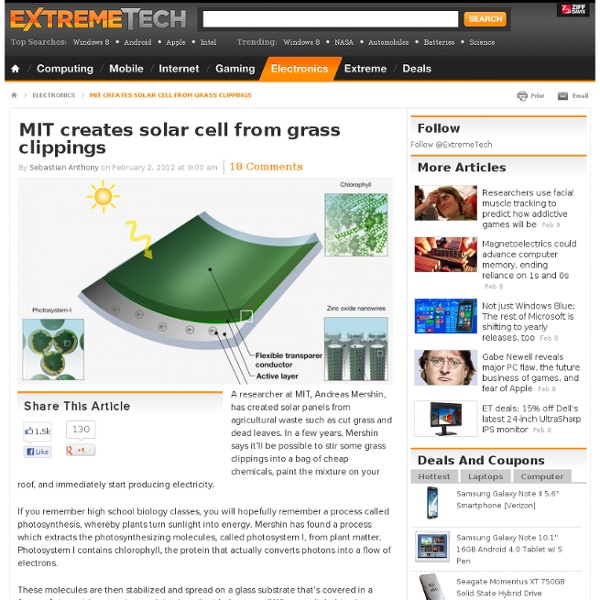 A researcher at MIT, Andreas Mershin, has created solar panels from agricultural waste such as cut grass and dead leaves. In a few years, Mershin says it’ll be possible to stir some grass clippings into a bag of cheap chemicals, paint the mixture on your roof, and immediately start producing electricity. If you remember high school biology classes, you will hopefully remember a process called photosynthesis, whereby plants turn sunlight into energy. Mershin has found a process which extracts the photosynthesizing molecules, called photosystem I, from plant matter. Photosystem I contains chlorophyll, the protein that actually converts photons into a flow of electrons. These molecules are then stabilized and spread on a glass substrate that’s covered in a forest of zinc oxide nanowires and titanium dioxide “sponges.” So far so good — now time for the reality check. Read more at MIT

Renewable energy Renewable energy is generally defined as energy that comes from resources which are naturally replenished on a human timescale such as sunlight, wind, rain, tides, waves and geothermal heat.[2] Renewable energy replaces conventional fuels in four distinct areas: electricity generation, hot water/space heating, motor fuels, and rural (off-grid) energy services.[3] About 16% of global final energy consumption presently comes from renewable resources, with 10% [4] of all energy from traditional biomass, mainly used for heating, and 3.4% from hydroelectricity. New renewables (small hydro, modern biomass, wind, solar, geothermal, and biofuels) account for another 3% and are growing rapidly.[5] At the national level, at least 30 nations around the world already have renewable energy contributing more than 20% of energy supply.

This solar panel printer can make 33 feet of solar cells per minute Whatever oil and gas true believers want to think, the world is doing this solar power thing. It’s getting cheaper and cheaper to make solar panels, and the panels are getting more and more effective. For example: A team in Australia just built a gigantic printer that spits out solar cells at a rate, Gizmodo reports, of about 33 feet every minute.

Why Piracy Is Indispensable For The Survival Of Our Culture Last Year Techdirt wrote about the case of the huge collection of historic jazz recordings that had been acquired by the US National Jazz Museum. The central problem is that even if the recordings can be digitized before they deteriorate, very few people will hear them because of their complicated copyright status. But as this eye-opening article from Benj Edwards explains, bad as that situation is, it's even worse for the entire category of software creations. For example, consider the earlier generation of floppy-based programs: Floppy disks, which were once used as the medium du jour for personal computers, have a decidedly finite lifespan: estimates for the data retention abilities of a floppy range anywhere from one year to 30 years under optimal conditions.

First plants caused ice ages, new research reveals New research reveals how the arrival of the first plants 470 million years ago triggered a series of ice ages. Led by the Universities of Exeter and Oxford, the study is published in Nature Geoscience. The team set out to identify the effects that the first land plants had on the climate during the Ordovician Period, which ended 444 million years ago.

BMW Hydrogen 7 - Hydrogen Motors I do not remember going to an auto show in Germany without seeing a prototype BMW hydrogen. For more than 30 years to work on hydrogen at the Munich manufacturer, and whenever I asked the question (and I asked each time), I responded that soon, cars would be available to customers. But over the past 3 years, I had felt that things accelerated, and I think it was in 2004 that told me that there would be a hydrogen version of the current generation of Round 7. BMW had previously made a model of Mini hydrogen, but progress usually comes from the top, and the series is rightly on the basis of a BMW 760 Li is gone.

This glass sphere might revolutionize solar power on Earth German architect André Broessel, of Rawlemon, has looked into his crystal ball and seen the future of renewable energy. In this case it’s a spherical sun-tracking solar energy-generating globe — essentially a giant glass marble on a robotic steel frame. But this marble is no toy. It concentrates both sunlight and moonlight up to 10,000 times — making its solar harvesting capabilities 35 percent more efficient than conventional dual-axis photovoltaic designs. More than 7,500-year-old fish traps found in Russia Public release date: 25-Jan-2012 [ Print | E-mail Share ] [ Close Window ] Contact: Marta Garcia Gonzalomarta.garcia.gonzalo@orgc.csic.es 34-915-681-476Spanish National Research Council (CSIC) A team of international archeologists, led by the Spanish National Research Council, has documented a series of more than 7,500-year-old fish seines and traps near Moscow.

All he is saying, is give pee a chance How the waste was won – a new pop-up restaurant for the Melbourne Food and Wine festival, which combines art, food and ecology, is about creating a sustainable world. NO DOUBT there's a more polite, even more technically accurate, way of phrasing this, but it doesn't get the message across half as well. And Joost Bakker is very much about sending the world a message. So when the celebrated artist/gardener/environmental designer/eco-entrepreneur pops up his Greenhouse restaurant concept for the Melbourne Food and Wine Festival in March, he will be well and truly taking the piss.