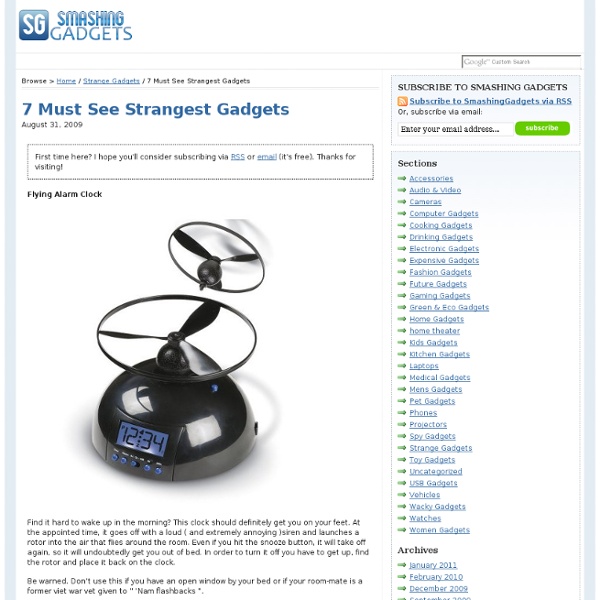 First time here? I hope you'll consider subscribing via RSS or email (it's free). Thanks for visiting! Flying Alarm Clock Find it hard to wake up in the morning? Be warned. SatuGo Bouncing Digital Camera Imagine combining your love for bouncing balls and your obsession with taking pictures into one. Traveller’s T-shirt While not exactly a gadget, it can be very useful for those who often travel to places where you don’t know to speak the native language. Brief Safe A safe way to store cash and other valuable. Day Clock This is the weirdest of them all. Infant “Hand” Pillow Sometimes babies wake up the moment they are laid to bed. Transparent Toaster Have you ever rushed to get things done and in the process ended up burned your toast? Related:  Gadgets

Le blog de l'équipe - « Virtual Barber Shop » This Prototype Hoverbike Could Land In A Year! » MTV Geek It was bound to happen sooner or later and we’re so happy it finally has. An Australian man by the name of Chris Malloy has built a functioning prototype of what can only be called a Hoverbike. It may not be the Speeder or Swoop bike Star Wars had us fantasizing about all these years, but there’s no denying the cool factor. According to a recent article over at Gizmag, the Hoverbike sports an 1170cc 4-stroke engine. Malloy still has a lot of work ahead of him and he is currently looking for investors to help get his Hoverbike off the ground. Another interesting thing the Hoverbike has going for it is the ultralight rating. What do you think?

25 Unusual Usb Designs July 13th, 2011 Anila Arshad This is my second part on usb designs, my first post is 10 Most Unique Usb Designs. My first post on usb design is really become so successful and my friends really like it so they mail me to add more designs here so today i try to add best and unseen usb designs and i hope this post is also make magic. This post is depend on 25 images that’s mean here you find 25 different usb designs these designs are not common and I really accept it that you never see these design before. You can leave a response, or trackback from your own site.

Smart Fridge by Ashley Legg Smart Fridge Is Your New Recipe Card The Smart Fridge here is for those who have shunted cooking to a hobby and rely more on designer microwave meals. The idea is to give you a fridge that is intelligent enough to come up with a healthy recipe, depending on what you stock in it. Not only that, it guides you with vocal instructions, spoon by spoon, till you dish out the perfect-wholesome meal. A touch interface door glams up the appliance, creating the desire to own a piece that’s futuristic but may not be what you’re looking for!

mental_floss Blog » 10 Ways to Game Up Your Home The first generation to grow up playing video games is now feathering empty nests, and plenty more gamers are buying and filling homes. Furniture and home decor companies keep adding designs catering to video game lovers, and those with a bit of time and creativity keep designing and building their own! A really dedicated gamer could furnish the entire house this way, but it's more likely you'd want to add just one or two game touches to your home to honor that side of your personality. 1. If you love playing Space Invaders, you'll also love the Space Invaders Couch designed by Igor Chak. 2. Instructables user rpaxton and her mother made this awesome Nintendo Bedding Set with comforter, pillowcases, and bed skirt as a surprise birthday gift for her brother, and then posted the pictures for the rest of us to envy. 3. The Tetris Cooking Timer works almost like an electronic hourglass. 4. 5. Dennis and Judith built this Mario Brothers storage unit for their apartment. 6. 7. 8. 9. 10.

Most-Magical Things to Buy in Hogsmeade (and Some to Avoid) | Underwire ORLANDO, Florida — The Wizarding World of Harry Potter brims with exclusive souvenirs and replicas that fans will recognize from the books and films. Some of them are awesome, but others aren’t worth a single Galleon. Here are just some of the wallet-busting tchotchkes available at the Universal Studios Orlando attraction, which opens Friday. Above: Dierdre Marshall, celebrating her 11th birthday at the park’s soft opening Thursday afternoon, gulps a Butterbeer ($2.50). The real-life version of Harry’s favorite drink isn’t alcoholic, but it is quite tasty, with butterscotch and shortbread flavors and a creamy head added on top. Dierdre’s wand came from Ollivander’s shop around the corner, where the Wandkeeper chose her a wand made of “hawthorne.”