Fastcodesign. What Happens When Video Games Can Read Your Face. Game developers have always been interested in how players might react to the characters and plots they created—but what if they could tell exactly how the player was feeling and tailor the game to their mood? 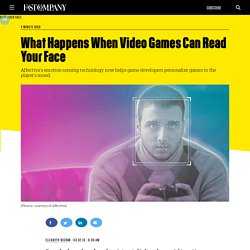 "Back in the olden days we had to do a lot of guesswork as game designers," says Erin Reynolds, the creative director of the gaming company Flying Mollusk. "Is the player enjoying this? Is the player bored? You had to create a game that was one size fits all. " But all that is changing fast. Moving? Students Devise A Smarter Way To Pack Boxes. Moving is the worst. 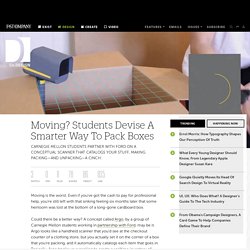 Even if you’ve got the cash to pay for professional help, you’re still left with that sinking feeling six months later that some heirloom was lost at the bottom of a long-gone cardboard box. Android Wear's New Strategy For Success In The Apple Watch Era. Some stomachs must have been turning at the Googleplex when Apple Watch sales estimates started rolling in last month. 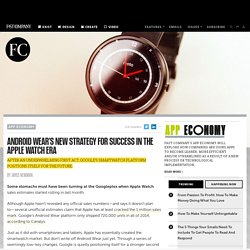 Although Apple hasn’t revealed any official sales numbers—and says it doesn’t plan to—several unofficial estimates claim that Apple has at least cracked the 1 million sales mark. Google's Android Wear platform only shipped 720,000 units in all of 2014, according to Canalys. Just as it did with smartphones and tablets, Apple has essentially created the smartwatch market. But don't write off Android Wear just yet. Through a series of seemingly low-key changes, Google is quietly positioning itself for a stronger second act. The Problem With 'Deaf Person Hears for the First Time' Videos. Screenshot/YouTube I admit it: I'm a total sucker for "inspirational" viral videos that pop up on Facebook and Twitter, especially if there are bunnies involved. 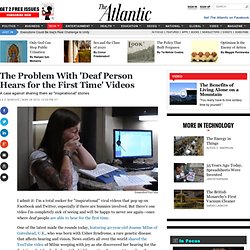 But there's one video I'm completely sick of seeing and will be happy to never see again—ones where deaf people are able to hear for the first time. One of the latest made the rounds today, featuring 40-year-old Joanne Milne of Gateshead, U.K., who was born with Usher Syndrome, a rare genetic disease that affects hearing and vision. News outlets all over the world shared the YouTube video of Milne weeping with joy as she discovered her hearing for the first time, but few looked past the highly emotional moment to explore the scientific explanation behind it, or to explore the question what it's truly like to be deaf.

The Problem With Wearable Technology, According To "Blade Runner" Designer Syd Mead. What Are “Nearables,” And Why Is Ideo So Excited About Them? Last week beacon technology--sensors which can trigger actions in devices that come within range, increasing their spatial intelligence--shrank in size and grew in opportunity with the introduction of Estimote Stickers. 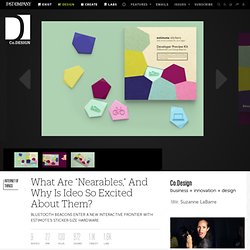 Three millimeter-thick adhesives no bigger than an oversize postage stamp, the nearly weightless Stickers--dubbed "nearables"--are an impressive evolution of the egg-sized Beacons that Estimote introduced in 2013. This New Moleskine Is Like An iPad Made Of Paper. Ask companies like Adobe and Fiftythree, and they’ll tell you that tablets are the future of drawing. 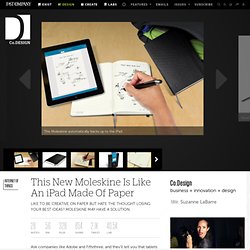 Give in, and get used to the concept of touching a stylus to your screen. Because as hardware and software get better, you’ll be able to create the sorts of things you can only dream about creating on paper. Moleskine--the preeminent journal company with no lack of self-interest in keeping paper alive--has presented the vision of another possible future. GravitySketch Tablet Is a Portable 3D Augmented Reality Sketchpad For Designers. There’s an imposing wall dividing real world creation and digital design. 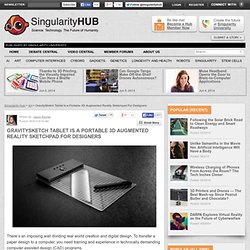 To transfer a paper design to a computer, you need training and experience in technically demanding computer assisted design (CAD) programs. Instead, imagine if we could mold digital designs in three dimensions as easily as we mold clay. Intuitive, powerful, and immersive interfaces would open the field to more people and inject more serendipity and improvisation into digital design. We may be entering a new era of computer interfaces where standard two-dimensional screen, keyboard, and mouse are enhanced by more instinctive 3D modes of interaction—modes that more closely mimic real world design methods.

In sci-fi, 3D interfaces tend to be holographic. Increasingly, instead of holograms, 3D interfaces are powered by a suite of devices working in tandem to produce the illusion of depth in augmented reality. Take the recently developed GravitySketch tablet. 3DTouch Works In 3 Dimensions & Could Replace The Computer Mouse. University of Wyoming researchers have developed a novel wearable device, called 3DTouch, which could revolutionize the way we interact with computers. 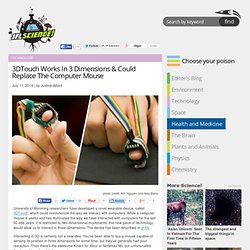 While a computer mouse is useful and has dominated the way we have interacted with computers for the last 50 odd years, it is restricted to two-dimensional movements; this new piece of technology would allow us to interact in three-dimensions. The device has been described in arXiv. This Architect Is Wearing His Wi-Fi Signal. There are invisible energy fields all around us. 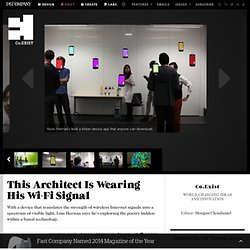 Now, one architect has invented a tool to introduce some of them to the spectrum of visible light. Luis Hernan's self-portraits show the artist and Newcastle University researcher dancing in a cloud of colorful Wi-Fi signals. Hernan intended to make his “Kirlian device,” a tool that picks up on Wi-Fi signals and translates them into colored lights, sound a little out-there. MIT's CityHome Is A House In A Box You Control By Waving Your Hand. Two hundred square feet. 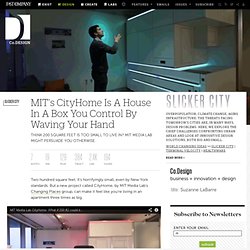 MIT's CityHome Is A House In A Box You Control By Waving Your Hand. How to Build a Speech-Jamming Gun. The drone of speakers who won’t stop is an inevitable experience at conferences, meetings, cinemas, and public libraries. Today, Kazutaka Kurihara at the National Institute of Advanced Industrial Science and Technology in Tskuba and Koji Tsukada at Ochanomizu University, both in Japan, present a radical solution: a speech-jamming device that forces recalcitrant speakers into submission. The idea is simple. Even chickens have their own virtual world. How much would you pay for organic, virtual free-range chicken breasts?

It doesn't really matter, you can't buy such a thing. But Austin Stewart, an assistant professor at Iowa State University, really seems to like the idea. Sculpt Sound With Gestures, Using Imogen Heap's $2,000 Gloves. Imogen Heap, a singer-songwriter who works largely in electronic sounds (and whom you may remember from her work in the band Frou Frou or this song), has long been confronted with a problem: How do you put on a show for people who are used to seeing guitars, drums, and pianos, when your music is created largely with computers, synthesizers, fader knobs, and processors? Her solution is the Mi.Mu Glove, the next version of which is now on Kickstarter. Making Leap Motion More Human, Less Minority Report In A New Campaign. When Leap Motion first unveiled its gesture control device for PCs and laptops last year, it unleashed a collective nerdgasm among technophiles who couldn't wait to ditch their keyboard and mouse for a set-up that looked more like Tony Stark's.

But when the company's flash drive-sized device was finally released, there was some grumbling it wasn't quite the hardware killer many thought it would be. Despite any mild disappointment that our Minority Report future hadn't arrived just yet, the company has been quick to answer critics by doubling its number of apps to about 150 since the summer and getting rave reviews for its new sculpting app Free Form. Tangible Audio Interfaces - Surface Matters Speaker Takes Commands by You Stroking its Fabric Cover. With The iPhone 5S, Apple Is Making You The Device. Apple has always been good at convincing people to interact with their computers by making them more intimate. The Apple II convinced people they needed a computer in their homes; the Mac anthropomorphized computers, made the metaphor of computing as relatable as a friendly face and a desktop. And the iPhone, of course, was a revolution precisely because it put a computer that responded to touch alone in the pockets of hundreds of millions of people around the world.

Today, Apple introduced a new feature to the iPhone 5S: a built-in fingerprint sensor called Touch ID squirreled away under the home button that gives you increased security for your iDevice. Levitate Objects With This Fitness Tracker For Your Brain. While exploring the demo area of a health conference this summer, I came across a small table where a handful of people wearing headsets and intently watching videos were sitting. An employee offered me a seat, rubbed some saline solution on my scalp, and placed one of the portable EEG devices on my head, adjusting its 14 tentacle-like sensors so that they could read my detailed brain activity. After watching a series of short videos, I received my "personality test" results via email, all based on how an EEG machine interpreted my engagement with the different videos.

Watch This $200 3-D-Printed Robot Crack Your iPhone ⚙ Co. A Social Map That Knows The Nearby Restaurants (Or Dry Cleaners) Your Friends Like.

Competitive Relaxation: A Turbo-Nerd’s Way To De-Stress ⚙ Co. Disney's Crazy Invention Lets You Feel Phantom Objects Floating In Air. This iPhone App Reports The Weather As A Daily Infographic. Weather apps tend to tell you too much information or too little. Why The Human Body Will Be The Next Computer Interface. Fresh From TED: A Mind-Blowing App That Could Remake Mobile Retail. Watch 600 Clock Arms Merge To Become A Single Digital Display. HP, Samsung Face Identity Crisis With Tablet-Laptop Hybrids. At a hotel in New York City earlier this week, HP showed off the HP Envy x2…notebook? Er, tablet. The Magic Number For Making Virtual Reality Feel Like Reality.