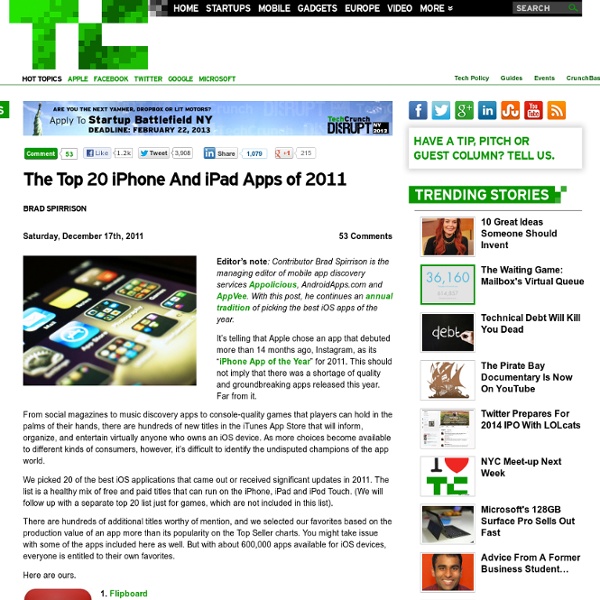 Editor’s note: Contributor Brad Spirrison is the managing editor of mobile app discovery services Appolicious, AndroidApps.com and AppVee. With this post, he continues an annual tradition of picking the best iOS apps of the year. It’s telling that Apple chose an app that debuted more than 14 months ago, Instagram, as its “iPhone App of the Year” for 2011. This should not imply that there was a shortage of quality and groundbreaking apps released this year. Far from it. From social magazines to music discovery apps to console-quality games that players can hold in the palms of their hands, there are hundreds of new titles in the iTunes App Store that will inform, organize, and entertain virtually anyone who owns an iOS device. We picked 20 of the best iOS applications that came out or received significant updates in 2011. Here are ours. 1. After launching exclusively on iPads last year, this pioneering social magazine expanded to all iOS devices in December. 2. 3. 4. 5. 6. 7. 8. iMuscle 9.

Best and worst stereoscopic 3D console games | Crave It sometimes seems that the only time people talk about 3D TV lately is to knock it . The much-hyped 3D revolution hasn't exactly set the world on fire after it kicked off at CES 2010, and even though plenty of new television sets are 3D compatible, the actual amount of 3D content available remains slim (and with 3D losing its luster at the box office, it may become slimmer still). One possible exception is stereoscopic 3D video games , currently supported by both the Xbox 360 and PlayStation 3. On the PC side, stereoscopic 3D has been around for several years, thanks to Nvidia's 3D Vision platform, which uses compatible hardware and active shutter 3D glasses to enable you to at least try and play almost any PC game. On the console side, however, 3D support must be specifically built in, and you'll find it on a case-by-case basis. The games listed here represent a many (but not all) of the Xbox 360/PS3 console games with 3D support released in 2011 (plus a few holdovers from last year).

Quick List: iPad Resources For The Classroom One question that comes into my inbox or on Twitter a lot lately is one dealing with iPads. Many schools and classrooms all over are investing in these devices and educators want to know how to use them effectively, apps to consider and more. In keeping with the "My Favorite Resources" theme (last week I listed my favorite resources for talking about Twitter) here are my go-to resources when people ask me about iPads in the Classroom. ISTE iPad In Education Webinar Resources A while back ISTE ran a great webinar with some fabulous educators on using iPads in the classroom. According to the National Council of Teachers of Mathematics, educators should... How do Asian nations make it to the top educational spots, and how does the U.S... Here are some useful links to hope your students comprehend this difficult... Here are a few components of Finland's current education system structure and... March into this collection of weather lesson plans for primary grades and you... iPads For Education

Buying Guide: iPad cases Whether you have a new iPad, an older iPad, or an iPad mini, consider using a protective case or carrying bag to minimize the risk of damage. True, the sleek design of this tablet family makes you want to show off your iPad, but they are still vulnerable to scratches and scuffs. While we haven’t tested every case and bag on the market, here’s a rundown of the most common types, along with a few good examples of each. Shopping tips There are hundreds of third-party iPad cases and bags on the market, each specifically made for either the full-sized iPad or the iPad mini. When looking at the full-sized iPad line, keep in mind that, apart from the third- and fourth-generation iPads, each iPad model has a slightly different shape from the last. Though this sounds like a lot of information, relax: most cases specify which iPad models they’ll work with on the packaging. If you're shopping for a bag, and you see one that claims to be perfect for both iPads and netbooks, be suspicious.

mental_floss Blog » 10 Ways to Game Up Your Home The first generation to grow up playing video games is now feathering empty nests, and plenty more gamers are buying and filling homes. Furniture and home decor companies keep adding designs catering to video game lovers, and those with a bit of time and creativity keep designing and building their own! A really dedicated gamer could furnish the entire house this way, but it's more likely you'd want to add just one or two game touches to your home to honor that side of your personality. 1. Space Invaders Couch If you love playing Space Invaders, you'll also love the Space Invaders Couch designed by Igor Chak. 2. Instructables user rpaxton and her mother made this awesome Nintendo Bedding Set with comforter, pillowcases, and bed skirt as a surprise birthday gift for her brother, and then posted the pictures for the rest of us to envy. 3. The Tetris Cooking Timer works almost like an electronic hourglass. 4. 5. Dennis and Judith built this Mario Brothers storage unit for their apartment.

In Which We Reveal The Top CES 2012 Trends Without Breaking Embargoes CES 2012 is going to be a crapshoot of predictable products. How do we know? Meetings, lots and lots of pre-show meetings. So, what can we expect to see at CES this year? MacBook Air Clones First up, every computer company will debut several ultrabook models. Larger screened ultrabooks are also on tap. So-called Smart HDTVs Google chairman Eric Schmidt previously stated that by the summer of 2012, “the majority of television you see will have Google TV embedded in it.” From what we’ve seen, several major manufacturers will debut Android powered HDTVs that feature little to no Google TV 2.0 design elements. The companies debuting smart TVs at CES are seemingly determined to get the jump on Apple this time around. Android Tabs And More Even with the Kindle Fire currently getting all the attention, the Asus Eee Transformer line is the Android fanboy favorite. Several smart TV concepts have optional voice controls. But don’t fret, friends.

iBuild iPad Lessons: TCEA 2012 Top 20 Ultimate Ways to Use a Disposable Camera When it comes to photography, we like to root for the little guy. He’s the picture taker that works hard, is easy going and is always around when you need him. Yep, we’re talking about one of our old favorites: the disposable camera. While we love adding filters to our phone pics and making masterpieces with our DSLRs, there’s something magical about disposable cameras we can’t forget… They’re cheap, fun to play with and can do almost anything! Here’s our top 20 list of didn’t-know-you-could-do-that ways to use, abuse, modify, and make the most of your disposable camera! Top 20 Creative Ways to Use a Disposable Camera Smack some extra exposures out of it Our first tip started out as a simple way to get our disposable’s flash to fire, but we soon discovered something far greater. Much to our surprise, this trick will also often force the shutter open to make a double exposure! The process is simple: Charge your flash (most disposables have a button for this.)Hold camera in one hand, and SMACK!

Nils Völker - One Hundred and Eight summer/autumn 2010 One Hundred and Eight is an interactive wall-mounted Installation mainly made out of ordinary garbage bags. Controlled by a microcontroller each of them is selectively inflated and deflated in turn by two cooling fans. Although each plastic bag is mounted stationary the sequences of inflation and deflation create the impression of lively and moving creatures which waft slowly around like a shoal. But as soon a viewer comes close it instantly reacts by drawing back and tentatively following the movements of the observer. As long as he remains in a certain area in front of the installation it dynamically reacts to the viewers motion. 2.40 x 1.80 m cooling fans, plastic bags, MDF, custom electronics Exhibitions 2011 » B-Seite Festival, Mannheim, Germany » ISEA 2011 Istanbul, Turkey » Rewire Festival, The Hague, Netherlands