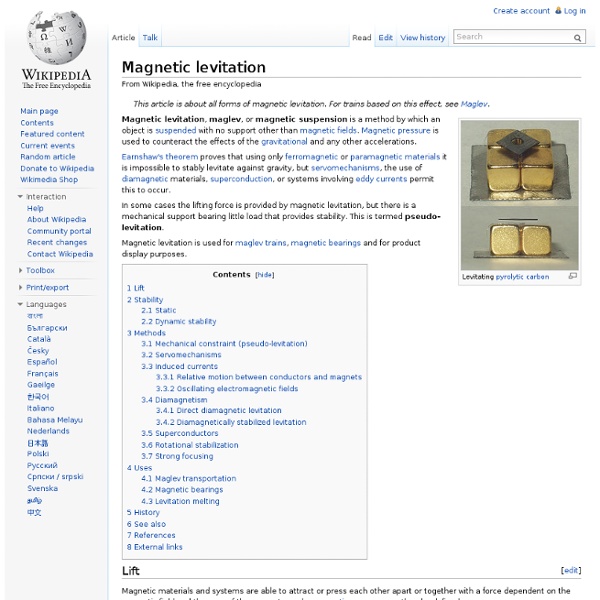 Magnetic levitation, maglev, or magnetic suspension is a method by which an object is suspended with no support other than magnetic fields. Magnetic pressure is used to counteract the effects of the gravitational and any other accelerations. Earnshaw's theorem proves that using only ferromagnetic or paramagnetic materials it is impossible to stably levitate against gravity; however, servomechanisms, the use of diamagnetic materials, superconduction, or systems involving eddy currents allow to achieve that. In some cases the lifting force is provided by magnetic levitation, but there is a mechanical support bearing little load that provides stability. Magnetic levitation is used for maglev trains, magnetic bearings and for product display purposes. Lift[edit] Magnetic materials and systems are able to attract or press each other apart or together with a force dependent on the magnetic field and the area of the magnets, and a magnetic pressure can then be defined. where Stability[edit]

Predator takes visual object tracking to new heights – Computer Chips & Hardware Technology Cameras have slowly made their way into the portable gadgets we all carry around with us and not having a camera in a new device is viewed as a missing feature. It’s got to the point now where the latest smartphones even have two cameras so as to make for better video chat. But while the prevalence and quality of the cameras has gone up, the software still lags behind in terms of being able to identify and track objects in any real-time or captured footage. That is about to change due to the work of Czech student Zdeneki Kalai. This algorithm not only tracks, it learns the more it gets used. Kalai believes what he has created, a combination of tracking, learning, and detection is completely unique and allows for a whole new set of functionality to be applied when looking at video feeds. In the video he gives examples of a new interface that can detect your fingers and use them to draw, learning to get better at trakcing those fingers as it is used more. Read more at GottaBeMobile

WTF | Oddity Central - Collecting Oddities - Part 6 Sadhu Amar Bharati is an Indian holy man who claims he has kept his right hand raised in the air since 1973. Now, 38 years later, his hand is just a useless piece of skin and bone, but has become a symbol for Shiva worshipers around India. Until 1970, Amar Bharati was an average middle-class man who lived a normal life. Other sources claim Amar Bharati felt disillusioned by all the fighting going on in the world, and decided to raise his right arm for peace.

Japanese Scientists Create Touchable Holograms // Current To Our Faithful Current.com Users: Current's run has ended after eight exciting years on air and online. The Current TV staff has appreciated your interest, support, participation and unflagging loyalty over the years. Your contributions helped make Current.com a vibrant place for discussing thousands of interesting stories, and your continued viewership motivated us to keep innovating and find new ways to reflect the voice of the people. We now welcome the on-air and digital presence of Al Jazeera America, a new news network committed to reporting on and investigating real stories affecting the lives of everyday Americans in every corner of the country. Thank you for inspiring and challenging us. – The Current TV Staff