What makes a hero? - Matthew Winkler 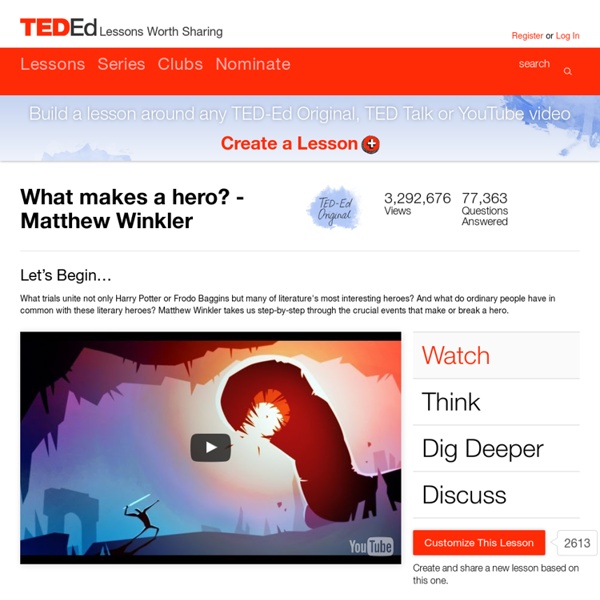 The Hero Archetype in Literature, Religion, and Popular Culture: (along with a useful PowerPoint presentation teachers can download at this URL: )Maricopa Center for Learning and Instruction (users embark on their own hero's journey): American Masters Lesson from PBS for Teachers on George Lucas, the Power of Myth, and the Hero's Journey: an interactive approach to the Hero's Journey: of course, information about Joseph Campbell's works on the subject, on the Joseph Campbell Foundation site:The Hero With A Thousand Faces Hero's Journey (semi-biographical film): the stories of (a) Odin hanging from the world tree, Yggdrasil, (b) the Buddha seated under the Bodhi Tree, and (c) the crucifixion of Jesus Christ. Do all of these religious episodes follow the pattern of the hero’s journey? Find a comparable story from another continent. Does it follow the hero’s journey pattern?Challenge the paradigm.

The Neiling II House About 30 miles outside of Berlin, Germany the landscape gets a tad rural and monotonous. However, the rugged wilderness setting in this part of the country gave architect Peter Grundmann the chance to create a forest-dwelling that was both minimal in style but contemporary in form; suited to blend in with the landscape, not detract from its surroundings. Dubbed the House Neiling II, it’s comprised totally from glass and wood, including a beautiful glass facade, a handful of homemade furniture and a custom bathroom and kitchen thanks to Grundmann’s collaboration with Thomas Pohl. The motivation for the project surrounds the ideas of an old barn, venturing into the territory of low-cost, prefabricated materials that yield a modern look. Inside, glazed walls and the open floor plan result in a bright living space complimented with brick, and stone interior with plywood furniture that feeds into the home’s rustic and warm aesthetic.

How to Write with Style: Kurt Vonnegut’s 8 Keys to the Power of the Written Word Find a Subject You Care About Find a subject you care about and which you in your heart feel others should care about. It is this genuine caring, and not your games with language, which will be the most compelling and seductive element in your style. I am not urging you to write a novel, by the way — although I would not be sorry if you wrote one, provided you genuinely cared about something. A petition to the mayor about a pothole in front of your house or a love letter to the girl next door will do. How to Find Your Bliss: Joseph Campbell on What It Takes to Have a Fulfilling Life by Maria Popova “You have to learn to recognize your own depth.” In 1985, mythologist and writer Joseph Campbell (March 26, 1904–October 30, 1987) sat down with legendary interviewer and idea-monger Bill Moyers for a lengthy conversation at George Lucas’s Skywalker Ranch in California, which continued the following year at the American Museum of Natural History in New York.

50 Fictional Days Immortalized in Literature Today is April 4th, the day on which George Orwell’s 1984 famously begins—in the year 1984, of course (a year that seems rather closer than usual right now). Inspired by this literary holiday of sorts, I went out in search of other notable fictional dates—that is, specific days on which something interesting happens in literature (as opposed to actual events that are reported in novels, as background or otherwise). I’m sure there are an infinite number of these out there, but there are also an infinite number of books in which the author never pins down the events at all, rather letting them float in the reader’s imagination—an approach that certainly has its merits.

Welcome to Immigration Did You Know? Emigrant and immigrant are related words Learn more The invention of steamships transformed immigration Learn more Most of the immigrants who came to America through Ellis Island were from eastern and southern Europe. Deus Ex Machina Ago TT Any fan of motorcycle culture has heard of the Tourist Trophy racing days of the 1960’s and ‘70s. And we’ll bet those same individuals remember the name of Giacomo Agostini, winner of 13 Grand Prix championships and 10 Isle of Man TT’s during that time frame. Now, in conjunction with MV Agusta, Deus Ex Machina introduces The Ago TT, a tribute to commemorate such a golden era of motorcycle racing, and the riders who competed with style.

Data Mining Novels Reveals the Six Basic Emotional Arcs of Storytelling Back in 1995, Kurt Vonnegut gave a lecture in which he described his theory about the shapes of stories. In the process, he plotted several examples on a blackboard. “There is no reason why the simple shapes of stories can’t be fed into computers,” he said. “They are beautiful shapes.” Joseph Campbell — Blog — On-Seeing A Confession Unlike many of my other posts, this one starts with a personal confession. Although I am an ordained minister, I still have a HUGE problem with the word God. When I really take the time to ask myself – what makes my belly tighten when I hear the word God, I realize that my critique is not really so much about the idea of God. Sorry, Ebooks. These 9 Studies Show Why Print Is Better Don’t lament the lost days of cutting your fingers on pristine new novels or catching a whiff of that magical, transportive old book smell just yet! A slew of recent studies shows that print books are still popular, even among millennials. What’s more: further research suggests that this trend may save demonstrably successful learning habits from certain death.

Compare & Contrast Map This interactive graphic organizer helps students develop an outline for one of three types of comparison essays: whole-to-whole, similarities-to-differences, or point-to-point. A link in the introduction to the Comparison and Contrast Guide give students the chance to get definitions and look at examples before they begin working. The tool offers multiple ways to navigate information including a graphic on the right that allows students to move around the map without having to work in a linear fashion. The finished map can be saved, e-mailed, or printed.

Pan Speed Shop Meka Motorcycle Sometimes, when people decide to open up a custom vehicle shop – motorcycle, car, or otherwise – it can take years of planning and work to get off the ground. And that can mean that a viable product won’t be released for at least that amount of time or more. That wasn’t the case with Pan Speed Shop out of Madrid. This Spanish firm, born from the minds and experience of Pedro Garica-Tapia and Efraón Triana, was just formed in June of 2016, but they’ve already released their first project, The Pan Meka Motorcycle, and it is a thing to behold.

Kids explain how banned and challenged books helped them and even saved their lives / Boing Boing By Joan Bertin and Millie Davis Banned Books Week has come and gone but we can be sure of one thing: the coming year will be marked by challenges to the same kinds of books that were controversial this year, and in years past. report this ad Controversies over what books are taught in class or shelved in the school library typically start when an adult—usually a parent or community member—feels that a book selected by teachers and librarians is inappropriate, offensive or objectionable. Most often, the objections relate to sexual scenes, offensive language, or depictions of drug and alcohol use. The Hero's Journey: The Top 10 Spiritual Quest Books to Read Now - Mechanics of Being The Hero’s Journey is American scholar, Joseph Campbell’s, reference to the classic story pattern of innocence to adventure, adventure to challenge, challenge to growth, with the eventual reward of self-realization. Most fiction follows this path, but when it also contains a higher perspective of life as a spiritual quest, and the journey as the road to self-realization, the story becomes more than just a story – it becomes an inspirational framework with which to view your own life. Here is a list of the 10 best spiritual quest books I have read…so far.

The world’s required reading list: The books that students read in 28 countries In the US, most students are required to read To Kill a Mockingbird during their school years. This classic novel combines a moving coming-of-age story with big issues like racism and criminal injustice. Reading Mockingbird is such an integral part of the American educational experience that we wondered: What classic books are assigned to students elsewhere? We posed this question to our TED-Ed Innovative Educators and members of the TED-Ed Community.