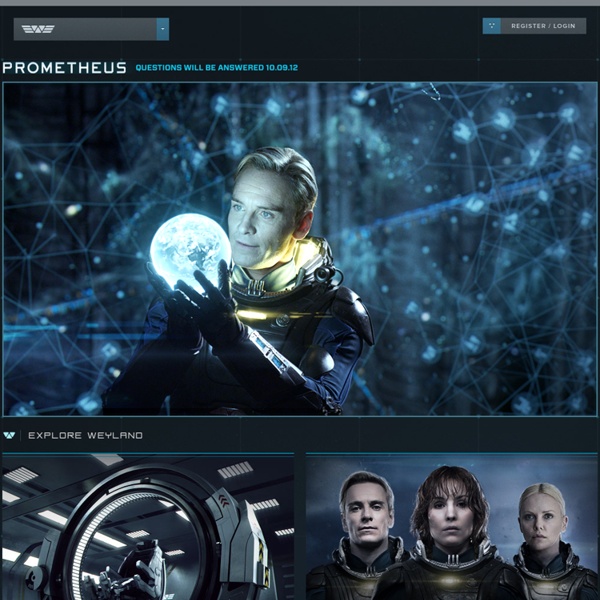 A “Close Reading” of Stanley Kubrick’s “2001: A Space Odyssey” Preamble* A few weeks ago and for the first time I watched Stanley Kubrick’s 1968 movie 2001: A Space Odyssey in segments on Youtube. It made such a powerful impression on me that I immediately bought the DVD. I also found the Wikipedia webpage on the movie; I skipped the plot summary, but wanted to read about the reception of the movie, and was pleased to see that it was considered the best movie of all time by one critical journal, and usually places in the “top ten” lists of others. I have not yet watched the special features on my disk, nor have I done any research at all on the movie apart from what I mentioned above.

Prometheus Movie Discussion Link to Timeline: Welcome to the most expansive timeline of the Alien films available. It is based on the four 20th Century Fox films: Alien, Aliens, Alien 3, and Alien Resurrection, their respective novelisations, and film production information from a variety of sources. It also includes some references from the Colonial Marines Technical Manual by Lee Brimmicombe-Wood. The events concerning the Nostromo's landing on LV-426 take place in the period 2063-2123. Dark Room what is wrong with this picture? it looks as if everything has gone kind of crazy. mysterious shadows slice the world into jagged fragments whether it's day or night. meanwhile, in the corners of the room, blackness itself collects in thick pools like congealing blood. the walls are closing in like a big steel trap snapping shut in slow motion. paranoia and dread hang heavily in the air... welcome.

Strange Video From Neill Blomkamp Appears on iPads It’s a pretty common occurance to see video ads display before opening up an app or watching video on the Apple iPad. However, in the latest iPad version of Wired Magazine (issue 18.12), a mysterious and unexplained video appears instead, and it’s credited by District 9 director Neil Blomkamp. What could this be? As you can see above, the found footage-style video shows two kids who drive out to the side of a road and find a nasty-looking dead pig-like creature with a big stamp on it. The stamp says “18.12 AGM Heartland Pat Pend USA” and “US Inspected And Approved”. This looks to be located outside some kind of factory, and the camera points in that direction to make sure we notice it.

Art of Jin More random sketches. Offbeat theme day, I suppose. So it had occurred to me at some point, if I ever wanted to do a comic and properly, I had to fundamentally change how I drew, ground up. At the time I had this painting oriented style where everything was drawn to and for the color.

Peter Weyland at TED2023: I will change the world Peter Weyland has been a magnet for controversy since he announced his intent to build the first convincingly humanoid robotic system by the end of the decade. Whether challenging the ethical boundaries of medicine with nanotechnology or going toe to toe with the Vatican itself on the issue of gene-therapy sterilization, Sir Peter prides himself on his motto, “If we can, we must.” After a three year media blackout, Weyland has finally emerged to reveal where he’s heading next. Wherever that may be, we will most certainly want to follow. Conceived and designed by Ridley Scott and Damon Lindelof and directed by Luke Scott.

Jane Austen’s Contemporaries - Regency Reader Janeites and hist-ro fans undoubtedly have wished at least once (if not many, many times) that there were more Austens to read and absorb, to soak in during a long hot soak, to curl up to at bedtime. And almost having exhausted Heyer’s most excellent body of hist-ro works, I began to seriously wish this yet again. So after a troll, here is the wonderful world of Jane Austen’s contemporaries now just a click away. Frances Burney penned several well received novels, including Evelina, Cecilia and Camilla recommended for lovers of Jane. Written in the late Georgian era, she was a lady who braved the public scorn and censure by brandishing a wickedly sharp pen.

Trilogy Art Print by Danny Haas New All « PrevNext » Newly Launched “Dredd” Viral Site Riffs The Drudge Report Dredd may be coming out in theaters next month, but the film’s promotion is just kicking off. After Dredd received some solid reviews at Comic-Con earlier this year, the film is entering a new stage of the marketing campaign. Firstshowing reports that a viral site called The Dredd Report has launched. Gary Larson Gary Larson (born August 14, 1950) is a U.S. cartoonist. He is the creator of The Far Side, a single-panel cartoon series that was syndicated internationally to over 1,900 newspapers for fifteen years.[1] The series ended with Larson's retirement on January first, 1995. His twenty-three books of collected cartoons have combined sales of more than forty-five million copies.[1] Early life and education[edit] Larson acknowledges his family has "a morbid sense of humor",[1] and he credits his older brother, Dan, for his "paranoid" sense of humor.[2] Dan pulled countless pranks on Gary, taking advantage of his fear of monsters under the bed by waiting in the closet for the right moment to pounce. Dan "'scared the hell out of me,' whenever he could",[1] Gary has said, but Dan is also credited for nurturing Gary's love of scientific knowledge.

Movie Trailers Subscribe to SUPERCOMICFUNTIME: to TRAILERS: us on FACEBOOK: us on TWITTER: Evans & Mark Ruffalo 'Avengers: Age of Ultron' Exclusive Interview: Comic-Con (2014) HD The Top Comic-Con 2014 Videos: All SDCC 2014 Videos: Chris Evans & Mark Ruffalo stop by at San Diego Comic Con, to discuss their new film 'Avengers: Age Of Ultron', goofing off on set, and James Spader as a villain. Comic-Con 2014: where nerds come together. Movieclips is dedicated to bringing you all the hottest highlights from SDCC. From exclusive celebrity interviews, to cosplay, to behind-the-scenes footage of outside comic-con experiences, we’ve got you covered. Some Came Running So. A couple of months, or weeks, or something, ago—my sense of time grows simultaneously more compressed and expanded as I grow older—someone on social media asked me where I ranked Bond movie X, and it reminded me that a few years back I labored somewhat mightily for my then-freelance-client, an entity called MSN Movies, on a lengthy piece in which I ranked the Bond pictures. That piece, published in annoying multi-click "gallery" form, has been purged from what is left of the MSN website, along with pretty much everything else I did for it.

Hocus Pocus (1993) Full Movie Video Log in Comedy Movies & Films - Full Length Cynthia Yildirim Hocus Pocus (1993) Full Movie Hell.com Hell.com is an internet domain which has achieved a degree of notoriety due to its name, and an intentionally mysterious website that existed there from August 1995 to 2009 created by the first registrant of the domain, artist Kenneth Aronson.[2][3] The domain was sold by Aronson in 2009 to domain investor Rick Latona who put it up for auction several times in 2010, with reserves of up to US$1.5 million.[4][5] The domain receives thousands of curious visitors daily.[6] Hell.com under Aronson ownership[edit] Several versions of the Hell.com website were created during Aronson's ownership of the domain. All the designs in the areas generally available to the public were simple and sparse, but employed mysterious text, purposefully difficult navigation and javascript tricks to create an intriguing experience that suggested something deeper, and which appealed to curious visitors, hackers, and others. A sub-domain of Hell.com, bat.hell.com stated: