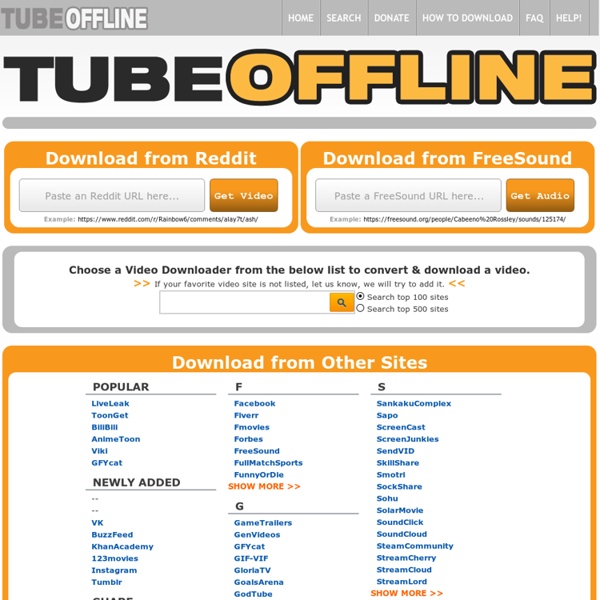 SurfTheChannel August 28, 2014 Question 1 of 4: How often do you use Mozilla Firefox? Question 2 of 4: How satisfied were you with the previous versions of Mozilla Firefox? Question 3 of 4: Season 1 Full Episodes Video Streaming & Torrent Search Warehouse 13 Synopsis Warehouse 13 is a science fiction television series that debuted on SyFy channel on July 7th 2009. Warehouse 13 follows the story of two former Secret Service agents Peter Lattimer (played by Eddie McClintock) and Myka Bering (played by Joanne Kelly) who have been assigned to Warehouse 13, a secret government facility that houses supernatural objects. Warehouse 13 is written by Rockne S.

Smashing Picture Anime manga, fan art, drawings, speed painting or illustration, everything looks awesome and DeviantART user UdonNodu deserves to be on SmashingPicture. Well done! ↑ Back to top Movie series ratings - StumbleUpon Movie series ratings Graph mode: absolute | relative | global relative Global relative mode. 20 GIF Reactions to Real-Life Situations (9.26.11 Here’s a fresh round of animated GIFs that perfectly characterize how it feels when we encounter these everyday scenarios. When someone steps on the back of your shoe When someone you hate says something funny When you have too much sugar When you see your ex after the breakup 25 Spectacular Movies You (Probably) Haven’t Seen Midnight in Paris Woody Allen’s latest places starving writer Owen Wilson in Paris with his fiancée, Rachel McAdams. Searching for inspiration for his incomplete novel, Owen begins taking strolls around the city at night where he discovers an unexpected group of people.

Jamie Beck’s Animated GIF Photography New York City-based fashion photographer Jamie Beck, in collaboration with Kevin Burg, a web designer with a background in video and motion graphics, has created a series of gorgeous animated GIFs she calls “cinemagraphs”. A couple of them feature Canadian supermodel Coco Rocha, and these have gained quite a bit of media exposure recently. According to Rocha, cinemagraphs are “more than a photo, but not quite a video.” Even though the concept of animated GIFs is as old as the Internet, the ones circling around the web are often tacky and low brow.

List of Person of Interest episodes Series overview[edit] Episodes[edit] Season 1 (2011–12)[edit] The New Rules of TV: Movies + TV Nearly everything about how we watch television has changed. For starters, we can do it anytime we want. (Thank you, Hulu, Netﬂix, and stuff we've never heard of!) And yes: The shows are a whole lot sexier, more terrifying, complex, and hilarious than the ones we grew up with. It is, as people like to say, a new golden age of television. What few of the countless TV evangelists talk about, though, is that all that change means you can't watch the way you used to.