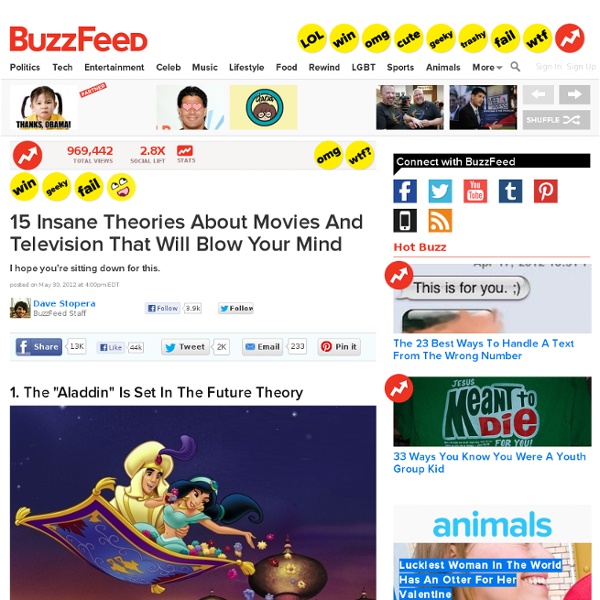 There’s a scene in “Aladdin” where Genie calls Aladdin’s clothes “so 3rd century.” However, as we all know, the Genie was locked inside a lamp for the past 10,000 years, meaning that there is no way he could have known what the 3rd century was like. This means that “Aladdin” actually takes place in the FUTURE, in at least 10,300 AD. The movie itself is set in a post-apocalyptic wasteland, one where only some Arabic culture has survived. The things called “magic” are actually just some of the technological marvels left behind by the previous civilization. These include flying carpets and genetically engineered parrots which can comprehend human speech instead of just mimicking it. None of the babies in “Rugrats” actually exist, but they are all instead figments of Angelica’s imagination, as result of her parent’s negligence. “Friday” is about the JFK assassination. There are actually two Inspector Gadgets. From Cracked’s “6 Movie and TV Universes That Overlap in Mind-blowing Ways”:

20 Tips for Directing Talent You might be inclined to reserve the term "talent" for someone who is a gifted actor, or at least someone who has some type of on-camera experience. But in the world of video "talent" refers to anyone who steps in front of the lens. In reality, you'll need to use regular people from all walks of life and professions as talent for your videos. People who are not used to talking in front of the camera. People who will rely on you to make sure they will look good on tape.

The illustrated guide to a Ph.D. Imagine a circle that contains all of human knowledge: By the time you finish elementary school, you know a little: By the time you finish high school, you know a bit more: With a bachelor's degree, you gain a specialty: How Much Money You Need To Realistically Recreate The Scrooge McDuck 'Gold Coin Swim' After executing smart mortgage derivatives and diversifying high yield stocks, cash should start flowing freely, leaving the smart investor with even more questions, like “how do I protect my municipal bonds?” and, “should I invest in a C-Share or blend fund?” and, “how much money do I need to create giant floes of gold in a private vault and dive into it like Scrooge McDuck?” In most money circles (insider tip: “money circles” is a term used by only the most elite investors), wealth is measured exclusively by how closely one can recreate this famed animation. It has come to represent success in America and anything less than doing the backstroke amongst a sea of Earth’s rarest metal should be considered an abject failure.

Film Directing Tips 1. Shooting in Slow Motion 2. Shooting Comedy Scenes 3. 15 Amazing Animated Short films We all love short animated films, but creating short film is very hard task. Putting whole story in 5 to 10 minutes is not easy. Can you imagine? You Should Date An Illiterate Girl Date a girl who doesn’t read. Find her in the weary squalor of a Midwestern bar. Find her in the smoke, drunken sweat, and varicolored light of an upscale nightclub. Wherever you find her, find her smiling. Make sure that it lingers when the people that are talking to her look away.

mputer files link TV dirty tricks to favourite for Mexico presidency Read a joint statement about this story from the Guardian and Televisa here. Mexico's biggest television network sold prominent politicians favourable coverage in its flagship news and entertainment shows and used the same programmes to smear a popular leftwing leader, documents seen by the Guardian appear to show. The documents – which consist of dozens of computer files – emerge just weeks ahead of presidential elections on 1 July, and coincide with the appearance of an energetic protest movement accusing the Televisa network of manipulating its coverage to favour the leading candidate, Enrique Peña Nieto. The documents, which appear to have been created several years ago, include:

Steven Soderbergh: State of Cinema First of all, is there a difference between cinema and movies? Yeah. If I were on Team America, I’d say “Fuck yeah!”