Peter Weyland at TED2023: I will change the world 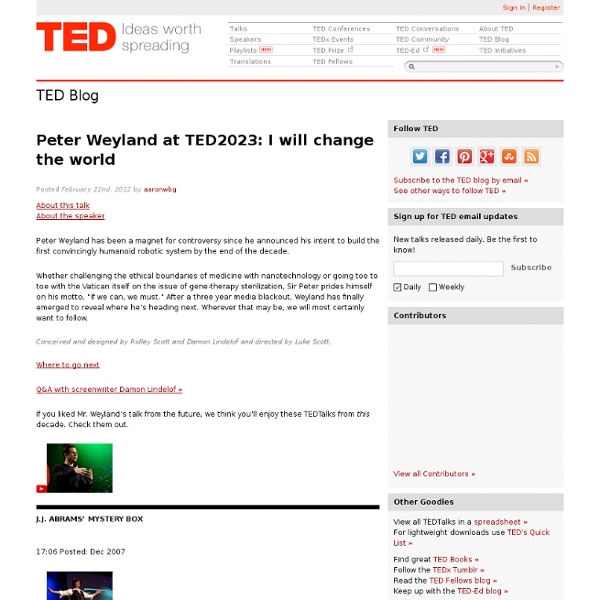 Peter Weyland has been a magnet for controversy since he announced his intent to build the first convincingly humanoid robotic system by the end of the decade. Whether challenging the ethical boundaries of medicine with nanotechnology or going toe to toe with the Vatican itself on the issue of gene-therapy sterilization, Sir Peter prides himself on his motto, “If we can, we must.” After a three year media blackout, Weyland has finally emerged to reveal where he’s heading next. Wherever that may be, we will most certainly want to follow. Conceived and designed by Ridley Scott and Damon Lindelof and directed by Luke Scott. Sir Peter Weyland was born in Mumbai, India at the turn of the Millennium. In less than a decade, Weyland Corporation became a worldwide leader in emerging technologies and launched the first privatized industrial mission to leave the planet Earth. Related:  inspiration

7 Stress Tips I Wish I'd Known before I Entered the Real World By As graduation approaches for many people around the country in the next few weeks, I've been reflecting on the nine years that have passed since I received my law degree. The date was May 20, 2002, and I remember gliding across the graduation platform to shake the dean's hand and grasp my hard-earned diploma. Little did I know then that the knowledge I had in my head would be only one tool in a large toolkit I would need to build in order to have both a successful and sustainable career . Stress is not a subject taught in school, it's just something we all experience as part of life. 1. 2. 3. a. b. c. d. 4. 5. 6. 7. The world needs more of you - strong, talented go-getters who are able to navigate the pressure that comes with being a high-achieving professional. Csikszentmihalyi, M. (1991). Fredrickson, B. (2009). Loehr, J., & Schwartz, T. (2001). McClellan, S., & Hamilton, B. (2010). Schwartz, B. (2004).

Transmedia Case Study: The Three Little Pigs If the Three Little Pigs were told as a transmedia story it might be designed like this: The basic story would be told in an anchoring medium, such as a novel, TV show, or film. In this case, it’s a short story.There are four primary characters to expand and explore: three pigs and a wolf. The hypothetical transmedia version of the Three Little Pigs is not the repurposing of story across different platforms. Developers could decide if participant interaction, such as solving the sustainable materials problem, finding the wolf through clues and maps, or creating another character for the story, could move the story in different directions than the original version.

beActive unveils new transmedia documentary show Road To Revolution Road To Revolution will follow three Portugese journalists across the Middle East tracking the path of last year’s revolutions. Multi-award winning transmedia production company beActive has announced the production of a new documentary show focussed on the revolution that affected the Middle East last year. Produced by beActive with the support of Portuguese weekly Sol and retail chain Sportzone, Road To Revolution will follow three Portugese journalists - Tiago Carrasco, Joầo Henriques and Joầo Fontes - as they travel over 9,000 miles by land and sea across ten countries in the Middle Eastern region following the path of revolution that became known as the Arab Spring. Initially available as a series of online video blogs to be posted on an official website, as well as on Sol’s website, the blogs will then be edited into a feature-length documentary available for film release and television broadcast by the end of this year.

Einsteins Puzzle # Copyright (C) 2004 Lauri Karttunen # # This program is free software; you can redistribute it and/or modify # it under the terms of GNU General Public License as published by # the Free Software Foundation; either version 2 of the License, or # (at your option) any later version. # This program is distributed in the hope that it will be useful, # but WITHOUT ANY WARRANTY; without even the implied warranty of # MERCHANTABILITY or FITNESS FOR A PARTICULAR PURPOSE. See the # GNU General Public License for more details. Einstein's Puzzle Variations of this riddle appear on the net from time to time. Let us assume that there are five houses of different colors next to each other on the same road. The Englishman lives in the red house. The question to be answered is: Who keeps fish? This is a simple constraint satisfaction problem. The next concept to define is that of a House. The result is a network with five paths. With C16 added, only one solution remains. We can now see the solution.

Alternative Sleep Cycles: You Don't Really Need 6-8 Hours! Most people only think that there is one way to sleep: Go to sleep at night for 6-8 hours, wake up in the morning, stay awake for 16-18 hours and then repeat. Actually, that is called a monophasic sleep cycle, which is only 1 of 5 major sleep cycles that have been used successfully throughout history. The other 4 are considered polyphasic sleep cycles due to the multiple number of naps they require each day. How is this possible? How is this healthy? Well the most important of every sleep cycle is the Stage 4 REM (Rapid Eye Movement) sleep, which has been shown to provide the benefits of sleep to the brain above all other stages of sleep. This way, you still get the benefits of 8 hours of sleep without wasting all of the time it takes to get to REM cycles, resulting in a much more efficient sleep cycle. Uberman Cycle: 20 to 30 minute naps every 4 hours, resulting in 6 naps each day. Everyman Cycle: One longer “core” nap that is supplemented with several 20-30 minute naps. Dymaxion Cycle:

Polyphasic Sleep Log – Day 1 I’ve completed my first day on the polyphasic sleep schedule, napping for 20-30 minutes every four hours. It’s been almost 36 hours since I last awoke from a full night’s sleep. “Day” is a relative term on this schedule, since the daytime sleeping schedule is no different than the nighttime one. No serious problems thus far aside from some fatigue, lower concentration, and occasional sleepiness. Yesterday seemed tougher than it should have been, as I experienced some tiredness even though I was initially getting more sleep than usual by beginning the nap schedule after having a regular night’s sleep. Last night was semi-difficult, with lots of sleepiness and fatigue between the 1am and 5am naps. 5am was my normal waking time. Things became easier once I made it past the 9am nap, and I felt alert enough to pump out a podcast. I’ve received some advice-filled emails from people who’ve previously tried polyphasic sleep.

100,000 Stars What makes a hero? - Matthew Winkler The Hero Archetype in Literature, Religion, and Popular Culture: (along with a useful PowerPoint presentation teachers can download at this URL: )Maricopa Center for Learning and Instruction (users embark on their own hero's journey): American Masters Lesson from PBS for Teachers on George Lucas, the Power of Myth, and the Hero's Journey: an interactive approach to the Hero's Journey: of course, information about Joseph Campbell's works on the subject, on the Joseph Campbell Foundation site:The Hero With A Thousand Faces Hero's Journey (semi-biographical film): Hakula: Learn the Natural State of 'Fearlessness' The Natural Fear-Free State of Calm… Hakula, is the natural state of optimal human performance. It is the opposite of the tunnel-vision-fear state many have experienced, because it creates a feeling of calm, and enables the greatest perspective and flexibility of behavior and response. It is so powerful it is one of the key tools we teach our one-on-one clients in our VIP program. How to Practice HakulaPick a spot on the wall, somewhere higher than eye level, around the center of your field of vision. (This state of focus-with-peripheral-awareness was named ‘Hakula’ by the ancient people of Hawaii). When to use Hakula Hakula is perfect for the kinds of situations in which you used to experience fear because it shifts the mind into a state where it is ‘contextually all-aware’. Typically with our clients, we find that if clients think about a problem, then shift into Hakula, the problem immediately seems trivial.