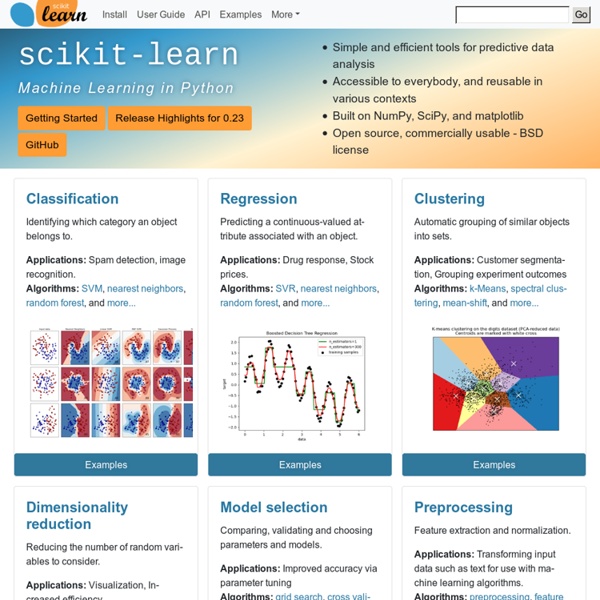 "We use scikit-learn to support leading-edge basic research [...]" "I think it's the most well-designed ML package I've seen so far." "scikit-learn's ease-of-use, performance and overall variety of algorithms implemented has proved invaluable [...]." "For these tasks, we relied on the excellent scikit-learn package for Python." "The great benefit of scikit-learn is its fast learning curve [...]" "It allows us to do AWesome stuff we would not otherwise accomplish" "scikit-learn makes doing advanced analysis in Python accessible to anyone."

Meet the algorithm that can learn “everything about anything” The most recent advances in artificial intelligence research are pretty staggering, thanks in part to the abundance of data available on the web. We’ve covered how deep learning is helping create self-teaching and highly accurate systems for tasks such as sentiment analysis and facial recognition, but there are also models that can solve geometry and algebra problems, predict whether a stack of dishes is likely to fall over and (from the team behind Google’s word2vec) understand entire paragraphs of text. (Hat tip to frequent commenter Oneasum for pointing out all these projects.) One of the more interesting projects is a system called LEVAN, which is short for Learn EVerything about ANything and was created by a group of researchers out of the Allen Institute for Artificial Intelligence and the University of Washington. One of them, Carlos Guestrin, is also co-founder and CEO of a data science startup called GraphLab.

Computer Networking : Principles, Protocols and Practice Computer Networking : Principles, Protocols and Practice (aka CNP3) is an ongoing effort to develop an open-source networking textbook that could be used for an in-depth undergraduate or graduate networking courses. The first edition of the textbook used the top-down approach initially proposed by Jim Kurose and Keith Ross for their Computer Networks textbook published by Addison Wesley. CNP3 is distributed under a creative commons license. The second edition takes a different approach. The new features of the second edition are : The second edition of the ebook is now divided in two main parts The first part of the ebook uses a bottom-up approach and focuses on the principles of the computer networks without entering into protocol and practical details.

marioai - Mario AI Benchmark. AI and Machine Learning Experiments based on Super Mario Bros. Experiments in applying evolutionary algorithms, neural networks and other AI/CI/ML algorithms to Super Mario Bros. MarioAI is a benchmark for machine learning and artificial intelligence based on Super Mario Bros. Check out the running Mario AI Championship 2010 at ! NEW: Turing test track on CIG 2012 Coming! TextBlob: Simplified Text Processing — TextBlob 0.6.0 documentation Release v0.8.4. (Changelog) TextBlob is a Python (2 and 3) library for processing textual data. COC131 Data Mining, Tuotorials Weka "The overall goal of our project is to build a state-of-the-art facility for developing machine learning (ML) techniques and to apply them to real-world data mining problems. Our team has incorporated several standard ML techniques into a software "workbench" called WEKA, for Waikato Environment for Knowledge Analysis. With it, a specialist in a particular field is able to use ML to derive useful knowledge from databases that are far too large to be analysed by hand. WEKA's users are ML researchers and industrial scientists, but it is also widely used for teaching." Tutorial 01 (13/02/09)

Twitter Data Analytics Published by Springer Shamanth Kumar, Fred Morstatter, and Huan Liu Data Mining and Machine Learning Lab School of Computing, Informatics, and Decision Systems Engineering Arizona State University Social media has become a major platform for information sharing. Due to its openness in sharing data, Twitter is a prime example of social media in which researchers can verify their hypotheses, and practitioners can mine interesting patterns and build realworld applications. This book takes a reader through the process of harnessing Twitter data to find answers to intriguing questions.

7 Major Players In Free Online Education By Jennifer Berry Imagine a world where free, college-level education was available to almost everyone. Believe it or not, you're living in that world right now. Online education has been around for decades, but in the past couple of years, interest has spiked for massive open online courses, otherwise known as MOOCs, according to Brian Whitmer, co-founder of Instructure, an education technology company that created the Canvas Network, a platform for open online courses. "Since 2012, MOOCs have caught the attention of the educational world due to their potential to disrupt how education is delivered and open up access to anyone with an Internet connection," Whitmer explains.

neural network artificial intelligence java simulation software development en - Source Codes Search Engine - HackChina sponser links: neural network artificial intelligence java simulation software development environment System modeling and identification based on BP neural network prediction and simulation of MATLAB programs (Graph - Matlab) - Based on BP neural network on with noise of second-order sys ... Pupil Pupil is an eye tracking hardware and software platform that started as a thesis project at MIT. Pupil is a project in active, community driven development. For noncommercial use, the hardware is accessible, hackable, and affordable. The software is open source and written in Python and C where speed is an issue.

Octave GNU Octave is a high-level interpreted language, primarily intended for numerical computations. It provides capabilities for the numerical solution of linear and nonlinear problems, and for performing other numerical experiments. It also provides extensive graphics capabilities for data visualization and manipulation. Octave is normally used through its interactive command line interface, but it can also be used to write non-interactive programs. The Octave language is quite similar to Matlab so that most programs are easily portable. Octave is distributed under the terms of the GNU General Public License.