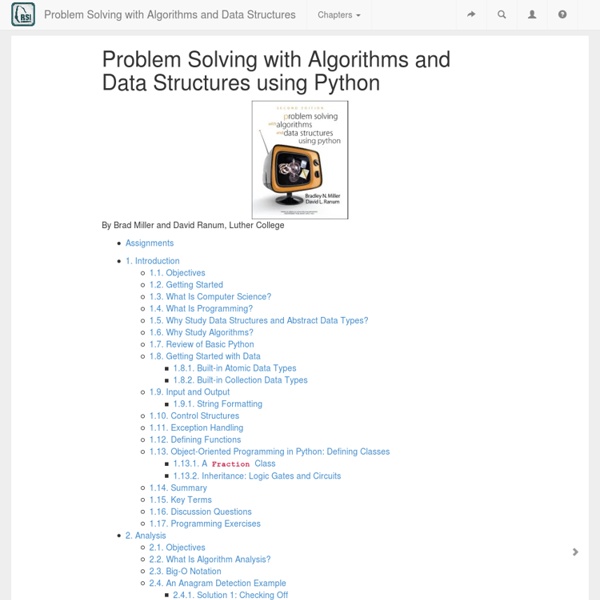 Runestone Interactive Online Python Courses & Tutorials | LearnStreet Argument Is a value provided to a function when the function is called. This value is assigned to the corresponding parameter in the function. Syntax function_name(argument1, argument2, ...): #Function definition Example def sum(a,b): #a & b are two arguments in sum function s=a+b return s Assignment Assignment operator assigns the value to an object, it assigns from right to left. x = 10 # Integer value. x = "John" # String with double quote. x = 'Jack' # String with single quote.# String can be denoted by either a single quote or double quote.x = 45.50 #Float value. The type of a variable depends upon the value assigned. Bytecode Is an intermediate language for the Python Virtual Machine within the interpreter. Class A class is a construct that is used to create instances of itself – referred to as class instances, class objects, instance objects or simply objects. class Class_name: "class documents " #class definition includes data variables, methods, and class Output Code Comments Dictionary break

Learn Python - Free Interactive Python Tutorial Python Cost Model - 6.006 Wiki From 6.006 Wiki Python is a high-level programming language, with many powerful primitives. Analyzing the running time of a Python program requires an understanding of the cost of the various Python primitives. For example, in Python, you can write: where L, L1, and L2 are lists; the given statement computes L as the concatenation of the two input lists L1 and L2. Our goal in this section is to review various Python primitive operations, and to determine bounds and/or estimates on their running times. The Python implementation code base is here. Python Running Time Experiments and Discussion The running times for various-sized inputs were measured, and then a least-squares fit was used to find the coefficient for the high-order term in the running time. The least-squares fit was designed to minimize the sum of squares of relative error, using scipy.optimize.leastsq. The machine used was an IBM Thinkpad T43p with a 1.86GHz Pentium M processor and 1.5GB RAM. Cost of Python Integer Operations

Online Python Tutor - Learn programming by visualizing code execution - Vimperator Google Python Style Guide No whitespace inside parentheses, brackets or braces. No whitespace before a comma, semicolon, or colon. Do use whitespace after a comma, semicolon, or colon except at the end of the line. Yes: if x == 4: print x, y x, y = y, x No: if x == 4 : print x , y x , y = y , x No whitespace before the open paren/bracket that starts an argument list, indexing or slicing. Yes: dict['key'] = list[index] No: dict ['key'] = list [index] Surround binary operators with a single space on either side for assignment (=), comparisons (==, <, >, ! Don't use spaces around the '=' sign when used to indicate a keyword argument or a default parameter value. Yes: def complex(real, imag=0.0): return magic(r=real, i=imag) No: def complex(real, imag = 0.0): return magic(r = real, i = imag) Don't use spaces to vertically align tokens on consecutive lines, since it becomes a maintenance burden (applies to :, #, =, etc