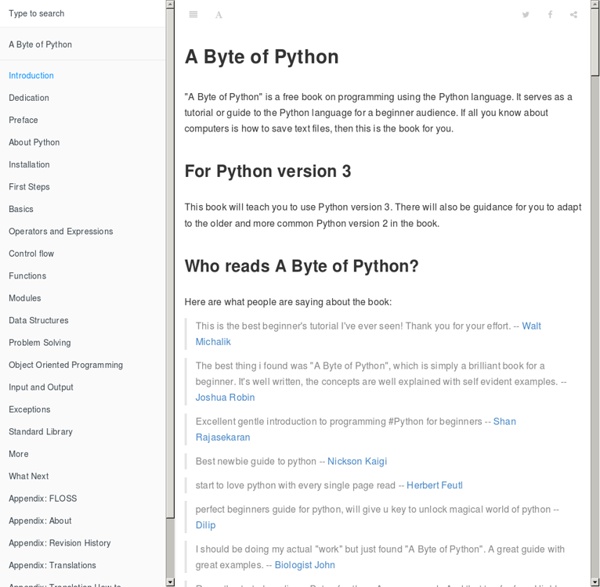 PLEAC-Python Following the Perl Cookbook (by Tom Christiansen and Nathan Torkington, published by O'Reilly) spirit, the PLEAC Project aims to gather fans of programming, in order to implement the solutions in other programming languages. In this document, you'll find an implementation of the Solutions of the Perl Cookbook in the Python language. The latest version of Python is 2.4 but users of 2.3 and 2.2 (and in some cases earlier versions) can use the code herein. Users of 2.2 and 2.3 should install or copy code from utils.py ( [the first section provides compatability code with 2.4] Users of 2.2 should install optik ( [for optparse and textwrap] Where a 2.3 or 2.4 feature is unable to be replicated, an effort has been made to provide a backward-compatible version in addition to one using modern idioms.

codelike So you've decided to learn Python. Maybe you've already taken a look at the Python site. But where to begin? Are there good books for learning? So, I'd like to help you getting started with Python quickly. Which Python Version? Perhaps you've noticed already: There are two slightly incompatible Python versions out there: 2.7: The 2.x line has been in active use for years. Which one to start with, then? you want to use certain libraries right now and they don't work under 3.x yet.you don't know which libraries you need, but it might be lots of different ones.you want to work with a web framework. Go with Python 3.2, if: you want to use the language for one specific task and the library you need is already ported to Python 3.you just want to learn the language itself and there's no immediate requirement for 3rd party libraries. When in doubt, pick whichever one - it won't be difficult to switch later. Where's the documentation? The Python Tutorial (2.7 or 3.2). Books Online Python Exercises

Ultimate Python Ebook Collection | Open Hacking Niall O'Higgins, "MongoDB and Python: Patterns and processes for the popular document-oriented database" O'Reilly Media | 2011-09-30 | ISBN: 1449310370 | 68 pages | PDF | 4,5 MB Learn how to leverage MongoDB with your Python applications, using the hands-on recipes in this book. You get complete code samples for tasks such as making fast geo queries for location-based apps, efficiently indexing your user documents for social-graph lookups, and many other scenarios. This guide explains the basics of the document-oriented database and shows you how to set up a Python environment with it. Learn how to read and write to MongoDB, apply idiomatic MongoDB and Python patterns, and use the database with several popular Python web frameworks. You’ll discover how to model your data, write effective queries, and avoid concurrency problems such as race conditions and deadlocks. The recipes will help you: Download About the Book info Download pdf | 362 pages | 4.4 Mb Sales page: Download

Python for Newbies – Part1 « An alien’s viewpoint Python for Newbies – Part1 January 26, 2011 Posted by rm42 in Computers, Python. trackback Python is a computer programming language created initially by Guido Van Rossum, who released it to the world as an “Open Source” “Free”program. It has since then been progressively improved by the contributions of hundreds of computer programmers around the world. There are many computer programming languages in existence. If you are using Linux, Python should already be installed, most likely with the right version for this tutorial. Python programs run with the aid of an “interpreter”. The interpreter can be run directly in what is called the “Interactive Command Line”. Most Python programs, however, are written with some type of text editor, saved as plain text files with a .py extension, and run as an independent process. First of all, what is a “program”? Lets enter Python’s interactive mode by opening the Terminal application (or Command Prompt) and enter the following command: python Numbers

swfk - Snake Wrangling for Kids (Learning to Program with Python) SWFK has been completely rewritten and updated, with new chapters (including developing graphical games), and new code examples. It also includes lots of fun programming puzzles, and illustrations, to help cement the learning. Published by No Starch Press, and available here: Python for Kids @ Amazon.com. Also more info can be found here. "Snake Wrangling for Kids" is a printable electronic book, for children 8 years and older, who would like to learn computer programming. There are 3 different versions of the free book (one for Mac, one for Linux and one for Windows). There are editions in French (see swfk-fr), Spanish (see swfk-es), German (see swfk-de), Bengali (see swfk-bn) and an Italian version in progress (see swfk-it). This version licensed under the Creative Commons: Please note: this is a self-edited manuscript (with help from feedback from the Python community), and as such may not be quite as polished as I would like.