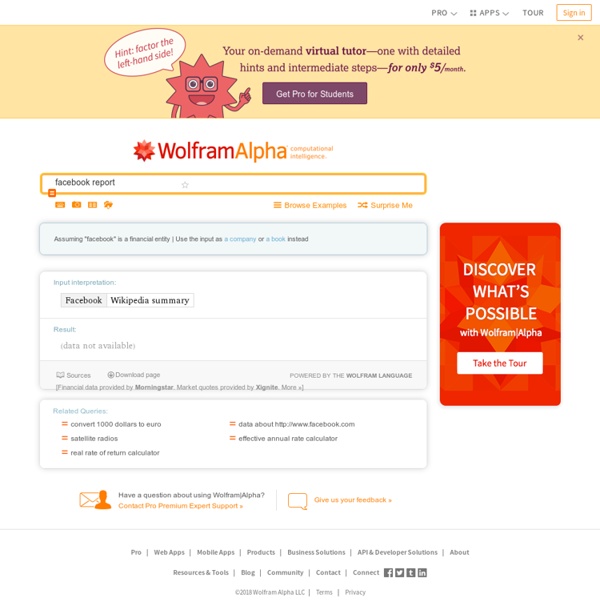 10 Private Social Networks for Discreet Interaction You're sick of all the mainstream social networks. The constant baby pictures, your oh-so-in-love couple friends, your creepy co-worker who Likes every single one of your photos. If you want to trim down your social networking, or if you would rather not friend your Aunt Josephine or your boss on Twitter and Facebook, consider switching to a more private network. These 10 private social networks ensure you always have a space to share photos, collaborate on a group project for work or school, or organize a carpool to this week's neighborhood softball game. 1. Everyme 100 Websites To See Before You Die (Part 1) - Page 2 Shape the Hive What are humans, really, but so many bees, buzzing away? That’s the question (we think) asked by Shape The Hive, a visual “experiment in digital collaboration.” In more concrete terms, Shape The Hive is a massive, color-coded hex grid, where anyone can use a sort of virtual kaleidoscope to fill in hexes with distorted images or videos.

We're All Narcissists Now, And That's A Good Thing You open up your Facebook newsfeed to a deluge of engagement ring photos, political slap-fights, and--horror--your little cousin's selfies from the Justin Bieber concert. But your attempt to escape to Twitter is quickly thwarted by a litany of "Just woke up!" and "having breakfast #allaboutme" and "Got in the wrong line at the grocery store again!" 34 Photoshop Tutorials That Will Leave You Looking Like A Pro Design This time we are bringing you a lot of Photoshop tutorials on all sorts of topics. It's meant to be a good collection for those who aren't quite pro yet, but want to be.

Social Envy - Study Finds Facebook Causes Depression And Isolation BERLIN - Social networks like Facebook make many things easier. You can find out right away if Alex got the job or not, and you can not only read about Marie’s vacation, but you can also see all those pictures of her on the beach, too. There’s also a downside to this. Researchers have conducted tests that show that people who spend a lot of time scrolling on Facebook are more socially isolated and more frequently depressed than those who do not. The question, of course, poses itself: are lonely people more drawn to social networks – or does constant surfing result in loneliness over time? While it wasn’t able to answer the question conclusively, a joint research study conducted by Berlin’s Humboldt University and the Darmstadt’s Technical University did however reveal that spending time on social networks could lead to negative feelings.

Consumer Surveys: Case Studies PrideBites learns which dog toy features matter most to owners The four founders of PrideBites first knew they were onto something when their box of 50 trojan-shaped dog toys sold out in under an hour at a USC football game. “They were so different and colorful, but the stitching was still very high quality,” says co-founder Steven Blustein. “It became clear that there is demand for dog toys that hit the sweet spot between design and durability.” The Conversation Prism: Making Sense of Social Media Surprise. Not all social media is the same. Brian Solis and JESS3 break new ground with an illustrative taxonomy that unravels some of the mystery concerning the use of social media. The power of their contribution lies in the distinctions implicit in the categories found in The Conversation Prism (click the diagram below). Each category around the “wheel” represents a different type of conversation. By implication, each type of conversation serves a distinctive business purpose.

Pros & Cons of Snagit - TopTenREVIEWS Perfection is hard to achieve in this world, but Snagit comes close. That's because this screen capture software offers the most features and options of all its competition. Whether you're looking to capture images, color values, video games or video clips, Snagit delivers. It dominates in the field of screen capture software. Facebook likes can reveal private personality traits, according to study It's no secret that Facebook is a goldmine for advertisers seeking to target specific demographics — but it may surprise you to discover just how much of your personality is revealed by simple activities there. Researchers from the University of Cambridge and Microsoft Research have been quietly (and innocuously) collecting data on Facebook user likes and personality traits using applications like "MyPersonality" on Facebook, and now they're showing how the data can be used. Simply by tracking what things you've liked on Facebook, the researchers say they're able to determine things like your sex, ethnicity, political leanings, and religion with accuracies over 80 percent. The findings were published today in the Proceedings of the National Academy of Sciences, based on data that you can dig into yourself on a public wiki.

Best Free SEO / Online Marketing Tools This page presents the most complete list of free SEO tools you will ever find. There are lots of things to learn and lots of things you need to do in order to start and grow your online business. In order to properly develop your business (and save a ton of time), you need to get and use many SEO softwares and Internet Marketing tools. Unfortunately, most of these tools cost a lot of money, and you probably don’t have so much cash to spend on advanced SEO tools. I was there before, so I know exactly what you’re going through. I did a lot of research online to find solutions to use the same tools as the experts at a fraction of the cost, and after several months of scouting and testing, I have put together a list of free SEO tools that I now use on a regular basis to grow my business.

What your Facebook 'likes' really say about you - tech - 11 March 2013 We are already aware that our every move online is tracked, aggregated and analysed. But you couldn't have known how much Facebook can learn about you from the smallest of social interactions – a "like". Researchers from the University of Cambridge designed a simple machine-learning system to predict Facebook users' personal information and traits based solely on which pages they had liked. "We were completely surprised by the accuracy of the predictions," says Michal Kosinski, lead author on the paper in PNAS (DOI: 10.1073/pnas.1218772110). Kosinski and his colleagues built the system by scanning likes for a sample of 58,000 volunteers, and matching them up with other profile details such as age, gender and relationship status.

3 Hacks for Firefox That Will Double Your Internet Browsing Speed - Gnoted.com There are many people out there complaining about the Firefox RAM Memory Bug. Lets get it straight. It’s not a bug. It’s part of the cache feature. This ‘feature’ is how the pages are cached in a tabbed environment. To improve performance when navigating (studies show that 39% of all page navigations are renavigations to pages visited less than 10 pages ago, usually using the back button), Firefox implements a Back-Forward cache that retains the rendered document for the last five session history entries for each tab.

CNN: Unlike - Why I'm leaving Facebook I used to be able to justify using Facebook as a cost of doing business. As a writer and sometime activist who needs to promote my books and articles and occasionally rally people to one cause or another, I found Facebook fast and convenient. Though I never really used it to socialize, I figured it was okay to let other people do that, and I benefited from their behavior. I can no longer justify this arrangement. 17 Ways To Optimise Your Facebook Brand Page If you think back to the start of the year, Facebook has changed drastically compared to what it was before. The introduction of Timeline, new mobile apps, the introduction of sponsored stories and the tweaks and changes made to Edgerank meant that keeping up to date has been challenging to say the least. It's been a hectic year, but among all the changes that have happened, we are seeing more consistency in how the site functions.