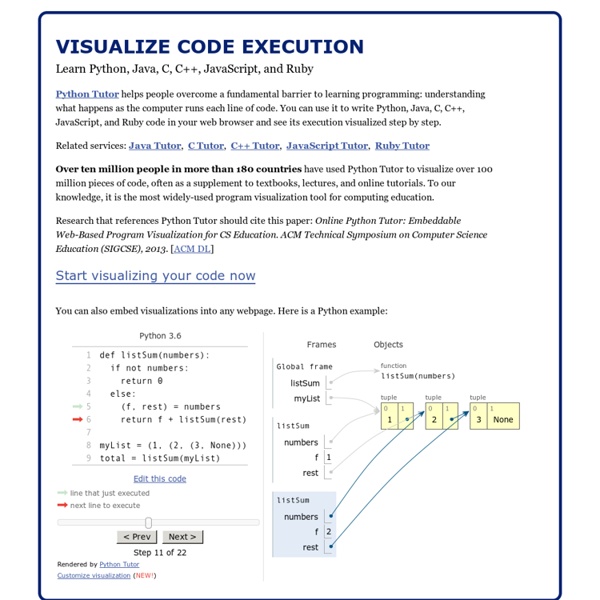 Google's Python Class - Educational Materials Welcome to Google's Python Class -- this is a free class for people with a little bit of programming experience who want to learn Python. The class includes written materials, lecture videos, and lots of code exercises to practice Python coding. These materials are used within Google to introduce Python to people who have just a little programming experience.

Ruby vs Python: Choosing Your First Programming Language: Course Report (updated August 2016) So you've decided to switch careers and jump into tech. Congrats! Now, you're probably wondering which programming language you should learn first! Style Guide for Python Code This document gives coding conventions for the Python code comprising the standard library in the main Python distribution. Please see the companion informational PEP describing style guidelines for the C code in the C implementation of Python [1]. This document and PEP 257 (Docstring Conventions) were adapted from Guido's original Python Style Guide essay, with some additions from Barry's style guide [2].

Enigma Simulator This software is an exact simulation of the 3-rotor Wehrmacht (Heer and Luftwaffe) Enigma, the 3-rotor Kriegsmarine M3, also called Funkschlussel M, and the famous 4-rotor Kriegmarine M4 Enigma cipher machine, used during World War II from 1939 until 1945. The sim has a very authentic feeling with its hands-on approach: you can select between the three models, actually lift out and insert different rotors, adjust their ring setting and set up the plugboard. The internal wiring of all rotors is identical to those that were used by the Wehrmacht and Kriegsmarine. This simulator is therefore fully compatible with the various real Enigma models and you can decrypt authentic wartime messages or encrypt and decrypt your own messages. The program comes with a very complete 22 page helpfile, containing the manual, some original messages, the history of Enigma and all technical details of the machine. The simulator also has a picture gallery of Enigma machines.

Supercharge JavaScript development in Atom – Satyajit Sahoo – Medium I know, editors are just tools, and the real power is within the programmer. The editor still plays a major role in writing good code. I don't know about you, but even though I can probably write a small program using nano, it'll be damn difficult to get it right the first time. Yeah, the good ol' typos, missing parentheses and all. And it'll probably be much slower than having the luxury of autocomplete provided in the editor. So, how do we choose a good code editor which doesn't get in our way and help us write code faster?

Python's IDLE editor: How to Use - by Dr A. Dawson Copyright Dr A Dawson 2005 - 2016 This file is: Python_Editor_IDLE.htm First created: Tuesday 8th March 2005, 7:28 PT, ADLast updated: Saturday 31st January 2015, 9:05 PT, AD This page explains how to run the IDLE integrated development environment (IDE) for editing and running Python 2.x or Python 3 programs. The IDLE GUI (graphical user interface) is automatically installed with the Python interpreter. IDLE was designed specifically for use with Python.

Supporting Non-ASCII Identifiers This PEP suggests to support non-ASCII letters (such as accented characters, Cyrillic, Greek, Kanji, etc.) in Python identifiers. Python code is written by many people in the world who are not familiar with the English language, or even well-acquainted with the Latin writing system. Such developers often desire to define classes and functions with names in their native languages, rather than having to come up with an (often incorrect) English translation of the concept they want to name. By using identifiers in their native language, code clarity and maintainability of the code among speakers of that language improves. For some languages, common transliteration systems exist (in particular, for the Latin-based writing systems).

Overview — Sphinx 2.1.0+/a22461528 documentation What users say: “Cheers for a great tool that actually makes programmers want to write documentation!“ Sphinx is a tool that makes it easy to create intelligent and beautiful documentation, written by Georg Brandl and licensed under the BSD license. It was originally created for the Python documentation, and it has excellent facilities for the documentation of software projects in a range of languages.