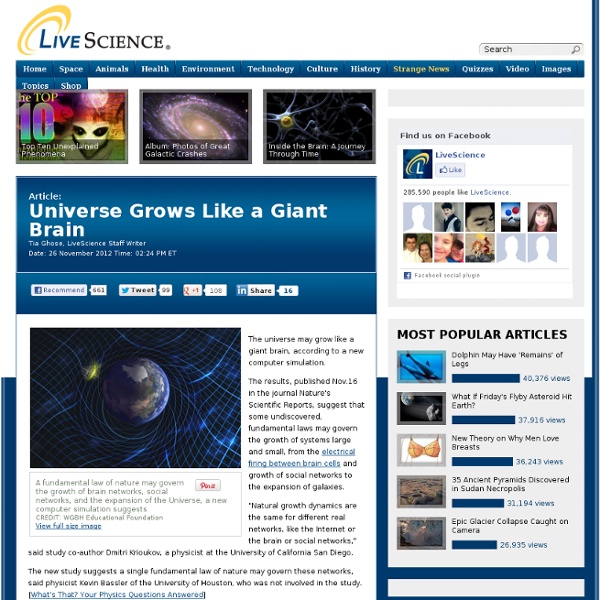 The universe may grow like a giant brain, according to a new computer simulation. The results, published Nov.16 in the journal Nature's Scientific Reports, suggest that some undiscovered, fundamental laws may govern the growth of systems large and small, from the electrical firing between brain cells and growth of social networks to the expansion of galaxies. "Natural growth dynamics are the same for different real networks, like the Internet or the brain or social networks," said study co-author Dmitri Krioukov, a physicist at the University of California San Diego. The new study suggests a single fundamental law of nature may govern these networks, said physicist Kevin Bassler of the University of Houston, who was not involved in the study. [What's That? "At first blush they seem to be quite different systems, the question is, is there some kind of controlling laws can describe them?" By raising this question, "their work really makes a pretty important contribution," he said. Related:  from metaphor to model...

The Omega Point [Jason Silva] How Rare Black Dahlias Get Their Color Of the 20,000 varieties of dahlia flowers, only 10 to 20 kinds are black in color. Now researchers say they've solved the molecular mystery of how these rare flowers get their dark hues. Flower color in dahlias is determined by a mixture of plant metabolites called flavonoids. Scientists already know that red dahlias' tones come from high concentrations of anthocyanins, flavonoids that are responsible for the color of blueberries, blue corn, blackberries and other fruits and vegetables. White dahlias, meanwhile, are short on anthocyanins but contain large amounts of flavones, flavonoids that are colorless themselves but can alter the shade of a flower by interacting with pigments like anthocyanin. Researchers from the Vienna University of Technology in Austria analyzed the pigments, enzyme activity and gene expression in samples of black dahlias to study their deep burgundy hues. The research is detailed online Nov. 23 in BioMed Central's journal BMC Plant Biology.

(65) Facebook The Future of Intelligence Cadell Last, Adam Ford By Cadell Last Human intelligence, like everything related to biological systems, is an evolving phenomenon. It has not been static in the past, and will not persist in its current form into the future. The human-version of intelligence has made our species the most powerful agent of change ever produced by the earth's biosphere. Clearly the human ability to engage in these novel behaviours is dependent on the human brain. a comparatively short period of evolutionary time, hominid brain size exploded. Before the emergence of our genus, apes had existed for approximately 18 million years. Recent studies, like those conducted on the 2.5 million-year-old Australopithecus africanus skull known as Taung Child suggest that human-like brain growth had already started in the precursor species to Homo. The Explosion Evolutionary processes can occur in short bursts of hundreds of thousands of years, and sometimes tens of thousands of years. Global Brain

Pluto Atmosphere Larger Than Thought, Study Shows A new simulation of Pluto's upper atmosphere shows that it extends so far from the planet that stray molecules may be deposited on its largest moon, Charon. The new model predicts that Pluto's atmosphere can extend as far as 6,456 miles (10,390 kilometers) into space, or about 4.5 times the diameter of Pluto. That's more than halfway to Charon. "That is amazing, from my perspective," said Justin Erwin, the lead author of the paper and a Ph.D. student at the University of Virginia. Researchers combined two previously known models of Pluto's atmosphere to better estimate the escape rate of molecules into space. "Our [calculated escape rate] is a little bit smaller, but the small change in the escape rate causes a large change in the structure of the atmosphere," Erwin added. Fire and ice Pluto's tenuous atmosphere is mainly composed of methane, nitrogen and poisonous carbon monoxide that likely comes from ice on the dwarf planet's surface. Pluto's last close approach to the sun was in 1989.

Last Week At Science-Based Medicine Here is a recap of the stories that appeared last week at Science-Based Medicine, a multi-author skeptical blog that separates the science from the woo in medicine. NIH funds training in behavioral intervention to slow progression of cancer by improving the immune system (James Coyne) The NIH is funding training in psychoneuroimmunological interventions for cancer, questionable treatments based on flawed studies. This highlights the pseudoscience and heavy-handed politics in this field. There is no credible evidence that any psychosocial intervention reduces risk of cancer recurrence or improves survival. Andrew Weil/AAFP Article Rejected by Slate (Harriet Hall) Slate magazine asked Dr. CAM and Creationism: Separated at Birth? Trackback(0)

Why the Global Brain needs a Therapist The idea that the world itself could be considered an overarching form of mind can trace its roots deep into the religious longings of pantheism- the idea that the universe itself is God, or the closest thing we will ever find to our conception of God. In large part, I find pantheists to be a noble group. Any club that might count as its members a philosophical giant like Spinoza, a paradigm shattering genius such as Einstein, or a songbird like Whitman I would be honored to belong to myself. But alas, I have my doubts about pantheism- at least in particular its contemporary manifestation in the form of our telecommunications and computer networks being granted the status of an embryonic “global brain”. Key figures in this idea that our communications networks might constitute the neural passageways of a great collective brain predate the Internet by more than a generation. We are faced with a harmonized collectivity of consciousness, the equivalent of a sort of super-consciousness.

3D-Printing a Low-Cost Satellite Seeking a low-cost way to launch their experiments into space, a team of scientists has designed a space-ready, 3-D printed CubeSat. CubeSats are standardized, tiny satellites, often only 10 centimeters (3.9 inches) on each side and weighing less than 1.33 kilograms (just under 3 lbs). They are so small that they have room for only a few sensors, and burn up in the Earth's atmosphere after just a few months. Kits cost under $10,000, which is considered cheap for the space industry. In 3D printing, a computer-directed nozzle "prints" a three-dimensional object in plastic. Using 3-D printers, researchers can automate the CubeSat production process. [NASA Turns to 3D Printing for Self-Building Spacecraft] The CubeSat’s sensors and computer chips, of course, weren't printed in the lab, and the team had to add a small, metal heat sink to disperse the electronic components' heat. The final product passed its tests with flying colors.

The Skeptics Society & Skeptic magazine Pathway to the Global Brain (part 1/5): Introduction to Cybernetics What is the nature of intelligence? If you share this, please use the hashtags #GlobalBrain and/or #LongReads The Global Brain is a concept representing the hypothesized emergence of a higher-level distributed intelligence caused by human-machine communication networks on the Internet. Leading research and model-building on this phenomenon is occurring at the Global Brain Institute in Belgium. The following blog series is in preparation for my Ph.D. work on the Global Brain. I hope you enjoy the groundwork for this work (below). Biological intelligence is a fleeting phase in the evolution of the universe. – Paul Davies The human story is a story about reaching towards the Sun. – Me Imagine it is the year 3,000 C.E. If you are like me, this would be quite a strange future. In a 2007 Long Now Foundation article by computer scientist Vernor Vinge, he proposed a few thought experiments about our future. 1) “The Wheel of Time” scenario – humanity experiences series of endless cycles. City / Neuron

Balloon Test Shows Space Tourism on the Horizon | Zero 2 Infinity Bloon Not all space tourism is rocket science. A newly successful test of a balloon could allow paying human customers to enjoy stunning Earth views and the weightless astronaut experience by 2014. The test balloon carried a humanoid robot up to an altitude of almost 20 miles (32 kilometers) on Nov. 12 — just a few miles shy of where skydiver Felix Baumgartner leaped from during his "space dive" in October. Startup Zero 2 Infinity wants to eventually offer hours of flight time for space tourists to do whatever they want in a near-space environment. "Some people will want to tweet," said Jose Mariano Lopez-Urdiales, founder and CEO of Zero 2 Infinity. The Spanish company already has waitlist customers who paid an early deposit of almost $13,000 (10,000 euros) as the first installment out of a total ticket price of $143,000 (110,000 euros). Flight testing took place at an Air Force base near Virgen del Camino in Spain. The balloon experience Robot test pilots The inner journey

topical index: critical thinking From Abracadabra to Zombies | View All critical thinking The goal of critical thinking is to arrive at the most reasonable beliefs and take the most reasonable actions. We have evolved, however, not to seek the truth, but to survive and reproduce. Critical thinking is an unnatural act. The items below are listed in alphabetical order. 1) several essays I've written on the difficulty of changing minds: Belief Armor, Evaluating Personal Experience, Why Do People Believe in the Palpably Untrue? 2) the following entries: confirmation bias, cognitive dissonance, communal reinforcement, motivated reasoning, backfire effect, memory, and perception deception.