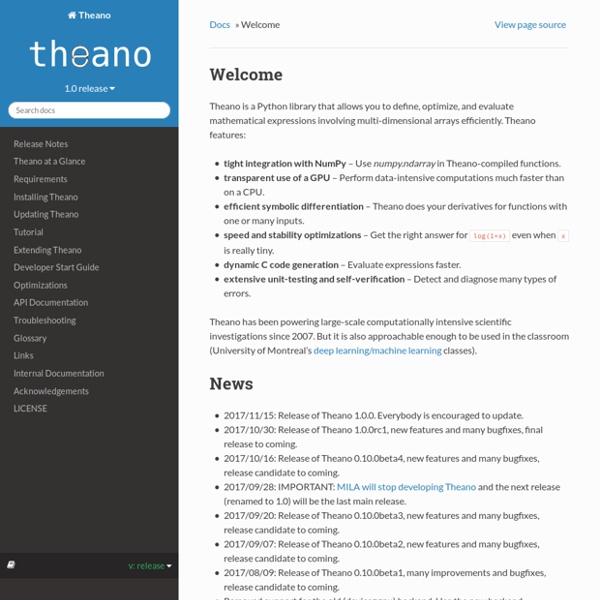 Theano is a Python library that allows you to define, optimize, and evaluate mathematical expressions involving multi-dimensional arrays efficiently. Theano features: tight integration with NumPy – Use numpy.ndarray in Theano-compiled functions.transparent use of a GPU – Perform data-intensive computations much faster than on a CPU.efficient symbolic differentiation – Theano does your derivatives for functions with one or many inputs.speed and stability optimizations – Get the right answer for log(1+x) even when x is really tiny.dynamic C code generation – Evaluate expressions faster.extensive unit-testing and self-verification – Detect and diagnose many types of errors. Theano has been powering large-scale computationally intensive scientific investigations since 2007. But it is also approachable enough to be used in the classroom (University of Montreal’s deep learning/machine learning classes). 2017/11/15: Release of Theano 1.0.0. git clone How do I?

Welcome — Pylearn2 dev documentation Warning This project does not have any current developer. We will continue to review pull requests and merge them when appropriate, but do not expect new development unless someone decides to work on it. There are other machine learning frameworks built on top of Theano that could interest you, such as: Blocks, Keras and Lasagne. Don’t expect a clean road without bumps! Pylearn2 is a machine learning library. Researchers add features as they need them. There is no PyPI download yet, so Pylearn2 cannot be installed using e.g. pip. git clone To make Pylearn2 available in your Python installation, run the following command in the top-level pylearn2 directory (which should have been created by the previous command): You may need to use sudo to invoke this command with administrator privileges. python setup.py develop --user This command will also compile the Cython extensions required for e.g. pylearn2.train_extensions.window_flip. Data path Ian J.

machine learning - Sentiment Analysis model for Spanish By using our site, you acknowledge that you have read and understand our Cookie Policy, Privacy Policy, and our Terms of Service. Sentiment Analysis model for Spanish Ask Question up vote 3 down vote favorite I barely know about Data Analysis tools and techniques, so bare with me if I'm asking something too trivial. I'm looking for a Sentiment Analysis tool to process comments in Spanish. Is there a model/tool that already works with Spanish? I'm language agnostic so it does not matter if it's a Java, Python or even Go code. machine-learning nlp social-network-analysis sentiment-analysis share|improve this question edited May 10 '17 at 4:00 VividD asked Aug 4 '15 at 22:15 mcKain Out of curiosity, have you tried translating to English then using English sentiment analysis? add a comment | 3 Answers active oldest votes up vote 3 down vote The Indico.io API supports Spanish (and Chinese (Mandarin), Japanese, Italian, French, Russian, Arabic, German, English). eg in Python: share|improve this answer A.

Caffe | Deep Learning Framework numexpr - Fast numerical array expression evaluator for Python and NumPy. Please be aware that the numexpr project has been migrated to GitHub. This site has been declared unmaintained as of 2014-01-21. Sorry for the inconveniences. -- Francesc Alted What It Is The numexpr package evaluates multiple-operator array expressions many times faster than NumPy can. Also,numexpr implements support for multi-threading computations straight into its internal virtual machine, written in C. It is also interesting to note that, as of version 2.0, numexpr uses the new iterator introduced in NumPy 1.6 so as to achieve better performance in a broader range of data arrangements. Finally, numexpr has support for the Intel VML (Vector Math Library) -- integrated in Intel MKL (Math Kernel Library) --, allowing nice speed-ups when computing transcendental functions (like trigonometrical, exponentials...) on top of Intel-compatible platforms. Examples of Use Using it is simple: >>> import numpy as np>>> import numexpr as ne >>> a = np.arange(1e6)>>> b = np.arange(1e6) and fast...

Sage - French SymPy Easy threading with Futures To run a function in a separate thread, simply put it in a Future: >>> A=Future(longRunningFunction, arg1, arg2 ...) It will continue on its merry way until you need the result of your function. You can read the result by calling the Future like a function, for example: >>> print A() If the Future has completed executing, the call returns immediately. A few caveats: Since one wouldn't expect to be able to change the result of a function, Futures are not meant to be mutable. The Future only runs the function once, no matter how many times you read it. For more information on Futures, and other useful parallel programming constructs, read Gregory V.

rawdog Download: rawdog-2.19.tar.gz (65K, released 2014-02-02)Signature (about); SHA1 e889ac948f57c8dfdd57506d00365ef2ca96dfed Available through Git (Atom feed of changes):git clone About rawdog rawdog is an RSS Aggregator Without Delusions Of Grandeur. rawdog is designed to be invoked periodically by cron (or a similar task-scheduling mechanism). Written in Python, rawdog is highly customisable and extendable. Full documentation is included in the source package to get you started with rawdog. Dependencies rawdog requires Python 2.6 or later, and feedparser 5.1.2 or later. I'd also strongly recommend installing PyTidyLib, which rawdog can use to generate cleaner output HTML. rawdog is designed to run on POSIX-compliant free operating systems such as Linux and FreeBSD, and requires Unix-like filesystem semantics. rawdog is not supported on proprietary operating systems. Mailing list Packaged versions of rawdog rawdog packages are available for some systems. Plugins

richardkiss/pycoin alyssa frazee Thu 02 January 2014 | -- (permalink) My sister is a senior undergraduate majoring in sociology. She just landed an awesome analyst job for next semester and was told she'll be using some R in the course of her work. She asked me to show her the ropes during winter vacation, and of course I said yes! What better way to while away the days of a Minnesota winter?!1 One catch: the day we planned to work, it turned out we only had an hour of overlapping free time. Challenge accepted. (1) download R and RStudio I'm impressed that RStudio is both accessible/helpful for beginners and useful for experts. (2) console and script The first thing we did after getting set up was type two lines into the console: It wasn't exactly "hello world", but it illustrated some concepts like "assignment" and "variables" and "evaluation"2. The next thing I had my sister do was save those two lines of code in an R script. (3) comments # COMMENTS ARE SUPER IMPORTANT so we learned about them (4) graphics (5) getting help