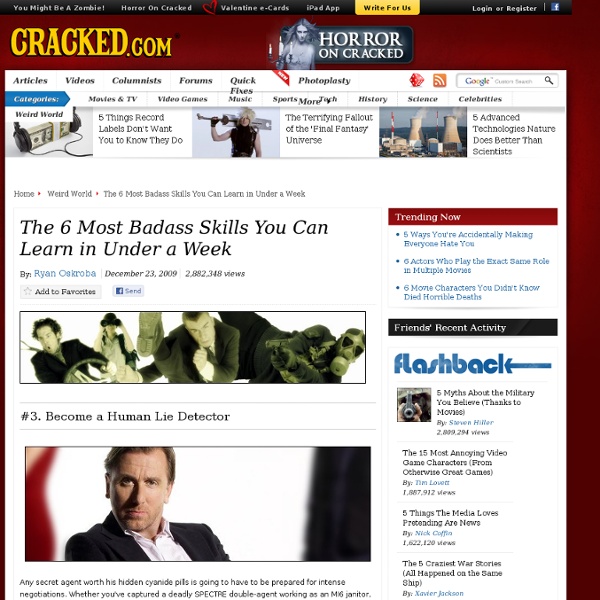 Become a Human Lie Detector Any secret agent worth his hidden cyanide pills is going to have to be prepared for intense negotiations. Whether you've captured a deadly SPECTRE double-agent working as an MI6 janitor, or are just buying a used car, you've got to be able to tell when the enemy is lying through his teeth to you, and how to best disguise the fact that you're lying through your teeth at the same time. Also you can be like that guy in Lie to Me, for the few of you who watch that show. The Coursework: This particular double-oh technique has been cleverly disguised as a business management lecture lasting only a few hours, steeped in the psychology of human information processing and body language. Liar!! Then you can watch as paranoia creeps in from the corners of your mind, slowly replacing lesser human emotions like "trust" and "compassion." In fact, there is a class just for you... We assume this is what Florida's combat training is like. Coins are stupid. Urban Escape and Evasion

New York City’s Hidden Subway Station Deep in the belly of New York’s subway system, a beautiful untouched station resides that has been forgotten for years with only a limited few knowing of its existence. Stunning decoration with tall tiled arches, brass fixtures and skylights run across the entire curve of the station, almost a miniature imitation of Grand Central Station… But it sounds like something straight out of Harry Potter, right? It was opened in 1904, with the hope of making it the crowning glory of the New York subway system in elegant architecture and a place for commemorative plaques to honour the work that had resulted in such a successful underground mass transit system.

Michael Cerdeiros - Cerious Productions Changelog and Updates The following websites were part of the original list but they are either no longer available or have been replaced with better alternatives. HOW TO CHEAT AT EVERYTHING Over lunch with Simon Lovell, a fascinating former card shark, Allison Schrager learns all sorts of things about how swindlers operate ... Special to MORE INTELLIGENT LIFE "I can spot someone's weakness a mile away. In any room I can pick out the best target," says Simon Lovell, reformed con artist and famed magician, when asked over lunch about the root of his talents. "Take that woman over there." He motions across the room towards a lady speaking to a man engrossed in his menu--"vulnerable, needy, looking for attention from the man she is with, but he won't give it to her.

Wind Power Generators Annual Output (KWH/year) = 0.01328 (D^2) (V^3) source... Where D^2 is the blade diameter in feet squared, and V^3 is the wind velocity cubed in mph -- this is the year round average wind speed -- see wind maps below. So, a 10 ft diameter wind turbine in 12 mph average winds might produce about (0.01328)(10^2)(12^3) = 2300 KWH/year Note that the energy produced is proportional to the cube of wind speed -- having enough average wind speed is everything in wind turbines. Use the wind maps discussed below and a wind survey of your site to determine if a wind turbine will actually payoff.

CatScan Output from article search CatScan is an external tool that searches an article category (and its subcategories) according to specified criteria to find articles, stubs, images, and categories. It can also be used for finding all articles that belong to two specified categories (the intersection). Make Cool Stuff: Concealing Your Secret Lair by Mindy Holahan on March 7, 2011 To the Batcave! Admit it. You’re prepared should a radioactive accident turn you into a superhero. You have your super name picked out, practiced the intimidating stance that will bring villains to their knees, and you’ve even considered how to combat your primary weakness.

10 Search Engines to Explore the Invisible Web No, it’s not Spiderman’s latest web slinging tool but something that’s more real world. Like the World Wide Web. The Invisible Web refers to the part of the WWW that’s not indexed by the search engines. Most of us think that that search powerhouses like Google and Bing are like the Great Oracle”¦they see everything. Unfortunately, they can’t because they aren’t divine at all; they are just web spiders who index pages by following one hyperlink after the other.

How To Heat Up Your Room Using Just a Candle: This heater is a multi-core steel and ceramic radiator assembly, suspended above the candle on a solid steel stand. The radiator absorbs and concentrates the thermal energy of the candle and converts it into dry radiant space heat. If you burn candles, now you can add their heat to your home or office. There is also an “electric candle” option that uses a 60 watt quartz halogen lamp; that works out to about 6 cents for 10 hours of “burn” time. “Steel has the ability to approach the temperature of its heat source,” says the inventor, “so the solid steel inner core will go as high as 550° Fahrenheit. That high inner temperature is mitigated to a very warm 160° to 180° on the outer surface.