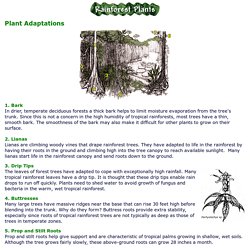 BarkIn drier, temperate deciduous forests a thick bark helps to limit moisture evaporation from the tree's trunk. Since this is not a concern in the high humidity of tropical rainforests, most trees have a thin, smooth bark. The smoothness of the bark may also make it difficult for other plants to grow on their surface.2. LianasLianas are climbing woody vines that drape rainforest trees. Girraween National Park - Geology - The Sculptured Landscape - Weathering - Fracturing following Unloading. Geology of Haytor Rocks, Dartmoor, Devon - Field Guide. A profile caused by the weathering of horizontal joints at Haytor is shown above. 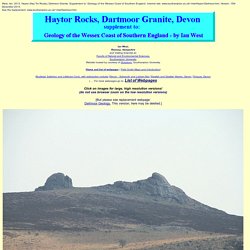 The vague similarity to Easter Island statues results from a sloping weathering profile beneath the joints and then an abrupt overhang caused by harder, less weathered granite immediately above the horizontal joint. This small supplement is primarily intended for use by Environmental Science students studying the River Teign at this locality. This location map and aerial photograph shows the position of Dogmarsh Bridge, near Chagford. Circular walk from Minions to Henwood via the Cheesewring. The walk passes The Hurlers stone circles, the Bronze Age Rillaton barrow where a gold goblet was found, and the stone hut of eccentric stone mason and mathematician Daniel Gumb. 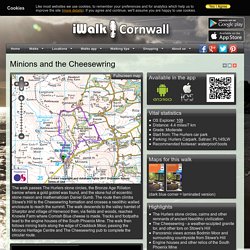 The route then climbs Stowe's Hill to the Cheesewring formation and crosses a neolithic walled enclosure to reach the summit. The walk descends to the valley hamlet of Sharptor and village of Henwood then, via fields and woods, reaches Knowle Farm where Cornish Blue cheese is made. Map for Circular walk from Minions to Henwood via the Cheesewring. History of The Hurlers Stone Circles. The monument, which was excavated in the 1930s, consists of three adjacent stone circles aligned north-east to south-west. 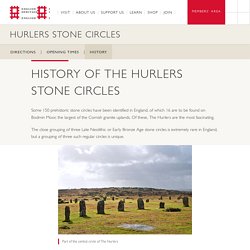 To the west is a pair of outlying upright stones standing close together, known as the Pipers. Of the northern circle 15 original stones are visible, and excavation revealed the buried holes for a further ten, now represented by marker stones. The regular spacing of the stones suggests there would have been five more, giving 30 in all. A strip of granite paving, found in excavation, ran between this and the central circle. The Cornubian Batholith. The granites were intruded towards the close of the Variscan Orogeny over a time period extending from 300 - 275 Ma (late Carboniferous - Permian). 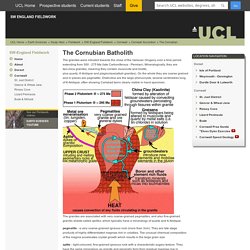 Mineralogically, they are two-mica granites, meaning they contain muscovite and biotite, plus quartz, K-feldspar and plagioclase(alkali granites). On the whole they are coarse grained and in places are pegmatitic. Flying Past - The Historic Environment of Cornwall: Streams of Tin. Streams of Tin Introduction By the thirteenth century the Cornish tin industry was already internationally important. 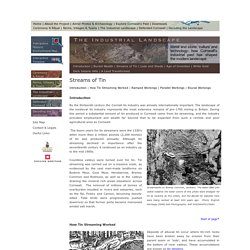 The landscape of the medieval tin industry represents the most extensive remains of pre-1700 mining in Britain. During this period a substantial amount of tin produced in Cornwall came from tin streaming, and the industry provided employment and wealth far beyond that to be expected from such a remote and poor agricultural area as Cornwall. Streamworks on Breney Common, Lanlivery.

The boom years for tin streamers were the 1330’s when more than a million pounds (2,200 tonnes) of tin was produced annually. Countless valleys were turned over for tin. Start of page^ How Tin Streaming Worked Tin streaming in Cornwall was similar to that elsewhere, particularly in the Erzgebirge region of Eastern Europe, where it is well documented by contemporary writers such as Agricola (1556).

Fox Tor - Wikipedia. On the flank of the tor, about 500 m to the north stands Childe's Tomb - according to local legend, the last resting place of Childe the Hunter, an unfortunate traveller who died there during a blizzard.[2] Little Fox Tor, also known as Yonder Tor lies about 500 m. to the east.[1] About a kilometre north-east of the tor lies the swampy land known as Fox Tor Mires. 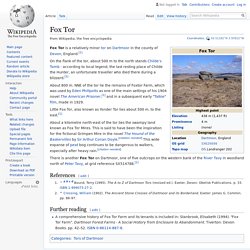 This is said to have been the inspiration for the fictional Grimpen Mire in the novel The Hound of the Baskervilles by Sir Arthur Conan Doyle. [citation needed] This wide expanse of peat bog continues to be dangerous to walkers, especially after heavy rain. [citation needed] Geology of Great Britain - Introduction and maps - by Ian West. West, Ian M. 2012. 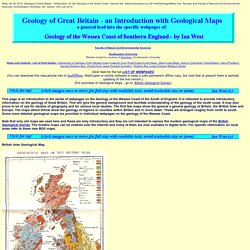 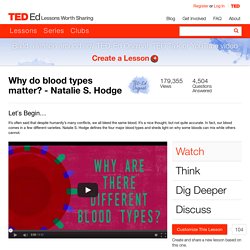 There are other human blood groups that are less common than the ABO blood group. For example, the Bombay Phenotype is a recessive condition in which the precursor of the A or B antigen, the H antigen, is not made. It occurs in about 1 in 10,000 people in India and 1 in million people in Europe. Even though someone inherits the alleles for an A or a B antigen, they can’t make these antigens if they don’t have the instructions on HOW to make them. For more info on the Bombay phenotype, visit this site. There have been other stories of people with extremely rare blood. Interested in learning more about blood? CorpWatch : Environment. Seven ways climate change could kill you (really) What do allergies, heart attacks, salmonella outbreaks, and depression have in common? 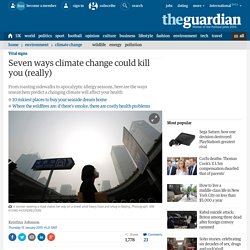 Give up? Well, most Americans don’t know either, according to an October report from the Yale Project on Climate Change Communication. The answer is that they’re all symptoms of a warming planet – just some of the health problems that experts say we can expect as temperatures rise. Science & Environment. Learning English - Home. Global Warming 101. World Library of Science.

DNL SVT. Section européenne. Science - Documentary Network. Teachers TV- Climate Change - The Causes. Green house Effect and Global warming. Greenhouse effect. Finding reliable information about climate science. As with all scientific fields, climate change science relies on the continued questioning and challenging of ideas. Peer-reviewed research The peer-review process provides a mechanism to quality control scientific discourse, and peer-reviewed papers therefore provide a reliable and quality assured source of information on climate change science. Once an article is published in a peer-reviewed journal, its ideas can be challenged or supported by other scientists with peer-reviewed articles of their own. Peer-review ensures that published findings are objective and conform to accepted scientific standards. Without the peer-review system, publication of research findings could be arbitrary and possibly influenced by personal, social or political agendas. Major reports are normally peer-reviewed.