The Economics of Seinfeld 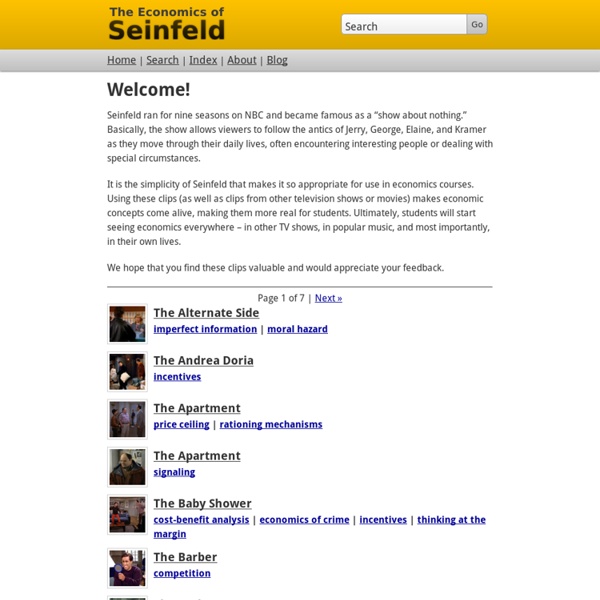 Tutorials on social media A roundup of guides on how to use blogs, Facebook, Twitter & more Here are tutorials our team has created to help show nonprofits, cause organizations, businesses and individuals how to effectively use social media, divided by subject area. For even more, see the Sharing Center, our posts on resources, tools and video interviews. • Social media • Blogs • Facebook • Twitter • Video & multimedia • Fundraising • Mobile • LinkedIn • Google Plus • Pinterest Social media How to build awareness for your campaign Guest post by Mary Joyce March 2013 Tools & tips: Whether you run a nonprofit, a social enterprise or a cause organization, it’s likely that at some point you run up against the barrier we’ve all faced: How do I get the word out about this amazing campaign? Attracting young people to your nonprofit Guest post by Alison Richmond easyfundraising.co.uk March 2013 How to successfully harness your email list for your cause Guest post by Susannah Vila February 2013 Tutorial: Why measure?

Thinking Outside the (Big) Box Illustration by Kelsey Dake Deep thoughts this week: 1. Big retailers classify workers as a "cost." 2. 3. It’s the Economy Adam Davidson translates often confusing and sometimes terrifying economic and financial news. One recent Sunday, however, my wife and I caved. In the last few years, Ton has become a revolutionary force in a field that would seem unlikely to generate many — the Kafkaesque-titled Operations Management. The problem results from the way many companies consider their workers. Ton, however, argues that workers are not merely a cost; they can be a source of profit — a major one. I was thinking about this as my wife and I re-entered Ikea.

Top 10 Must Have Features in O/R Mapping and Code Generator Author: Iqbal M. Khan O/R mapping tools are becoming more popular each day and people are realizing the productivity gain they provide to developers. Yet, many people don't know enough about O/R mapping to consider using these tools and many others are weary of using any code generators (including O/R mapping tools). In this article, I will try to educate you about the various important features that a good O/R mapping tool would provide you and how it can be beneficial to you. What is O/R mapping? If you're developing an object oriented application that requires a relational database, you'll need to develop persistence objects that are modeled against your database design and know how to interact with different tables in the database. An O/R mapping tool connects to your database and reads its schema, then lets you map persistence objects to database tables and views, specify single-row transactional operations, queries, and stored procedure calls as methods to these objects. Conclusion

| Inspirations and Innovations in the world of Education BBC Learning English | For teachers | Talking Business Scalable System Design Patterns Looking back after 2.5 years since my previous post on scalable system design techniques, I've observed an emergence of a set of commonly used design patterns. Here is my attempt to capture and share them. Load Balancer In this model, there is a dispatcher that determines which worker instance will handle the request based on different policies. The application should best be "stateless" so any worker instance can handle the request. This pattern is deployed in almost every medium to large web site setup. Scatter and Gather In this model, the dispatcher multicast the request to all workers of the pool. This pattern is used in Search engines like Yahoo, Google to handle user's keyword search request ... etc. Result Cache In this model, the dispatcher will first lookup if the request has been made before and try to find the previous result to return, in order to save the actual execution. This pattern is commonly used in large enterprise application. Shared Space Pipe and Filter

Engaging Thinking | Mind Mapping with Mindomo Mind Mapping is a fantastic tool that helps students (and teachers) to visualise thinking in an organised way. Personally, mind maps have helped me to learn a vast amount amount of information without needing to read through pages of endless notes. Mindomo is an online application where users can create, view and share mind maps in their browser. What I really like about Mindomo is that it creates mind maps according to the Buzan structure: A central image with branches and sub branchesAll writing presented on horizontal branchesEach branch and corresponding writing are colour codedImages linked to keywords The program gives you the flexibility to change the visual features, layout, font, colour and theme of the map. I would really like to hear whether or not other educators have had success with this program! ‘New Horizons’ in engaging technologies The New Horizon 2011 report has just been released and is a ‘must’ read for any innovative educator. Key Trends 1.

Teaching Economics-Game choice First, choose your game here to get logins and passwords for your students (max: 100 players for each game). Industrial Organization Price discrimination, vertical differentiation and peak-load pricing Players take price and quantity decisions for an airline on a given route against a robot competitor. Illustrates notions such as marginal cost/average cost, variable cost/fixed cost, sunk cost, short-run/long-run cost, price discrimination (yield management), elasticity of demand, peak-load pricing... And eventually, players must choose whether or not to use vertical differentiation to soften competition. Try the demo to have an idea. Short Market Games - Introductory Microeconomics The 5 market games below can be played on their own or one after the other: Instructor's Guide Demand is the same in all of the games and is proportional to the number of players on the markets (Demand data). Oligopolistic price competition for differentiated products. Try with one player to have an idea.

USA Visitor Visa - Sponsor Documents The following documents need to be sent from the person who is sponsoring his/her relatives (or anyone else such as friends) to visit the United States. Please send these documents to the person whom you are sponsoring. Do not send it to the U.S. Embassy or Consulate. Please send completed and legible documents. Wherever possible, send computer printed or typed documents to avoid any confusion. If you are sponsoring multiple people at the same time (such as both parents), you should send separate I-134 forms for each person. Form I-134, Affidavit of Support Form You will need to show that you can financially support your relatives while they are in the U.S.

The 25 Worst Passwords of 2011 The annual list of the 25 worst passwords is out, based on actual compromises. After all these years, why are "monkey" and "qwerty" still on this list? Whenever idiotic passwords are discussed, the following story always comes up: five years ago, a group of Slovak hackers breached Slovakia's National Security Bureau (abbreviated NBU), which stores tons of classified information. It was an easy hack. What's even worse? That was five years ago, but bad passwords still abound. Many of the passwords are sequential numbers like "12345" or "654321," while others contained messages like "letmein" and "trustno1". 1. password If you, like me, are rather scatterbrained, perhaps it's time to invest in a password management app which generates unique passwords for you and stores them under one password-protected program. A few months ago a software architect at Microsoft, compiled after the Sony PSN hack, revealed that most of us have three, easy-to-crack passwords.